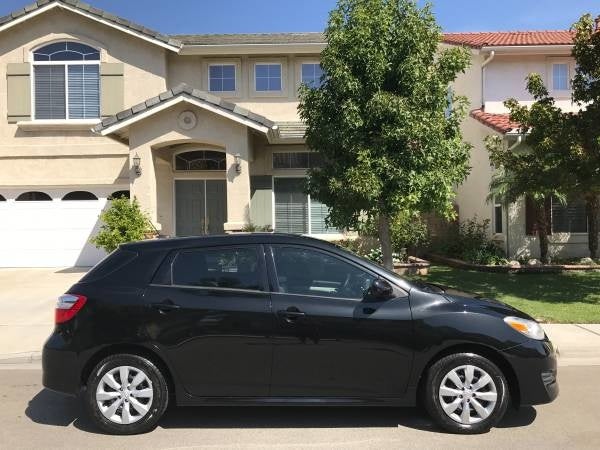 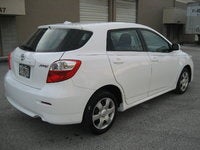 The 2012 Toyota Matrix compact hatchback fills a niche as an affordable, functional vehicle, with plenty of interior cargo space, available all-wheel drive and decent fuel economy when equipped with its base engine.

The 2012 Matrix lags behind some of its competitors when it comes to the quality of its interior materials and components, and small rear windows restrict visibility out the back.

Designed for younger buyers who seek a functional entry-level vehicle, the Toyota Matrix treads water for 2012, with no new improvements and a base engine that struggles at times. Critics remain unimpressed with the Matrix's performance and handling, as well as the quality of its interior materials, but generally owners like the compact hatchback, citing its exterior styling and cargo space as reasons for buying. Prospective buyers can probably find similar vehicles that offer more value for the money, but the Toyota name continues to draw in customers who find that the Matrix fits their specific needs.

Following a design refresh in 2011, the Toyota Matrix compact hatchback receives no new updates for 2012. Now in the midst of its second generation, the Matrix draws some of its underpinnings and mechanical components, as well as its base powerplant, from the Toyota Corolla. Out front, the cars even resemble each other, although the Matrix's 4-door hatchback body style help it stand out in the automaker's lineup. Like the Corolla, the Matrix remains an entry-level vehicle aimed at young buyers, thanks in part to its overall functionality and cargo-carrying capability. In addition, the Matrix offers available all-wheel drive (AWD), which gives it a leg up on its competition.

However, in other important areas, such as performance and the quality of its cabin materials, the Matrix lags behind some of the other vehicles in its class, which include the Honda Fit, Ford Focus, Toyota Prius, Volkswagen Golf and Mini Cooper. For 2012, the Matrix again comes in Base and S trims, as well as in an S AWD version. The Base and S trim levels are powered by two different engines, and the S trims receive a sport-tuned suspension and beefier brakes.

The Matrix displays a tall, narrow exterior profile with a sweptback roof and swoopy sidelines that extend from the headlights to the taillights, with a pronounced arc over the front wheels. The sculpted hood, mesh grille and lower air intake out front provide sporty design cues, but critics generally aren't impressed with the Matrix's design, calling it bland and boxy. In addition, small rear windows and thick C-pillars restrict visibility out the rear. All Matrix trims receive such exterior features as halogen headlights, daytime running lights, side rocker panels and heated exterior mirrors. The sport-oriented S trim adds unique sport front and rear bumpers and integrated foglights, as well as an available spoiler.

Two different engines drive the Matrix. Power for the Base trim continues to come from a 1.8-liter 4-cylinder engine with dual variable valve timing. Shared with the Corolla, the base powerplant produces 132 hp and 128 lb-ft of torque, and links to either a 5-speed manual transmission, which comes standard, or a 4-speed Electronically Controlled automatic Transmission (ECT). The engine posts decent fuel economy numbers of 26/32 mpg with the manual transmission and 25/32 with the automatic.

The 2.4-liter 4-cylinder engine driving the Matrix S trims pushes horsepower to 158 and torque to 162 lb-ft, delivering a sportier ride. Toyota also tweaks the exhaust system to improve performance. Transmission choices include the 5-speed manual, which comes standard, or a 5-speed electronically controlled automatic transmission with a manual-shift feature. The EPA estimates fuel economy numbers of 21/28 mpg with the manual shifter and 21/29 with the automatic.

Both engines drive the Matrix through the front wheels, although owners can add AWD to the S trim. The AWD system features active torque control, which balances traction and handling, and intelligently and automatically switches from front-wheel drive to AWD, depending on road conditions. When equipped with AWD, the S trim's transmission reverts to the 4-speed automatic, and fuel economy numbers drop to 20/26.

Although the base powerplant provides adequate power, it struggles sometimes at passing speeds or on inclines, especially when heavily loaded. The larger 4-cylinder in the S trims does a better job of moving the Matrix along, especially when accelerating from a stop. Performance doesn't noticeably improve with the manual shifter, or suffer due to the AWD configuration, according to testers. Though the Matrix's fuel economy numbers aren't dismal with either engine, they don't match up against the best in the class, since some competitors, like the Honda Fit, post numbers well into the mid-30s, and when equipped with a special package, the Ford Focus gets up to 40 mpg from its 4-cylinder engine.

Overall, the Matrix delivers a comfortable though unexciting ride. Testers say it exhibits too much body lean in corners, and the nose tends to plow forward on quick stops. However, the AWD S trim provides extra grip for a more capable ride, although reviewers agree that the Matrix's tall stance makes it prone to buffeting in high winds.

The Matrix's cabin delivers on functionality but comes up short in the quality of its materials, with lots of budget plastic and few padded surfaces. Reviewers also point out some flimsy components, noting that even the doors sound tinny and unsubstantial. Some also find the cabin noisy at higher speeds. On the plus side, controls are well-designed and easy to use, although some gauges are a little difficult to read.

Although upgraded in 2011, the standard feature list for the Base Matrix trim remains sparse when compared to those of some competitive vehicles. However, all the basics are present, including air conditioning, cruise control, a tilt/telescopic steering wheel, remote keyless entry and power windows and door locks. Cloth upholstery comes standard, with manual adjustment for the front seats, a fold-flat front passenger seat and a 60/40-split fold-flat rear seatback. The 4-speaker AM/FM audio system includes auto sound leveling and an auxiliary input jack.

The S trims add sport cloth upholstery, metallic interior trim and a sport steering wheel with metallic accents, as well as an upgraded 6-speaker audio system. Options include a leather-wrapped steering wheel, a power tilt/slide moonroof and a premium audio system with Bluetooth, SiriusXM satellite radio and a USB port. Leather upholstery and navigation are not available as options on any Matrix trim.

While Matrix owners admit their vehicles won't break any land speed records, they generally have positive things to say about the compact hatchback. For the most part, owners find the Matrix's performance acceptable and its ride firm but comfortable. They also note that the Matrix is fairly stable on the road, with smooth acceleration, although some owners would like better feedback from the steering system. The low-budget cabin materials don't seem to bother owners too much, who instead praise the vehicle for its cargo-carrying capabilities. Owners also are generally pleased with the vehicle's fuel economy numbers.

Rearward visibility remains a problem with owners, and a few found the base engine underpowered and noisy. But with relatively comfortable seats, a somewhat unique exterior design, a tight turning ratio and city-friendly driving dynamics, the Matrix meets the needs of most of its owners.

Have you driven a 2012 Toyota Matrix?
Rank This Car

How Do I Put My Car For Sell On Car Gurus

trying to sell my car

15 views with 3 answers (last answer about a week ago)