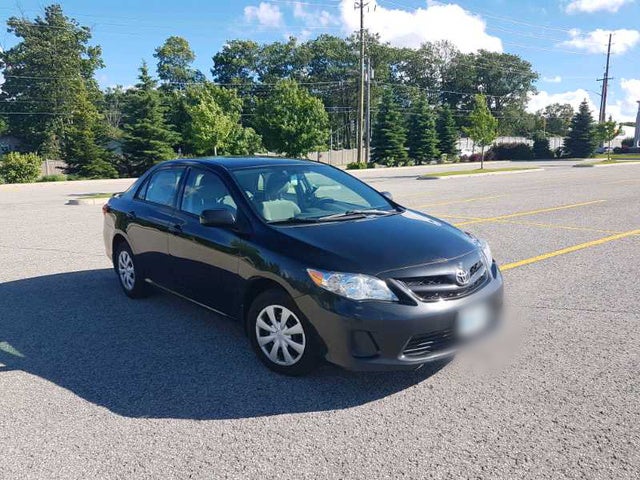 The best-selling Toyota Corolla, which continues to attract buyers due to its solid reputation and reliability, receives a few new standard features for 2012, including a USB port for all trims, power windows and keyless entry for the Base L trim, and a new audio system for LE and S trims.

With its last full redesign nearly half a decade behind it, the current Corolla fails to deliver much spark and lags in styling, interior design quality, technology and performance when compared to competitors such as the Hyundai Elantra and the Ford Focus.

While the Corolla remains popular with buyers due to its reliability, functionality, solid build quality and good reputation, it's definitely showing its age, especially when compared to other very competitive vehicles in the compact class. Although Toyota adds a few new standard features for 2012, it's not enough to make the popular car a compelling purchase this year, especially when a number of vehicles offer better value for the money. Fuel economy suffers as well due to an outdated automatic transmission and underpowered engine. Only a good deal would make this car worth a look.

Deep into its tenth generation, the Toyota Corolla shows signs of age, despite a mild refresh in 2011. While it continues to be a reliable and affordable vehicle, the Corolla has become just another generic compact sedan with an indistinct design, a feature-poor interior and questionable mileage numbers that are severely tested by competitive vehicles.

Toyota has taken steps to keep the Corolla competitive for 2012 by adding a few standard features along the line. All trims, including the Base L, the mid-level LE, and the high-end S, receive a USB audio port as standard equipment, and the Base L sedan finally gets power windows and door locks as well as remote keyless entry. In addition, the LE and S trims receive a new audio system, Bluetooth and steering-wheel-mounted controls. The LE also offers optional integrated fog lamps, a moonroof and a touchscreen for the music system, a first for the car. The sportier S trim includes double-stitched seats. Both the Base and S come standard with a 5-speed manual transmission, although owners can add a 4-speed automatic. The LE comes only with the automatic shifter.

The problem is, there are many other choices in the Corolla's class and price range that are roomier, more powerful, better equipped and more fun to drive. All trims except the S seem to lack the zip of other cars in their class. And its 26/33 mpg numbers don't match those of other vehicles in the compact class.

On the plus side, Toyota makes cars that run hundreds of thousands of miles. Aside from recent recalls, owners trumpet the reliability of their Corollas time and time again. This is a commuter car, not a sports car, and its performance reflects that.

As you'd expect with an affordable commuter car, a fairly anemic 1.8-liter, 132-hp 4-cylinder drives the 2012 Corolla, so don't expect sports-car speed. The Corolla's performance isn't going to take anyone's breath away. But it's quiet, even on the highway, and serves its purpose for around-town driving.

Critics have hit the Corolla for its 4-speed automatic, which seems woefully outdated, especially when the new Camry, just a step up the line, equipped comes with a new 6-speed automatic shifter. As a result, the Corolla's drivetrain just doesn't deliver the torque (128 lb-ft) and fuel economy that many of today's buyers seek, even in an economy car. The lack of torque is especially noticeable when accelerating under a full load, merging into traffic, climbing hills or passing at highway speeds.

Just as the 2012 Corolla's powerplant underwhelms, so do its handling and braking. The steering feels light and unresponsive with a lack of feedback, critics note, resulting in a disconnected driving experience, while the brakes can feel jerky at times, although in typical driving situations most critics find the brakes adequate. Similarly, under typical driving conditions the Corolla holds the road well, although it tends to exhibit some body lean in tight corners at higher speeds, and there's some nosedive under heavy braking.

On the plus side, drivers find the Corolla's ride fairly smooth and comfortable, especially for commuter driving. Engine noise is minimal, and unless it's pushed, the Corolla behaves well. However, over rougher roads, some drivers do note occasional intrusions of bumps and jolts into the cabin.

Inside the 2012 Corolla, there's nothing to get excited about. It’s a standard Toyota interior, emphasizing function rather than dazzling design. In fact, many call the Corolla's interior boring and unimpressive, given the lack of color choices and upgrades. Many also consider it sparsely equipped, although the recent additions of some standard equipment for 2012 helps a little in that department.

The Corolla gets good marks for its seats, which drivers generally find comfortable, even on long trips. There's plenty of headroom for taller drivers, although some find the limited tilt of the steering wheel problematic. And typical of compact cars, the back seat can be a tight fit for taller passengers. On the plus side, the controls are relatively easy to use, although somewhat dated in appearance. In addition, after removing center-console side pockets for the 2011 model year, Toyota bowed to consumer pressure and reinstated them for 2012, providing a nifty and convenient way to keep the car clutter-free.

Interior options include Toyota's navigation system with Entune, which is available for the S and LE trims. The automaker's new optional Entune multimedia system supports mobile apps and provides access to live weather and traffic reports, as well as sports and stock information. The Entune system also offers access to iHeartRadio and Pandora music services. In addition, owners can add a power tilt/slide moonroof as an optional feature.

The Corolla offers 12.3 cubic feet of cargo space in the trunk, which is fairly typical for a compact car. Again, however, some vehicles in the same class offer close to 15 cubic feet of space, putting the Corolla behind its competitors in yet another category.

Despite the recalls of a few years ago, Toyota remains bullish on the safety of its vehicles, and the Corolla is no exception. It comes standard with 6 airbags and the automaker's Vehicle Safety Control package, which includes antilock brakes, electronic brakeforce distribution and brake assist.

The Corolla does especially well in front impact and rollover crash testing, although it was rated lower in side crashes. It was named a Top Safety Pick by the Insurance Institute for Highway Safety, and the National Highway Traffic Safety Administration gave the Corolla 4 out of 5 stars for front and side impact tests.

What it lacks in terms of stylish good looks and well-appointed cabin the Corolla makes up with its reliable and economic operation, as well as its functional interior. Some owners even call the cabin "roomy" and note that the Corolla is "trendy." The Corolla's build quality is also very good, according to owners. Although the Corolla handles well, acceleration remains weak. Maintenance costs are about average for a compact car, although some owners consider the Corolla's buying price too high and note that fuel costs can be high as well for a car this size.

What's your take on the 2012 Toyota Corolla?

Arun I had a 2007 Mercedes Benz E 280 4matic which died in the vicious Canadian winter. I saw my neighbors Corolla working fine right through and decided to give it a try. Just bought one to replace my Benz.

Nazar_420 Must reply on time to deal Thnx

Users ranked 2012 Toyota Corolla against other cars which they drove/owned. Each ranking was based on 9 categories. Here is the summary of top rankings.

Have you driven a 2012 Toyota Corolla?
Rank This Car

Every once in a while, my corolla doesn't show any sign of life, either the engine or the electronics, when I get in and try to start it with the key. Every time, I scramble for a second until I rem...

Why My Check Engine And Trac Off Light Came One And The Motor Is Vibriating...

Yestesday my toyota corolla sport 2012 was runing fine. This morning whe I star the car the check engine and the trac off light came on. The motor start shacking like it want to turn off? I review...

Is the track off a d engine light stop my Corolla from excelerating?

Smog Check For My Car Did Not Pass Because I Had The Maintenance Engine Lig...

364 views with 3 answers (last answer about a month ago)

and checked with dealer ship. code p219a bank 1- air fuel ratio imbalance came expensive to diagnose and repair any one with same experience?

16 views with no answers yet