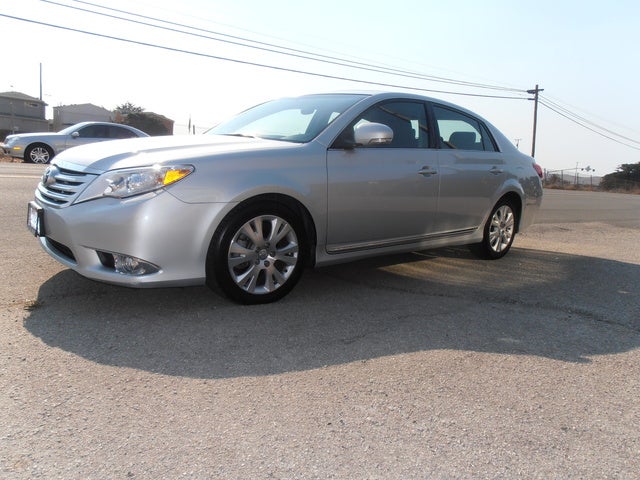 A classy cabin, adult-friendly rear seating, high safety scores and reliability ratings, as well as a strong and efficient V6 engine and comfy ride capabilities are among the 2012 Avalon’s strong points.

For those who need a dependable and roomy family sedan, the 2012 Toyota Avalon might be just the thing. Loaded with standard amenities, powered by a smooth V6, long on room, comfort, resale value and reliability, this feature-laden 4-door has what it takes to make it all but a member of the family. The only downside is that most of Toyota’s full-size sedan rivals offer pretty much the same things for significantly less money.

Only as upscale as it needs to be, the 2012 Toyota Avalon full-size sedan won’t be mistaken for a Bentley, a Cadillac or even a Lincoln, but it does have a distinctly family-oriented, well-garnished feel. Quiet, comfortable and quasi-classy, this 5-passenger 4-door underwent a considerable redesign in 2011 and stands pat for this year as far as any significant upgrades are concerned.

Again available in two abundantly well-equipped trims, the entry-level Base and top-shelf Limited, this spacious sedan keeps its snow-busting front-wheel drive (FWD) and a single peppy yet fuel efficient V6 powerplant. Since its introduction for the 2005 model year, the Avalon remains planted on a Camry chassis and continues to boast hefty ride comfort, but little in the way of driving excitement. Cabin ambiance and room, however, not to mention some 14.4 cubic feet of trunk space make for pleasant long-haul occupancy and a hefty portion of luggage-, grocery- and gear-toting ability.

Before kicking this classy Toyota sedan’s tires, however, prospective buyers might want to check out the eye-opening Chrysler 300 lineup or Buick’s creamy LaCrosse. And, of course, the tech-savvy Ford Taurus should be put on the short list, as well as Hyundai’s surprisingly upscale Genesis. Compared with such rivals, the Avalon unfortunately suffers from its more staid design, slightly less refined performance and, alas, a significantly elevated initial cost.

Do not, however, dismiss the Avalon out of hand. This is an automobile that’ll stand the average middle-size family in good stead for cross-town errands and cross-country drives, while getting mom or dad to work in laid-back comfort and style, all while staying well inside the fuel budget. 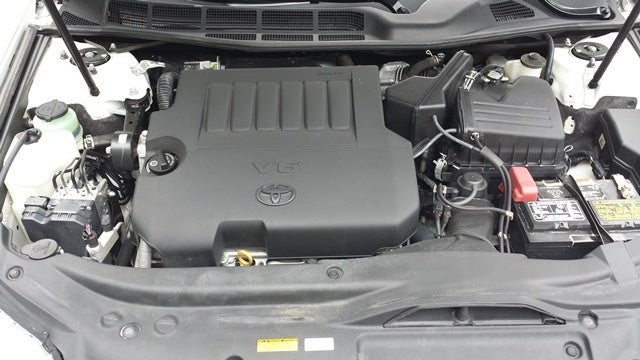 A competent variable-valve-timed (VVT) 3.5-liter V6 engine once more gives the 2012 Avalon its muscle. The brain, meanwhile, remains a 6-speed shiftable automatic transmission, with the two combining for 268 hp at 6,200 rpm and 248 lb-ft of torque at 4,700 rpm.

Fuel economy is pegged at 19 mpg city/28 highway, and should the urge to pull a small trailer become overwhelming, towing maxes out at 1,000 pounds with the proper equipment.

Tests of the Avalon’s powertrain performance have it scooting from 0-60 mph in 6.8 seconds, which reviewers find better than average for the class. All this oomph means a plethora of power for normal highway maneuvers, while a chirp or two from a stop is not altogether out of the question. Finally, according to virtually all reviews, the 6-speed shiftable automatic provides alert and glitch-free downshifting in either automatic or auto-manual mode, while engine noise on hard acceleration is noted to disappear completely at cruising speeds.

Boasting a tried-and-true 4-wheel independent suspension, Toyota’s 2012 Avalon is further steadied by MacPherson struts all around, as well as stabilizer bars in front and rear. Both trims again flaunt 17-inch alloy wheels mounting all-season tires, with the combination again boasting a pleasantly bump-absorbing ride quality. More than a few reviewers note that this Japanese sedan’s ride has become a bit stiffer since the jump from 2011’s 16-inch wheels and tires, and that it doesn’t handle broken pavement with quite as much aplomb, but overall ride comfort remains an Avalon hallmark.

If it’s driving excitement that you want, however, be advised that according to virtually all reviews, competitors do significantly better than Toyota’s stately sedan in that regard. Much body lean is evident in corners, say the majority of reviewers, while steering, though adequate, remains a bit ponderous. Further, some big-car wallow will let driver’s know that they’re not driving a Ferrari. Reviewers do note, on the other hand, that cabin noise is pretty well damped, with what little road and wind rush there is essentially reduced to a whisper, even at highway speeds.

Finally, braking tests found the 2012 Avalon coming to a stop from 60 mph in 129 feet, which testers claim to be slightly farther than the class average.

Another trademark of the 2012 Avalon is the number and quality of the standard appearance, comfort and convenience amenities with which this full-size 4-door is endowed. The Base trim, for instance, comes with a power sunroof and heated power-adjustable mirrors outside, with leather upholstery and power-adjustable front seats with driver’s side power-adjustable lumbar support, as well as reclining rear seats with a pass-through center armrest, and leather, simulated wood and simulated alloy cabin accents.

Of course, cruise control is standard in this entry-level trim, as are telescoping tilt-wheel steering and a leather steering wheel with mounted cruise and audio controls. Further convenience factors include a universal remote garage door opener, auto-dimming rear-view mirror, remote power door locks, power windows and a rear-view camera, all of this embraced by dual-zone climate control. Tech-wise, look for standard Bluetooth hands-free communications, and an MP3-capable single-CD player with 9 speakers, satellite radio and a USB port.

Many of the Limited’s standard goodies can be delivered as optional equipment in the Base Avalon, while both trims can be equipped with the Preferred Accessory Package that boasts floor mats and a glass breakage sensor, or with the Protection Package, boasting rear bumper appliqués and door edge protection. Remote engine start is also available in either trim, as is a rear spoiler and/or an Emergency Assistance Kit, with, among other things, blankets, poncho, emergency flashers and a flashlight. Finally, both trims can also be delivered with an optional voice-activated touch-screen navigation system.

Reviewers remain impressed with the quality of the Avalon’s cabin materials and workmanship. Rear-seat room again comes in for especially high praise from reviewers, while large doors mean easy-in/easy-out, and lots of glass keeps visibility far better than average all the way around.

Alas, most reviewers do find many controls to be a bit on the fussy side, with an overabundance of distracting push-button functions. A number of reviews also pan the Avalon’s rather gauche headliner, declaring the cheap, fuzzy look a bit outdated for modern tastes. Finally, the rear seatbacks have been panned in many reviews for lacking the popular fold-down feature, though this is due to the fact that they recline.

In finding that it consistently scores a top-ranked Good in all testing criteria, the Insurance Institute for Highway Safety (IIHS) gives a Top Safety Pick Award to Toyota’s 2012 Avalon sedan. Meanwhile, the National Highway Traffic Safety Administration (NHTSA) has tested this fulsome 4-door only for rollover protection and gives it a second-best 4-star rating.

Some seriously lackluster handling qualities, tepid exterior styling and an overabundance of those pesky push-buttons are among the more notable owner gripes concerning the 2012 Avalon lineup. Further owner complaints are heard regarding its lack of decent towing ability, though why this should be a problem is a bit of a mystery. Meantime, several owners complain that the available navigation system is not quite up to snuff, while even the JBL audio system comes in for a bit of owner dissatisfaction, with most questioning its actual worth given that it costs some significant extra money.

By far, however, owners prefer to talk about the positives in Toyota’s suave sedan, with such praises embracing its decent mileage numbers, V6 power, comfortable cabin ambiance and hefty safety scores. Cabin quiet also comes in for owner kudos, as do this full-size 4-door’s reliability and resale value.

Have you driven a 2012 Toyota Avalon?
Rank This Car

I own a 2012 Toyota Avalon Limited. Last week while driving my screen went dark. The radio functions still worked but the screen was totally dark. I tried turning the display on and off to no avail...

2012 Avalon Has A Dragging Feeling On Road

I hope someone could offer me some guidance. I own a 2012 Toyota Avalon Limited. Last week while driving my screen went dark. The radio functions still worked but the screen was totally dark. I trie...

Does The Spare Tire In A 2012 Toyota Avalon Have A Low Pressure Tire Monit...

639 views with 2 answers (last answer about a year ago)