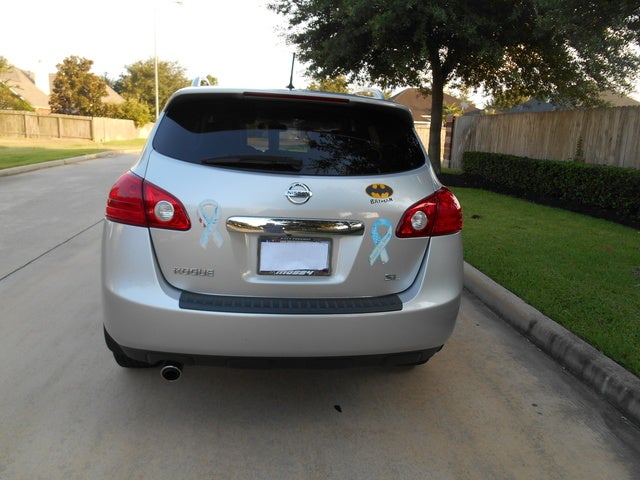 A comfortable and inviting cabin and efficient 4-cylinder engine are complemented by better-than-average handling, a classy appearance and some innovative storage features in Nissan’s 2012 Rogue lineup.

The four-banger, though miserly, isn’t as peppy as those in most rivals, while a noisy CVT automatic and a dearth of cargo room keep the 2012 Rogue well down the list of preferred family autos.

Although it isn’t exactly sexy, Nissan’s 2012 Rogue is inexpensive to own, easy on the eyes and a kick to drive. A comparative lack of cargo room and a 4-cylinder drivetrain that produces more ruckus than roar, however, could prove nettlesome. Folks might want to check out the competition before committing to this middling mini-ute.

Good looks, a reasonable base price, heady driving dynamics and an interior among the best in its class aren’t quite enough to elevate Nissan’s 2012 Rogue compact crossover to the top of the family-auto wish list. This 5-passenger quasi-ute certainly isn’t the most refined of commuter cars… heck, it’s based on the rather ho-hum Sentra sedan, so what do you expect? But, in its defense, few crossovers offer its combination of frugality, agility, safety and reliability, and fewer still provide the cabin ambiance, and these features have all been Rogue trademarks since its debut for the 2008 model year. Alas, among the things that need work in this mini-ute, the stress of its crick-inducing rear seat and overall ride comfort could be measurably improved, while a few more ponies wouldn’t hurt, either.

In any case, only two trims, the S and SV, represent this cute crossover’s lineup, though a new Special Edition Package can be added to the base S trim, effectively transforming the S Special Edition into a measurably more posh sub-trim. Of course, the Japanese automaker again makes available the well-endowed SV w/SL Package (aka the Rogue SL) sub-trim for this year, as well.

In any case, all trims are powered by a notably efficient, if not precisely neck-snapping, inline 4-cylinder (I4) powerplant, and all are available with full-time all-wheel drive (AWD). Cabin storage is touted by reviewers as better than average, but the Rogue’s cargo area measures only 57.9 cubic feet with the rear seats folded, though almost 29 cubic feet aft of the rear seatbacks ought to handle a weeks worth of groceries with no problem. Oh, and, just in case the bargains at the mall were too good to pass up, the SV and SL trims boast a fold-flat front passenger seat, while the rear seats in all trims fold nearly flat with the push of a button for easier loading. Finally, in addition to the available Special Edition package, an optional 360-degree camera and a couple of new wheel designs debut on the 2012 Rogue.

So if there’re a couple of kids in the future, or you just want to have some fun on the commute, the Rogue ought to fit your needs nicely. Just don’t try to pack more than two almost average-sized adults into the back seat, and for heaven’s sake, don’t try toting that new refrigerator home with it. 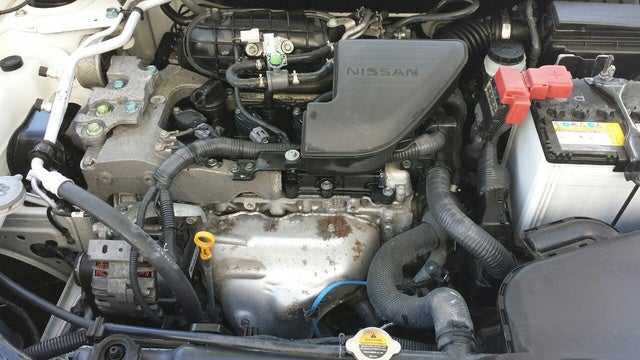 Said AWD system, by the way, is Nissan’s Intuitive AWD, which splits torque 50/50 between front and rear wheels for normal cruising. When called for, this brainy transmission automatically shifts torque from the wheels that slip to the wheels that grip in traction-challenged conditions. Finally, the Intuitive AWD system splits torque 70% to front wheels and 30% to rear when cornering to assure firm footing and confident control.

Tests of the Rogue’s I4 drivetrain had a FWD version going from 0 to 60 in 8.6 seconds, which is reasonably rabbit-like for the class. Most reviewers indeed find the four-banger adequate from a stop when maneuvering in downtown traffic, but they also note its power-challenged passing and merging capabilities, and forget about scampering quickly up anything but a gentle slope. The CVT performs well enough, according to most reviewers, but virtually all note its disturbing whine during even moderate acceleration. In summation, a majority of reviewers feel the Rogue’s underachieving I4 is not the most refined or competent powertrain out there.

In a neat juxtaposition of performance versus power, the 2012 Rogue lineup is touted in nearly all reviews as the most entertaining drive in its class. Its sedan-based chassis is complemented by a 4-wheel independent suspension, front MacPherson struts, a multi-link rear suspension and stabilizer bars in front and rear. Steering is described in most reviews as precise and stable, though fast corners bring on some distracting body lean, and wind-swept roadways might lead to some white knuckles trying to stay between the dotted lines. In downtown traffic and crowded parking lots, however, the Rogue’s compact profile and tiny turning radius beget a far easier time of it than others in its class.

Reviewer opinion is mixed as to this cute ute’s ride quality. A number of reviewers mention that the Rogue is well mannered over most surfaces, with the 16-inch, 17-inch and 18-inch tires in the respective trims (and sub-trims), as well as the solid chassis providing adequate bump cushioning and, on a calm day, surprising highway stability. Other reviews, however, chastise Nissan’s compact crossover for its frustrating rock and roll over even marginally rough surfaces, saying it rides far less comfortably than many of its competitors.

In any case, braking is described by virtually all reviewers as potent and dead true, though at least one review noted the pedal to be just a bit too finicky.

Though not in the same class as, say, the Honda CR-V, Nissan’s 2012 Rogue crossover has nothing to be ashamed of, features-wise. Its base S trim, for instance, boasts steel wheels and a rear spoiler outside, while the cabin comes with cloth upholstery, remote power door locks, power windows and mirrors, cruise control and tilt-wheel steering. Of course air conditioning is standard, as are the simulated alloy cabin accents and steering wheel. Entertainment, meantime, consists of an MP3-capable single-CD player with 4 speakers.

For 2012, the optional S Special Edition Package adds 16-inch aluminum wheels and a bunch of other stuff that comes standard on the SV, while the SV can be delivered with the Premium edition package with navigation, auto climate control and 8 Bose premium speakers with a subwoofer.

Most reviewers find this mini-ute’s cabin to be a bit too raucous for real auditory comfort, though seats are described as comfortable and roomy enough for the long haul. Though not exactly luxurious, the Rogue offers a cabin that matches up well with rivals, according to many reviewers, with quality materials and workmanship, large, easy-to-read gauges and well-placed controls. The navigation display comes with some downsized buttons, note a number of reviewers, but these don’t really distract, and the system itself is intuitive and functional.

If there’s one major cabin bugaboo that reviewers chew on, it’s the poor visibility to the rear. The combination of thick rear roof pillars and the small, raked rear window induce most reviewers to recommend, besides installing the optional rear-view camera in the S trim, judicious and frequent use of mirrors and the Mark I eyeball when in reverse.

In its intended role as a fun-loving family automobile, the 2012 Rogue comes with all the usual standard safety features. Four-wheel antilock brakes (ABS) with electronic brakeforce distribution and emergency braking assist, along with traction and stability control, front and rear head airbags, dual front side-mounted airbags and active front headrests, are standard across the lineup. A remote antitheft alarm is also standard for all trims, while front fog/driving lights are standard in the SV w/SL Package and optional for all other trims. The SL Package additionally sports standard dusk-sensing high-intensity discharge (HID) headlights.

Tabbed as a Top Safety Pick for 2012, the Rogue garners scores of Good across the board in testing from the Insurance Institute for Highway Safety (IIHS). The National Highway Traffic Safety Administration (NHTSA), meantime, also gives Nissan’s crafty crossover some pretty good safety scores, with its second-best 4-star rating overall. Front impact and rollover tests each grab the Administration’s 4 stars, while its highest award of 5 stars is given in side-impact testing.

The lack of a V6 option disappoints a few owners of the 2012 Rogue, while the atrocious sightlines to the rear leave more than a few owners going into reverse on a wing and a prayer. Also, the noisy CVT can be distracting, according to many owners, but most say that with thoughtful throttle manipulation, the transmission can be quieted considerably.

Road and wind noise, on the other hand, are a significant bone of contention with many owners, and a hefty blind spot on the passenger side have most passing with more than the usual caution. Finally a lack of so-called handy cabin storage has a few owners scratching their heads, while the smallish cargo area doesn’t sit very well, either.

Laudable gas mileage, a reasonably well-wrought cabin, thoughtful dashboard arrangements and some surprising agility, on the other hand, put a smile on the faces of most owners. Meantime, the Rogue’s spiffy, if not statuesque styling has brought more than a few owners into the showroom, with the opportunity to make light of the commute via this compact crossover’s car-like handling also win points with many owners. Finally, value is most often the single reason many folks give for owning Nissan’s entry-level crossover ute.

timswiley 2012 Rogue - 4/27/14 - Bought in late 2011 and it has been the worst brand new car i have ever owned. It now has 45k miles and has spent a total of 3 months in the shop. Electric problems, ever 17k the cvt gets stuck in 4th gear and engine light comes on. Nissan consumer affairs got engineers involved. This means it takes your about 20 seconds to get to 50mph and your not going to go above 65 or so top speed until its fixed. They say they finally fixed it, but i will know in another few thousand miles as it happened at 17k and 34k and now waiting for 51k. Now @ 45k low idle cutout that i have to take it into the shop for. I maintained the using nissan meticulously as i needed this car to last. I has seriously been a hunk of junk. Car just does weird things, weird sounds and after they made the last "Fix" you can really hear the whining of the CVT transmission as if someone is turning a hand crank flashlight really fast. Tons of complaints on the CVT transmission issues but nothing major officially recognized by Nissan. Tim Wiley - Forney TX

Users ranked 2012 Nissan Rogue against other cars which they drove/owned. Each ranking was based on 9 categories. Here is the summary of top rankings.

Have you driven a 2012 Nissan Rogue?
Rank This Car

Why Does My Nissan Rouge Have No Price Analysis?

How Can I Keep The Doors From Automatic Locking When Driving

74 views with 3 answers (last answer about a month ago)

Rain Leaking Into Driver Side Windshield Onto Floorboard

40 views with 3 answers (last answer about a month ago)

lower control arm, inner and outer tie rod ends, sway bar link and steering rack and pinion bellow what is the best order of replacing them

40 views with 2 answers (last answer about a month ago)

I Have Already Found The Car That I Want

what if I have already found the car that I want