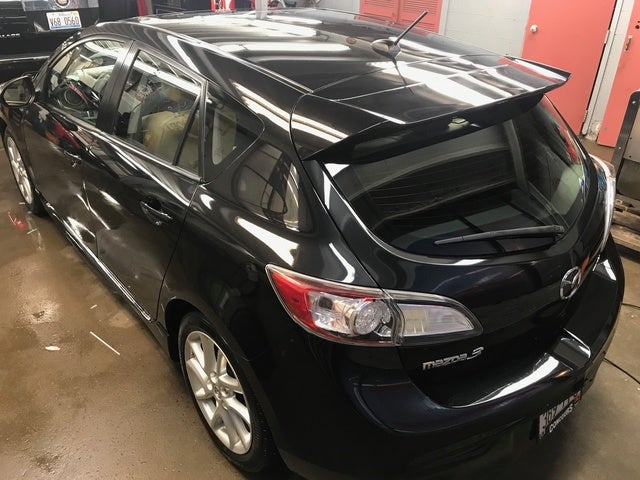 The Mazda MAZDA3 compact car receives an exterior styling update for 2012, as well as a new SkyActiv engine and transmission, which help improve fuel efficiency while ensuring responsive acceleration and peppy performance.

Some new MAZDA3 owners report that the new SkyActive engine can be noisy on start-up, since it idles high for a minute or two, and the automatic transmission can sometimes make clunky shifts, while a number of reviewers have commented on the MAZDA3's lack of cargo space compared to other vehicles in the class.

Mazda makes the MAZDA3 much more competitive for 2012 by giving it a new high-performance, fuel-efficient engine and transmission. And owners like the combination a lot. Ultimately, the MAZDA3 remains a driver's commuter car, with excellent performance and handling, while interior amenities and cargo space suffer a little when compared to some competitive vehicles.

The MAZDA3 gets an exterior facelift and a new powerplant option for 2012. For years, automotive enthusiasts have extolled the virtues of Mazda's sometimes-overlooked vehicles, citing their responsive performance and class-leading handling as reasons to consider purchasing the cars. But even though it has consistently delivered a sporty driving experience, the MAZDA3 has lagged behind some competitors in terms of styling and fuel economy. With the 2012 updating of the MAZDA3, the automaker addresses those issues head-on.

For starters, the MAZDA3 gets a freshened exterior look, with new front and rear bumpers, a redesigned front grille, and updated front headlights. New 16- and 17-inch alloy wheels are also added to the mix for 2012. But the real news for 2012 takes place under the car's skin, as it receives a new SkyActiv-G gasoline engine and SkyActiv-Drive automatic transmission, which offer significant upgrades in both power and efficiency. The new engine and transmission join existing powerplants and drivetrains, giving buyers a range of choices when it comes to performance and pricing. 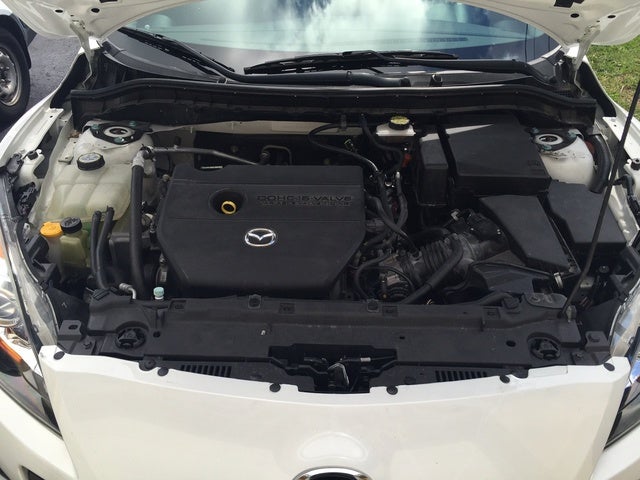 Mazda offers the MAZDA3 with a choice of three engines, depending on the trim level. The base 2.0-liter 4-cylinder engine, which powers the i SV and i Sport trims, generates 148 hp and 135 lb-ft of torque. The engine links to either a 5-speed manual transmission with overdrive or a 5-speed electronically controlled Sport automatic transmission with Adaptive Shift Logic and a manual-shift mode. Fuel economy numbers check in at 25/33 mpg with either transmission.

The new 2.0-liter 4-cylinder SkyActiv engine provides power for the i Touring and i Grand Touring trims. Thanks to high-compression combustion and an updated exhaust system, the new engine posts improved fuel economy numbers of 27/39 mpg when linked to a new SkyActive-MT 6-speed manual transmission with overdrive, and a slightly better 28/40 when mated to a new SkyActiv-Drive 6-speed electronically controlled Sport automatic transmission with a manual-shift mode. That's an increase of about 7 mpg over the base engine while providing better performance, since horsepower for the SkyActiv engine checks in at 155 hp, with 148 lb-ft of torque.

For those who prefer performance to fuel economy, Mazda also offers the MAZDA3 with its 2.5-liter 4-cylinder powerplant, available in s Touring and s Grand Touring trims. The engine produces 167 hp and a solid 168 lb-ft of torque, although fuel economy numbers naturally suffer. The big 4-cylinder posts numbers of 20/28 mpg when connected to a 6-speed manual transmission with overdrive, and a slightly better 22/29 when linked to a 5-speed electronically controlled Sport automatic transmission with Adaptive Shift Logic and a manual-shift mode.

Although all the MAZDA3's engines provide good performance, leading automotive reviewers to consistently recommend the vehicle due to its power and handling, the SkyActiv engine remains the most impressive of the bunch, due to its combination of aggressive performance and good fuel economy. Some reviewers note that the base 2.0-liter can make the vehicle feel underpowered at times, such as when passing or climbing hills, so it's no surprise to hear reports that Mazda plans to phase out the base powerplant at some point in 2012, as the automaker relies increasingly on its SkyActiv technology. Mazda says its goal is to improve the fuel efficiency of its vehicles by 30 percent by 2015, when compared to 2008 levels, and the SkyActiv powerplant is an important step in that direction.

Performance is one half of the winning equation for the MAZDA3, while ride and handling are equally important. The MAZDA3's suspension has a firm, sporty feel, so drivers who seek a softer ride may want to look elsewhere. But for those who prefer a little excitement during their daily commutes, the MAZDA3 is a perfect fit. The power rack-and-pinion with variable assist provides a crisp feel and precise handling, so the MAZDA3 goes exactly where you want it to, with good feedback. The MAZDA3 moves capably through tight corners, with minimal body lean, and the brakes provide a responsive, assured feel.

The MAZDA3 sits on a 4-wheel independent suspension, with MacPherson struts in the front, a multilink configuration in the rear and stabilizer bars at both the front and rear. The vehicle also gets 4-wheel disc brakes at all four corners. The sport-oriented s Touring and s Grand Touring get larger 11.8-inch vented disc brakes in the front and 11-inch solid disc brakes in the rear, compared to 10.9-inch and 10.4-inch disc brakes for the other trims, respectively. In addition, the s trims receive 17-inch wheels, compared to 16-inch wheels for the rest of the MAZDA3 trims.

While the 5-passenger MAZDA3 continues to excel in performance and handling, most reviewers agree that its cabin remains average for the class. Taller passengers will find limited legroom and headroom in both the front and rear seats, and cargo space remains tight. Mazda makes good use of soft-touch and padded surfaces, as well as textured plastic, to give the cabin a clean, simple look, but it doesn't live up to the cabins of some competitive vehicles in the class, such as those in the Volkswagen Golf, Hyundai Elantra, Ford Focus, and Chevy Cruze.

While the MAZDA3's performance and exterior styling were updated for 2012, the vehicle's cabin remains essentially unchanged from the previous year. Standard features for the entry-level i SV trim include power windows, a tilt/telescopic steering wheel, cloth seats with 6-way manual adjustment for the driver and 4-way adjustment for the front passenger, and a 4-speaker AM/FM/CD audio system with an audio input jack and steering-wheel-mounted audio controls. At the i Sport level, Mazda also adds air conditioning, power door locks, remote keyless entry and an ambient temperature display.

Most new buyers, however, will probably opt for the i Touring and i Grand Touring trims, which carry the new SkyActiv engine and transmission. The i Touring comes equipped with such standard features as Bluetooth, a leather-wrapped steering wheel and shift knob, steering-wheel-mounted cruise control, a multi-information display and a 6-speaker audio system, as well as an optional 265-watt, 10-speaker Bose Centerpoint Surround Sound System. At the next level up, the i Grand Touring also includes leather upholstery, heated front seats, an 8-way power-adjustable driver's seat, a welcome lighting system, a sliding center console armrest and a compact navigation system with a color display. In addition, the 10-speaker Bose audio system comes standard, with optional SiriusXM satellite radio.

The sport-oriented s Touring and s Grand Touring trims get such standard features as dual-zone automatic climate control and Mazda's advanced keyless entry system with push-button start, as well as Bluetooth, the welcome lighting system, power features and the Bose audio system. The s Touring comes with cloth-trimmed sport seats with manual adjustment for the driver and passenger seats, while the s Grand Touring gets leather-upholstered sport seats and 8-way power adjustment for the driver's seat.

Cargo space in the trunk of the MAZDA3 sedan checks in at just 11.3 cubic feet, which ranks at the low end of the scale for the class. The Hyundai Elantra, for example, offers 14.8 cubic feet, while the Toyota Corolla has 12.3 cubic feet of space in the trunk and the Honda Civic offers 12.5 cubic feet. However, the Chevy Cruze trumps them all with 15.4 cubic feet. This puts the MAZDA3 sedan at a disadvantage with prospective buyers who have families or carry lots of cargo. For those buyers, the MAZDA3 hatchback might be the answer. It offers 17 cubic feet of space with the second row up, which expands to 42.8 cubic feet with the 60/40-split rear folded down.

The 2012 MAZDA3 was named a Top Safety Pick by the IIHS, thanks to its overall rating of Good during crash tests. Specifically, the MAZDA3 received a top score of Good for protecting passengers during frontal or side-impact crashes, as well as for roof strength during rollovers. The NHTSA gave the MAZDA3 4 out of 5 stars overall, which breaks down to 5 stars for frontal crash tests, 4 stars for rollovers and 3 stars for side-impact crashes.

It should come as no surprise that owners love the MAZDA3's versatility, especially when equipped with the SkyActive powerplant. Owners say the car offers the best of both worlds, delivering good fuel economy around town while offering a sporty driving experience for those who like to toss the car around the corners. It's clear from the many positive reviews that, ultimately, the MAZDA3 remains a driver's car, with its superior handling and performance. Many even invoke the automaker's "zoom zoom" marketing slogan when describing their experiences with the car. In addition, many owners say they chose the car after test-driving a number of competitive vehicles, an indication that when prospective buyers take the time to test-drive the vehicle, they like what it has to offer.

Some owners do note that the SkyActiv engine can be noisy for the first couple of minutes after it starts, although it runs quieter once it's warmed up. Some owners also find fault with the MAZDA3's seats, which some find too firm and uncomfortable. They also find fault with the arrangement of controls and knobs on the dash and center console, which can seem confusing at first, but other owners report that they have no problems in these areas. And a number of owners report hearing "weird" noises, either from the engine or steering system. Overall, however, the majority of owners give their MAZDA3s good marks.

Users ranked 2012 Mazda MAZDA3 against other cars which they drove/owned. Each ranking was based on 9 categories. Here is the summary of top rankings.

Have you driven a 2012 Mazda MAZDA3?
Rank This Car

Where is the blower motor resistor located

I Made A Mistake When Making An Offer, Can It Be Corrected.

I made an offer, the other party countered. I wanted to further negotiate, not accept the counter offer. Then I got a message that she had accepted. I wanted to send another message but didn't u...

The Owners Manual shows an illustration of the Transmission dip stick located north east of the Oil dipstick. I have looked everywhere near and far and simply cannot find it. A lil' help, please?

Install A New Battery On A 2012 Mazda 3 Backwards, Could Someone Tell Me Wh...

How Much Would A Turbo Cost?

i SV with R Production