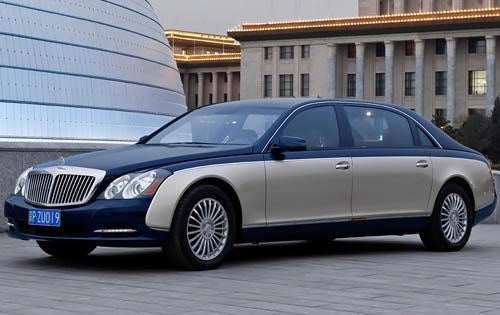 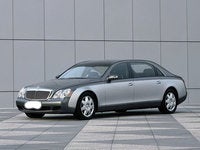 Looking for a Used 62 in your area?

CarGurus has 8 nationwide 62 listings and the tools to find you a great deal.

Turning a key is not necessary to bring the Maybach 62 to life, with its Keyless-Go system. You simply push a button on the gearshift lever to bring the monstrous engine alive. One technician builds each Maybach engine from start to finish, adding even more of a personal touch to these vehicles. Under the hood of the Maybach 62 is a 5.5-liter V12 that generates 543 hp and 664 lb-ft of torque. The Maybach 62S features the same 5.5-liter V12 with the addition of a bi-turbo, bringing it up to 620 hp and 738 lb-ft of torque. Even with a weight of over 6,300 pounds, the Maybach 62 accelerates from 0-60 in 5.4 seconds with a top speed of 155 mph. The Maybach 62S has a 0-60 time of 5.2 seconds and a top speed of 155 mph as well. Fuel efficiency is the only thing lacking in the Maybach 62, with an EPA estimated 9.6 mpg city/21.4 highway.

The ride and handling of the Maybach 62 are as luxurious as every other feature of this vehicle. It features the latest technology with an independent double wishbone front suspension and independent multi-link rear suspension. It is also equipped with an Airmatic Dual Control air suspension. The suspension has an automatic level control as well, giving every passenger in the vehicle the smoothest ride possible. The Maybach 62S “Special” trim includes a ride height reduction of 15mm, allowing for a lower center of gravity and more aggressive appearance. The brake system is also unique to the Maybach 62 and Maybach 62S, with a Sensotronic Brake Control that essentially controls the amount of braking to each individual wheel, based on the braking situation. This system works in conjunction with the Electronic Stability Control and ABS system to sense evasive braking maneuvers and keep the vehicle straight and safe. The Maybach 62S is also equipped with thicker front and rear stabilizers. The Maybach 62 comes standard with 19-inch 5-spoke rims with 275/50/19 tires. The Maybach 62S is equipped with 20-inch wheels standard and 275/45/20 tires, but much like every other option, the buyer has an array of sizes and styles to choose from for either trim.

Luxurious almost does not begin to describe the interior of the Maybach 62. The size of the vehicle alone allows more than adequate room for 4 to 5 adults, depending on whether you keep the standard 2 rear seat configuration, or choose the optional 3 rear seat setup. The interior is more like a living room than the inside of a vehicle, making you feel at home in luxury. The list of interior features includes almost anything a person could desire to personalize a vehicle. Starting with the sumptuous leather seats, both the front and rear are heated and cooled and feature multicontour seatbacks with lumbar support. The Maybach 62 is unique, as it features extending and reclining rear seats, much like those in a private jet.

These comfortable seats also feature removable pillows as part of the rear seat head restraint. Both the Maybach 62 and Maybach 62S have rear fabric window curtains for shade and privacy that are operable from any seat. For added personal comfort in any seat, the Maybach 62 has two climate control systems, one for front seat passengers and another for the rear, as well as separate controls for each passenger. As these vehicles are limousines, the back doors are longer and open wider to allow for ease getting in and out of the vehicles. To conveniently close these larger doors, standard on the Maybach 62 and Maybach 62S are electronic rear door closers that fully close the door from any open position with the touch of a button. As the Maybach 62 and 62S are often used as limousines, they feature a fully power retractable glass partition, offering privacy at the touch of a button from the front or rear of the vehicle. The partition also includes an electric curtain for even more privacy for rear seat passengers. To keep in communication with the driver when the partition is in use, there is also a front/rear intercom system.

The Maybach 62 also features a state-of-the-art multimedia system. The system includes a DVD player, 6-CD changer, Bluetooth capability, jacks for auxiliary inputs as well as dual 9.5-inch video screens. This all comes to life with a 21-speaker 600-watt Surround Sound system. Like any other option for the Maybach 62 or Maybach 62S, the buyer can customize the system to his or her own wants and needs. There is almost no outside noise noticeable in the Maybach 62, as engineers have added extra-thick window glass as well as extra insulation to silence any outside noise. A thermostatically controlled rear refrigerator for food or beverages sits under the rear center console, as well as two hand-polished .925 sterling silver champagne flutes to enjoy those beverages. One of the most unique features of the Maybach 62 is its panoramic glass roof. With the touch of a button, the panel turns opaque, and it returns to transparent just as quickly. In addition, an electronic sliding roof liner closes for ultimate privacy. The Maybach 62 also features a solar panel that powers the cabin ventilation system at all times. The ventilation system keeps the temperature in the vehicle constant even when it is not running.

To go along with all the luxury appointments in the Maybach 62 is an impressive list of safety features. From the road-sensing intelligent bi-xenon headlamps to the rear-view camera, every part in between features the best in safety features. The 62 is equipped with a Parktronic system that senses nearby obstacles at parking speed and alerts the driver to where they are with illuminated and audible signals on the dash and rear cabin ceiling. The front airbag system has a two-stage, situation-dependent triggering system. All four seats feature side airbags plus separate curtain airbags. The Maybach 62 and Maybach 62S are also equipped with a Distronic system that monitors other vehicles to the front and not only alerts the driver if they get too close, but applies the brakes as well.

As the Maybach 62 and 62S are hand-built vehicles of very limited production, the elite few that own a Maybach 62 or Maybach 62S find it to be the ultimate vehicle for business and pleasure. They find the luxury of the vehicle second to none, as well as its artisanship and elegance.

Looking for a Used 62 in your area?

CarGurus has 8 nationwide 62 listings and the tools to find you a great deal.