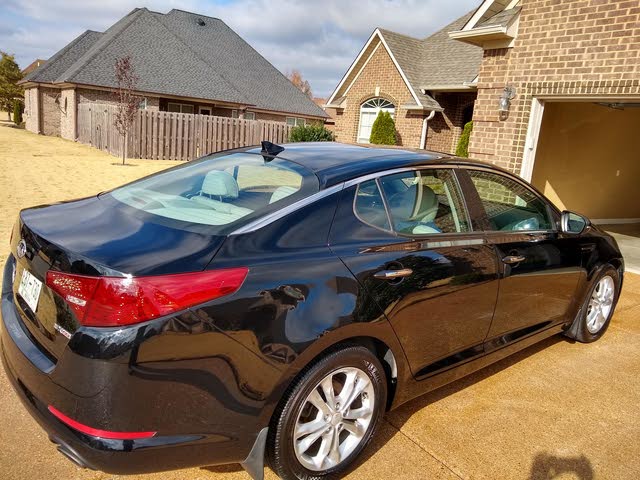 Cramped headroom, a small trunk opening, a somewhat disengaged steering feel, a noticeably degraded ride and noise level in the flagship trim and some curious deletions when certain options are selected, lineup-wide, keep the otherwise value-heavy 2012 Optima 4-door from its true potential.

An engaging drive and potent turbocharged 4-banger contribute heavily to the value factor in Kia’s feature-laden 2012 Optima lineup. Although this midsize sedan is not without its faults, it nonetheless delivers the goods in efficiency, performance and looks. All in all, Kia’s premier 4-door remains an excellent choice for a family auto.

Since its debut for the 2011 model year, Kia’s Optima midsize sedan has been a steady, if not a particularly spectacular performer. Looks, however, as well as some nimble moves and a surprisingly composed ride in the touring-oriented lower trims, are enough to convince reviewers as well as consumers that Kia offers, feature for feature, possibly the best value in its segment. Solid safety scores, an available turbocharged powerplant, better-than-average cabin room and some 15.4 cubic feet of trunk space certainly don’t hurt, nor does one of the best warranties in the business.

The stylish four-door Optima is available in three basic trims, the base LX, midlevel EX and turbocharged SX. Adding the turbocharged inline 4-cylinder engine to the EX begets the EX Turbo sub-trim, while some heady appearance bling and exotic cabin upgrades will get you the SX L sub-trim (the “L” stands for Limited). All Optimas, finally, are delivered only with front-wheel drive (FWD).

Still in its infancy, the 2012 Optima lineup sports only minor changes, several of which involve some switching and swapping between standard features and options, depending on the trim. Kia’s popular Uvo voice-activated infotainment system becomes standard on all but the base LX, and seats in all trims have been tweaked for more comfort and support. Despite these changes, Kia’s midsize sedan still has a way to go to beat Volkswagen’s resurgent Passat, Honda’s tried-and-true Accord and Toyota’s redesigned Camry. Even Kia’s parent company, Hyundai, puts up some stiff competition with its well-rounded Sonata. 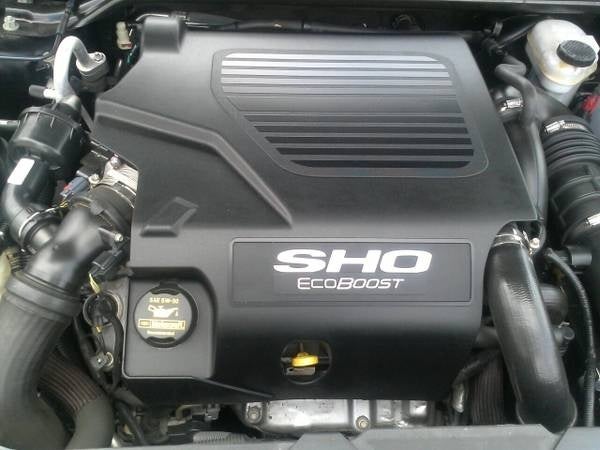 A pair of inline 4-cylinder (I4) engines powers the nifty Optima lineup, with the standard 2.4-liter normally aspirated and variable-valve-timed (VVT) edition loaded into the LX and EX trims. This peppy little four-banger mates with a standard 6-speed manual transmission on the entry-level LX for 200 hp at 6,300 rpm and 186 lb-ft of torque at 4,250 rpm. The EX, meantime, is equipped with a 6-speed shiftable automatic that puts out the same numbers and remains optional in the LX. With either transmission this efficient I4 burns unleaded regular at an estimated 24 mpg city/35 highway

The flagship Optima SX comes with a downright potent 2.0-liter turbocharged I4 and the 6-speed shiftable automatic and puts out a hefty 274 hp at 6,000 rpm and 269 lb-ft of torque at 1,750 rpm. Estimated mileage, still using regular gasoline, is 22/34. Oh, and by the way, the I4 turbo is once more available in the EX, producing the EX Turbo sub-trim.

An Optima LX carrying the normally aspirated four-banger scooted from 0-60 in 8.9 seconds, which is about the norm for the segment, while the blown I4 in the SX took the same trip in 6.5 seconds, not bad for a family sedan.

Reviewers are by and large pleased at the efficiency of the regular I4, especially with the shiftable automatic. The blown four-banger is, of course, praised for its heady acceleration, but only with judicious use of the gas pedal does it show its best fuel efficiency numbers. Additionally, a slight but noticeable turbo-lag keeps the turbocharged I4 from achieving true greatness. Several reviews also claim that with a little more refinement, some downright impressive mileage numbers can be squeezed out of the un-blown version, not to mention a bit less racket on hard acceleration.

Transmissions, both the stick and the automatic, are noted by reviewers to be smooth and responsive, with the driver-friendly ECO button handy for boosting pep in the “Off” mode, or for eking a tad more efficiency out of the 6-speed automatic in the “On” position.

Where Kia’s premier 4-door really shines in the minds of most reviewers is in its athleticism and a competent, if not exactly supple ride. With 16- and 17-inch wheels, respectively, the LX and EX trims handle bumps and imperfections notably better than their SX counterpart with its standard 18-inch alloy wheels. Fact is that more than a few reviewers pan the SX as occasionally all but brutish over bumps and dips, especially at lower speeds.

Equipped with a 4-wheel independent suspension boasting MacPherson front struts, a multi-link rear end and stabilizer bars front and rear, this nifty sedan has what it takes to turn the morning commute into an exhilarating start to the day. Admirably agile and steady in cornering and abrupt passing maneuvers, according to many reviewers, the Optima in any form feels well-balanced and under control. There are, however, a number of reviews that claim the lower trims to be suffering a numb steering feel, though all concede this snazzy 4-door is a step above most rivals, excitement-wise.

Brakes, finally, are described by virtually all reviewers as potent and true, with no appreciable pedal glitches. Testing of the LX found it took 121 feet to come to a stop from 60 mph, about average for its class, with the SX taking several more feet from the same speed.

Standard amenities in the base 2012 Kia LX include steel wheels in the stick-shift version and alloy wheels with the shiftable automatic, as well as cloth upholstery, a 6-way power-adjustable driver’s seat, heated power-adjustable mirrors, power door locks and power windows. Cruise control is standard only in those LX trims equipped with the automatic transmission, but both the stick-shift and the automatic versions sport telescoping tilt-wheel steering, a cooled glovebox, air conditioning and an MP3-capable single-CD player with 6 speakers. Satellite radio is also standard, as are a USB port and Bluetooth hands-free communications.

The EX and SX, meantime, are eligible for Uvo infotainment, navigation, driver memory settings, power-folding outside mirrors, upgraded wheels and a panoramic power sunroof in various packages or in standalone form. The SX can also be delivered with the SX L package that includes on all of the above, as well as upgraded alloy wheels, red brake calipers, unique badges and some added exterior chrome.

For the most part, reviewers remain impressed with the 2012 Optima’s high-end materials and workmanship, especially in the EX and SX trims. All revere the cooled glovebox as a classy touch, while seats, after this year’s comfort-oriented reworking, are described as nicely supportive, though rear passenger legroom is still somewhat limited. Taller front-seat occupants are decently accommodated in standard versions, but not so much when the available sunroof is selected.

Finally, gauges and controls are touted by most reviewers as easy to read and logically placed, and interior storage is lauded as far better than average. Finally, trunk space, though again above average, is noted by virtually all reviewers as inhibited by its small opening and dated sickle-type hinges.

Among the more safety-conscious sedans out there, the 2012 Kia Optima lineup sports standard 4-wheel antilock brakes (ABS) with electronic brakeforce distribution and emergency braking assist, as well as traction and stability control. Front and rear head airbags, front side-mounted airbags and front head restraint whiplash protection are also standard, as are front fog/driving lights and turn-signal-integrated mirrors. Both the EX and SX additionally sport a remote antitheft alarm that’s optional in the LX, while the SX also boasts standard high-intensity-discharge (HID) headlights. Finally, the SX can also be delivered with available LED daytime running lights and an electronic parking brake in its SXL incarnation.

Rated by the National Highway Transportation Safety Administration (NHTSA) at its best 5 stars in overall safety, Kia’s sporty sedan gained those marks across the board in front and side crash tests, as well as rollover testing.

The Insurance Institute for Highway Safety (IIHS), meantime, gives the 2012 Optima a Top Safety Pick award for its highest-possible scores of Good in all testing criteria.

Although most owners award the 2012 Optima high marks for value and performance, many are disappointed with their real-world mileage numbers, claiming their mileage isn’t even close to the figures claimed by the Korean automaker. Though such numbers are, of course, highly subjective and depend heavily on driving habits, virtually all owner complaints are accompanied by the caveat that their figures reflect rather conservative driving techniques.

Wind and road noise also make the list of owner gripes, as do issues with the noisy normally aspirated I4. Finally, build quality, poor customer service on the part of more than a few Kia dealers, cramped rear-seat legroom and some frustrations in operating Kia’s Uvo infotainment system also keep this 4-door from proving its potential worth to owners.

On the plus side, owners are happy not just with the Optima’s value, but also with its heady handling characteristics and decently compliant ride. There are also those who claim mileage to be just as advertised, while others just plain like this spiffy sedan’s looks. The turbocharged I4 is, obviously, lauded for its performance pop, with the normally aspirated four-banger garnering its share of praise for better-than-expected acceleration in virtually all driving situations.

Guru91NJ2D A lemon with inoperative outboard brake lights due to electrical problems.

Users ranked 2012 Kia Optima against other cars which they drove/owned. Each ranking was based on 9 categories. Here is the summary of top rankings.

Have you driven a 2012 Kia Optima?
Rank This Car

My Kia Optima 2012 Stopped Running In The Middle Of Me Driving It. IT TURN ...

2012 KIA OPTIMA SHUT OFF WHILE DRIVING. WONT TURN OR START AFTER CLICKING NOISE!!

I have a 2012 Kia Optima and had the engine replace a little over a year ago because of the recall. I also had them replace the starter at the same time. A few weeks ago I was getting ready to lea...

My car was running well and went off in the process...after that it won't crank even though all the accessories are working. What might be the problem with it

Why Is There No Power To Anything In The Car?

2012 Kia Optima was working fine when I went into the store. When I came out there was no electrical working at all. No locks, display, nothing. Changed out the battery and still nothing. Connection...

Oil Pressure Light Is On. Just Had The Oil Changed

I've got an appointment for Tuesday. Is the car safe to drive