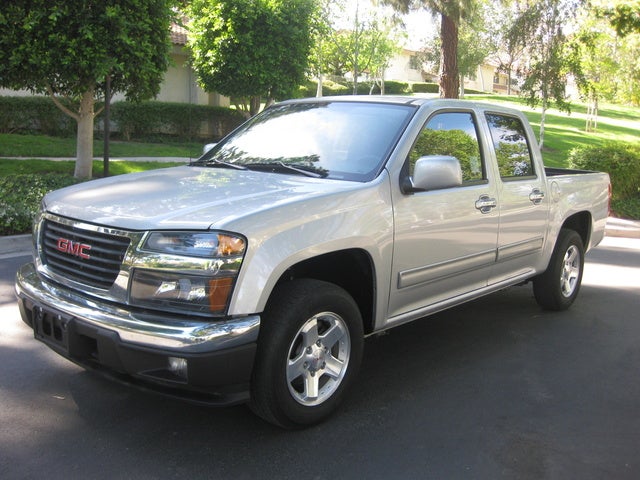 The 2012 GMC Canyon offers the same thing to truck lovers that it has for most of the last decade: a reliable and affordable smaller pickup truck with a decent ride, good especially for doing errands around town and breaking into the world of trucks. In some ways though, the Canyon has been left behind while rivals such as the Toyota Tacoma and Nissan Frontier have evolved into more refined and updated rigs.

The Canyon, like its sibling Chevrolet Colorado, never was about the frills in the first place and was much more the get-’er-done type, tailor-made for the folks with small business chores or with a lawn mower strapped down in the back or, better yet, packed with camping gear and headed for a weekend getaway. Fans of the Canyon appreciate its ability to get around in tight spots, too.

The 2012 GMC Canyon continues to promote its variety. It comes with a couple of engine choices and with Regular, Extended and Crew cab versions and in rear-wheel drive (RWD) or four-wheel drive (4WD). The 4WD Crew cabs come with a 5-foot cargo box, while the others get a 6-foot bed.

The 2012 GMC Canyon’s cabin, like the truck overall, generally collects good marks from reviewers for being workmanlike. Controls are easy to find and use and the front has plenty of room and comfortable seats. Experts feel GMC puts too many plastics in the cabin, though, and the rear seats in the Extended and Crew cab versions are quite tight. The 2012 GMC Canyon tends to draw praise for its rugged good looks as well.

The 2012 GMC Canyon has four-wheel antilock brakes and traction control, and its electronic stability system helps the driver manage the vehicle in various situations. The Onstar emergency notification system includes stolen-vehicle tracking and roadside assistance. The SLT rim gets standard front fog/driving lights that are available in the Work Truck and SLE.

Have you driven a 2012 GMC Canyon?
Rank This Car

Can I Really Not List My Vehicle For Sale On The Canadian Site?

I've checked the questions area and compared the US site with the Canada site and the "sell my car" option is not showing on the Canadian site. Does Cargurus really not allow private sellers to sell...

14 views with 5 answers (last answer about a year ago)

If The Emissions Warning Light Comes On & Then Goes Out After 2 Tankfuls Of...

Just after filling up at a name brand gas station on a recent trip to AR, the emissions warning light came on. We checked the gas cap; fine. The light remained on throughout that tankful & the next,...