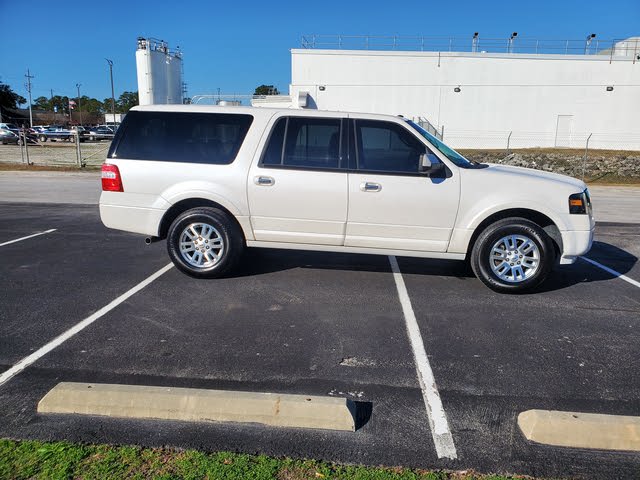 Some respectable handling and ride qualities, a competent drivetrain, an adult-size, easily manipulated third row and a ton of flexibility keep the 2012 Ford Expedition near the top of the sport ute heap.

The 2012 Expedition's V8 powerplant, though adequate, suffers against the competition, while an aging interior design, too many low-end cabin materials and some issues with entry and exit remain a few of this big ute’s glitches.

One of the original full-size SUVs, the 2012 Expedition has only limited appeal in today’s eco-friendly and politically correct climate. However, for those who absolutely need plenty of cargo, trailer-towing and people-hauling capability, this towering titan should be a pretty good fit. Its potent V8 drivetrain, though not quite as good a performer as those of most rivals, nonetheless comports itself admirably when necessary, and a boatload of standard features ought to keep folks comfy and entertained.

For those with a yen for the days of cheap gas, family outings and big sport utes, the 2012 Ford Expedition is back, bigger and badder than ever. This 8-passenger, 5-door, full-size SUV remains a decent choice where heavy-duty towing needs, loads of people-toting capability and state-of-the-art standard features are encountered on a fairly regular basis. Needless to say, the market for these behemoths is distinctly in decline, with full-size pickups and larger crossovers doing many of the same jobs more efficiently. This doesn’t mean, of course, that the days of the big ute are over… or even numbered; simply put, bigger isn’t necessarily better.

In any case, the 2012 Expedition lineup offers roomy accommodations, scads of cargo room and, best of all, a surprisingly compliant ride with better-than-average agility. From the base XL trim to the lower midlevel XLT to the upper midlevel Limited to the flagship King Ranch, this hulking Ford sport ute can do the big jobs well and still retains its boxy, kind-of-retro profile that’s become a staple on American roadways. Indeed, this handsome devil still draws neck-straining looks from more than a few frustrated station-wagon owners. And to top it all off, each trim offers an extended-length version, appropriately named the EL, which adds almost 15 inches to this titan’s standard overall length and 12 inches to its standard-length wheelbase. Of course, rear-wheel drive (RWD) is the standard drivetrain aboard all Expedition trims, but all remain eligible for Ford’s Control Trac 4-wheel-drive (4WD) system with driver-selectable settings.

All trims except the regular-length XL offer 3 rows of seating for 8, though second-row captain’s chairs, available lineup-wide, again, with the exception of the 5-passenger-only regular-length XL, reduce total seating capacity to 7.

Only a few minor tweaks differentiate this year's Expedition from the 2011 edition, with standard blind-spot mirrors added to all trims, optional heated second-row seats for the XLT and front parking sensors added as standard equipment to the Limited and King Ranch.

Granted, rivals like Chevy’s sizeable Suburban, along with its GMC Yukon cousin, offer a bit more in terms of power and performance, but neither offers the extended-length version of the Expedition EL trim levels. And even though Toyota’s Sequoia and Nissan’s Armada check in with a tad more refinement, neither Japanese offering boasts the overall toting capacity of Ford’s capable ute.

The 5.4-liter, E85-capable Flex Fuel (FFV) V8 powerplant and 6-speed automatic transmission remains the only drivetrain available to the 2012 Expedition lineup. This combo puts out 310 hp at 5,100 rpm and 365 lb-ft of torque at 3,600 rpm, which, despite variable valve timing (VVT), leads to mileage estimates of a tepid 14 mpg city/20 highway with the standard RWD and 13/18 with 4WD.

Towing maxes out at 9,200 pounds with the V8, but that’s with the heavy-duty tow hitch, wiring and trailer sway control that come standard in the Limited and King Ranch and is again optional for the XL and XLT. Additionally, all trims need the available non-limited-slip 3.73 rear axle to maximize hauling capabilities.

Reviewers are quick to note that the 2012 Expedition trails rivals in pure engine power and performance, not to mention fuel efficiency. Several reviewers wonder why Ford doesn’t offer something like the 352-hp 6.0-liter powerplant that comes with Chevy’s outsize Suburban 2500 trims, but concede the Expedition’s basic capabilities. The 6-speed automatic gets the job done, say most reviews, though a few note that manual gear selection might be necessary in hilly country when towing heavier loads. Tests of a RWD Expedition had it going from 0-60 in 8.9 seconds, not surprisingly just a tad slower than the class average.

Ride comfort in this hefty hauler is noted by virtually all reviewers to be surprisingly plush for a body-on-frame, full-size sport ute. Most reviewers claim both regular-length and EL versions handle even major road imperfections with little jarring, noting that the EL trims ride just a bit statelier over stretches of broken pavement.

Little body lean in corners and a solid feel to the wheel lead most reviewers to praise this big ute for its unusually competent handling abilities. Even the stretched EL editions are notably nimble, according to many reviews, with the major drawback in these roomy behemoths, of course, being their less than handy maneuverability in tight spaces.

Finally, brakes in the 2012 Expedition are described as decent but not great, with stopping distances from 60 mph averaging 152 feet, a bit longer than the distances of some rivals.

Though a mechanical twin of Lincoln’s posh Navigator, the more affordable 2012 Expedition is not up to the Navigator’s decadent standards, feature-wise. However, even the base Expedition XL (and its EL counterpart) comes with enough bells and whistles to hold its head high among its comparatively priced contemporaries.

Lower trims can be delivered with a number of features found standard in higher trims, while stuff like all-weather floor mats, remote engine start, rear-seat DVD entertainment and a 3.73 rear axle is available to all trims. Second-row captain’s chairs, meanwhile, also remain available lineup-wide, while all trims, except the XL and its EL counterpart, can additionally be delivered with available power-deployed side steps, hard-drive-based navigation, HD radio and/or a power moonroof. Many of the above options are available in either package form or as standalones.

Reviewers continue to be disappointed in this big ute’s low-rent cabin materials. The SYNC system still reveals a hitch or two, the navigation system still frustrates audiophiles, and the cabin still simply looks, well, drab and unappealing, according to many.

However, most reviews do praise the Expedition’s lordly passenger room, adult-friendly and easily accessible third-row seat and the power-folding third-row feature. Nevertheless, rear and side visibility remains hampered by thick roof pillars, while entry and exit continue to frustrate shorter folks despite standard side steps. Finally, the optional second-row captain’s chairs are panned in a number of reviews for being set just a bit too low.

Finally, most reviewers give this titanic sport ute high marks for cabin storage, citing its large glovebox and center console, not to mention extra-wide door pockets. Cargo room in regular-length trims is maxed out at 108.3 cubic feet, with EL trims boasting 130.8 cubic feet—all measurements, of course, were taken with the rear seats folded. Finally, reviewers note that all seats fold flat into the floor, allowing owners full access to and use of this cavernous area.

The XLT and higher trims sport standard rain-sensing wipers, SYNC alerts and turn-signal-integrated mirrors, with the SYNC alert system optional in the XL.

Apparently in deference to its already mentioned size, the Insurance Institute for Highway Safety (IIHS) has not tested the 2012 Expedition.

Too-short seats and those pesky low-end cabin materials are a couple of the more obvious owner complaints regarding Ford’s outsize Expedition. A few owners also have problems with a perceived lack of resonance from the premium audio system, while others find that the SYNC system still needs a few more tweaks. Finally, a number of owners complain that the rear tailgate latch is less than perfect, while others complain about the small-ish center-console storage capability.

On the plus side, owners laud this big ute’s roomy cabin and cargo area, unexpectedly comfy ride and surprisingly nimble handling. Owners also laud the Expedition’s potent-enough V8 and 6-speed automatic, as well as Ford’s competent Control Trac 4WD system. Lastly, most owners agree that this big hauler remains decently quiet inside, while its hefty bulk and tall stance allow virtually all owners to feel a lot safer on the highway.

What's your take on the 2012 Ford Expedition?

Have you driven a 2012 Ford Expedition?
Rank This Car

How Do I Delete My Listing When The Vehicle Sells?

I have a 2012 Ford Expedition Limited. We are needing to replace the Speed Sensor, but we can not place it! Does anyone know where the placement of the sensor is?

Why Isn't The Front Ac Working?

My ac isn't blowing at all in the front but the rear works fine. Could this be a fuse?

How do I find and open drain holes in rear doors? Is it really necessary to remove inside door panels, as the dealership is suggesting?