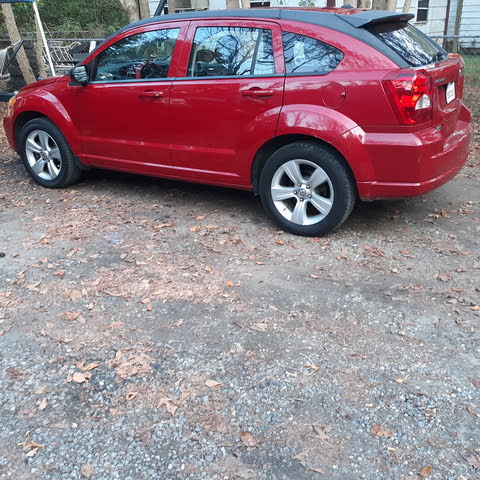 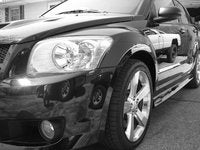 A practical and feature-rich cabin, standard cooled beverage compartment, generous if not cavernous cargo room, and a pleasingly efficient control layout are among the 2012 Dodge Caliber’s strong points.

Lazy acceleration, a noisy and inefficient continuously variable transmission, ponderous handling capabilities and some low-ball cabin materials and workmanship all conspire to keep the little 2012 Caliber hatchback low on the market totem pole.

In value and basic hauling needs, the 2012 Dodge Caliber lineup is surprisingly adept. In just about every other category, however, this underachieving compact hatchback just doesn’t cut it, especially in comparison to its closest rivals. Regardless of a certain owner affection (brand loyalty, perhaps?) for this scrunched-up family car, prospective buyers are advised to take a look at the Caliber’s competition before deciding on this decidedly lesser alternative.

Although there are those who stand by it, the prevailing opinion of reviewers is that the 2012 Dodge Caliber leaves much to be desired. This 5-passenger, 5-door compact hatchback is touted as a value-laden alternative to the small crossover, but power, performance and refinement all remain lacking, though cargo room, at 47.4 cubic feet total, is notably better than, for instance, a compact wagon's.

Meanwhile, the standard… and only… powerplant available to the Caliber lineup is an inline 4-cylinder (I4) engine that is long on mileage, but short on movement, while the continuously variable transmission (CVT) destroys gas mileage while emitting an unseemly whine that can drive occupants to distraction. Ride comfort and handling, meantime, are barely up to snuff, leading a vast majority of reviewers to concur that this little hatchback is practical and priced right, but substandard in just about every other way.

In any case, Chrysler has simplified its Caliber trim lineup, and now offers this mini-hatchback in 3 trims, the base SE, the sport-oriented SXT Plus and the more laid-back SXT. The latter two trims are equipped essentially the same, with the SXT Plus boasting a standard manual transmission and sport-tuned suspension, while the SXT offers the much-ballyhooed but distinctly imperfect CVT and a touring suspension that’s just slightly stiffer than that of the entry-level SE.

Besides the revamped trim lineup, only a slight (apparently very slight) reworking of the CVT, aimed at improving performance and its unconscionable drone, constitute the more noteworthy improvements to this year’s Caliber.

If anyone's looking for a compact hatchback, wagon or crossover, reviewers opine that some tires ought to be kicked on the Ford Focus, Mazda3 and Volkswagen’s Golf, if more refinement at a comparable size are desired. The Honda Fit, meantime, as well as Ford’s fancy Fiesta and Chevy’s Sonic, meantime, all offer more quality, functionality and overall quality than the Caliber.

Again only the under-achieving, variable-valve-timed (VVT) 2.0-liter inline 4-cylinder (I4) powerplant is offered in the 2012 Caliber. The base SE and midlevel SXT Plus each sport a 5-speed manual transmission, with the SXT toting the allegedly improved CVT as standard equipment. The CVT also can be levered into the SXT Plus as an option.

In any case, look for 158 hp at 6,400 rpm and 141 lb-ft of torque at 5,000 rpm from the four-banger, while towing capability in this little hauler remains pegged at 1,500 pounds with the proper equipment. No 4-wheel-drive option exists for Dodge’s mini-hatchback, thus rear-wheel-drive mileage is estimated at 24 mpg city/32 highway for those Calibers equipped with the 5-speed stick shift, and 23/27 with the CVT.

Reviewers have unleashed a near-universal outcry against the constant engine drone that accompanies the CVT, even taking into account its supposedly improved abilities. An overall lack of refinement additionally means that even with the stick-shift, this four-banger lacks both power and performance. Mileage, meantime, is tolerable with the 5-speed stick, according to the majority of reviews, but most are left scratching their collective heads at the drop in fuel economy with the allegedly more sophisticated CVT.

A 0-60 time for the four-banger wasn't available, but reviewers say this hatchback is more apt to amble than to gallop, even with the 5-speed manual transmission. Further, a number of reviews state that pick-up is even worse with the CVT.

With a 4-wheel independent suspension, MacPherson front struts, a multi-link rear end and stabilizer bars all around, one might think the 2012 Caliber lineup would be fairly comfortable, ride-wise, and a reasonably nimble performer on twisty roads. Alas, according to the majority of reviewers, such is not the case.

Dodge’s compact people-hauler is described as acceptably competent on the highway, albeit with some sway and wallow that can be distracting. Nearly all reviews claim, though, that it displays a harsher ride than necessary over all but the smoothest surfaces. Meantime, the sport-tuned suspension in the SXT Plus trim certainly doesn’t help improve ride comfort any. Finally, tire size, with the base SE mounting 15-inch steel wheels, the SXT Plus boasting 18-inch polished alloy wheels and the SXT rolling on 17-inch painted alloy wheels, all with all-season tires, makes little difference in smoothing out those rocky roads, according to most reviews.

Many reviewers further note that handling attributes in this little hauler are akin to those of a full-size SUV. A lazy feel to the steering wheel, huge turning radius and some frustrating body lean in even moderate corners leaves most reviewers cold, with virtually all reviews comparing this aspect of the Caliber’s performance most unfavorably to its competition.

Finally, at least one reviewer complained that this glorified wagon is plagued with unpleasantly over-aggressive brakes that, though powerful enough, leave much to be desired in terms of civilized stopping.

If there’s one thing that most reviewers agree on when discussing the 2012 Caliber lineup, it’s the fact that Dodge endows these little guys with an admirable grouping of standard creature comforts. The base SE, for example, sports a rear spoiler and heated power-adjustable mirrors outside, with premium cloth upholstery, remote power door locks and one-touch power windows adorning the cabin. Of course, Dodge/Chrysler’s highly touted cooled beverage storage bin is standard aboard this entry-level trim, as are floor mats and manually adjustable air conditioning. Finally, cruise control and tilt-wheel steering are delivered for a bit of added convenience, with entertainment presented by a 66-watt audio system boasting an MP3-capable single-CD player, 4 speakers and satellite radio.

Next up, the SXT Plus boasts a fold-flat passenger seat, a height-adjustable driver’s seat and reclining rear seats, as well as an auto-dimming rear-view mirror, removable cargo-area flashlight, sport-oriented gauges and switches, upgraded cloth upholstery and various chrome and body-color exterior upgrades.

Options for the base SE include 17-inch alloy wheels, while all trims can be equipped with upgraded Uconnect/Bluetooth infotainment boasting a 6.5-inch touchscreen display, 30GB hard drive and rear-seat DVD entertainment. Hard-drive-based navigation and a power sunroof, meantime, continue to be optional for the SXT and SXT Plus.

As mentioned, most reviewers find the 2012 Caliber to be admirably equipped, features-wise. However, many find this mini-hauler to suffer a lackluster, not to mention noisy, cabin, with interior materials and workmanship that are distinctly sub-par in comparison to virtually all rivals. Furthermore, there is nearly universal reviewer disappointment with the thick roof pillars that seriously compromise all-around visibility.

It should be noted here that there are a number of reviewers who speak highly of the Caliber’s strategically padded interior surfaces and of the well-wrought, if a bit over-loaded, hard plastic that adorns the otherwise bland cabin.

Finally, the available Boston Acoustics fold-down tailgate speakers come in for high praise from reviewers, as do the large, easy-to-read gauges, logically located controls and roomy front seats. Even the rear seats are described by most reviewers as at least comparable to those of competitors.

Admittedly a bit less well-endowed than most rivals in standard safety features, all 2012 Caliber trims sport electronic brakeforce distribution and emergency braking assist, with only the SXT and SXT Plus boasting 4-wheel antilock disc brakes (ABS). All trims do come with standard traction and stability control, front and rear head airbags and front head restraint whiplash protection. As mentioned, the SXT and SXT Plus are eligible for added safety features with the pair of Security Group packages, one of which also includes a remote antitheft alarm.

The National Highway Traffic Safety Administration (NHTSA) gives the Caliber its third-best 3 stars in overall safety and side impact protection. Front crash testing, however resulted in a second-best 4 stars, as did rollover protection.

The Insurance Institute for Highway Safety (IIHS) awarded its best score of Good to this little Dodge in frontal crash test scoring, with seat-belt geometry also gaining a rating of Good. In side-impact testing, as well as rear impact absorption, the Caliber suffers the Institute’s next-to-worst score of Marginal, while roof strength tests resulted in a second-best Acceptable score.

In general, the 2012 Caliber receives somewhat better reviews from customers than from the automotive media. This doesn’t mean, however, that this little hatchback eludes a share of owner criticism, with poor side and rear visibility taking the lion’s share of complaints. The CVT takes a few owner hits for its noisy inefficiency, while road and wind noise also come in for a share of owner frustration. Finally, many owners would like to see a bit more power from the I4, while front seats are panned by a few owners as less than accommodating.

On the plus side, value is the operative owner description of Dodge’s pint-size people mover. The standard cooled beverage compartment comes in for high owner praise, as does a certain handling alacrity, surprisingly generous cargo capabilities and fuel economy with the 5-speed stick shift. Lastly, the available Boston Acoustics audio system, especially with its handy fold-down tailgate speakers, comes in for a number of owner kudos.

GuruBQZLP I had a2008 With heated seats, I’ve been looking for a newer one, must have heated sears..

Users ranked 2012 Dodge Caliber against other cars which they drove/owned. Each ranking was based on 9 categories. Here is the summary of top rankings.

Have you driven a 2012 Dodge Caliber?
Rank This Car

I have a 2012 Dodge Caliber and I have recently noticed that I have no fm radio stations at all. I have checked the fuse panel under the hood but they are fine. What do I do?? Help please!!

Ok so here is the deal. I recently bought a 2012 Dodge caliber. I did my regular routine maintenance on it spark plugs an air filter. After I changed the air filter my check engine came on. I chec...

Abs, Traction And Brake Light On

After changing the wheel bearings in the front, my abs, traction and brake light are on. Tried to get it reset but it didn't work. Any idea what it could be?

Took my car to midas and they did a recharge on my ac. They sucked everything out and filled it back up. The compressor still didn't kick on. They said next step is to replace the compressor. Is th...