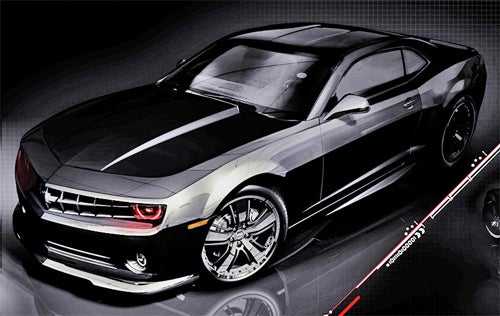 The Camaro ZL1, which takes its name from a limited production run of 69 high-performance Camaro ZL1s produced in 1969, joins the lineup for 2012, and the V6 powerplant in entry-level Camaros receives a bump of 11 hp, as Chevrolet's iconic muscle car strives to keep up with its equally aggressive competitors from Ford and Dodge.

Taller drivers will find limited headroom in the 2012 Camaro coupes, although convertibles offer more headroom, and the second-row seat remains cramped for adults of any size.

In the battle for supremacy in the muscle-car market segment, the iconic Camaro continues to hold its own against competitors like the Mustang and Challenger, and with the introduction of the 580-hp ZL1, Chevrolet hopes to dominate. Outside, the Camaro displays aggressive styling sure to get noticed, but many owners find the interior doesn't quite live up to expectations, due in part to hard plastic materials, limited headroom and limited visibility out both the back and front. Still, there's little doubt that the current Camaro is the best one ever produced by Chevy.

Celebrating its 45th year of production, the Chevrolet Camaro receives a wide range of upgrades for 2012, just in time for its 45th anniversary. Chevy boosts the Camaro's performance with an upgraded direct-injection V6 engine, tweaks the sport suspensions for SS trims, freshens the interior with a new instrument cluster and steering wheel, and adds a new rear spoiler. In addition, the automaker offers a 45th Anniversary Special Edition Camaro for 2012, and introduces the new high-powered Camaro ZL1, based on the original ZL1, which was equipped with an all-aluminum 427-cubic-inch engine that 69 lucky owners enjoyed back in 1969.

The current fifth-generation version of the Camaro, which roared back to life in March 2009 after having been dormant since 2002, continues to go toe-to-toe with such muscle-car competitors as the Ford Mustang and the Dodge Challenger. And like its competitors, it displays a contemporary exterior design while incorporating styling cues that draw on its heritage, such as the iconic Camaro grille, hood, taillights, sculpted rear shoulders and distinctive gills just forward of the rear wheel wells, as well as the interior dash and instrument gauges. More modern design elements include the steeply raked windshield, the low stance, and a longer wheelbase, which helps provide more interior space, particularly in the back seat.

The new ZL1, which Chevy says is the most powerful Camaro ever, boasts a supercharged and intercooled version of the 6.2-liter V8, which pumps out a whopping 580 hp and 556 lb-ft of torque. The ZL1 also features a high-performance suspension, reinforced driveshaft and rear axle, upgraded transmissions and brakes, and unique exterior details, including lower grille openings, a lower splitter, a carbon-fiber-composite hood air extractor and HID headlamps with LED halo rings. 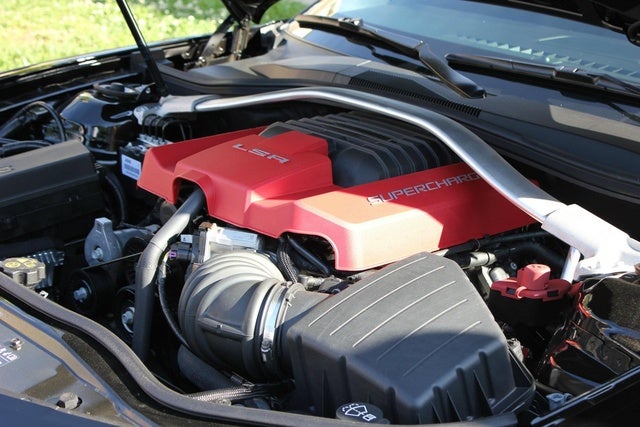 The rear-wheel-drive Camaro comes equipped with a choice of three engines. Powering the entry- and mid-level LS and LT trims, the updated 3.6-liter V6 engine weighs 20 pounds lighter than its predecessor, yet it delivers 323 hp, an increase of 11 hp over the previous year, thanks to such features as direct injection. Other engine enhancements include a new cylinder head design, an improved intake port, a new fuel pump and optimized-flow fuel injectors. Torque tops out at 278 lb-ft at 4,800 rpm. The V6 links to either a 6-speed manual transmission with a Hill Hold feature, which comes as standard equipment, or an optional 6-speed automatic transmission with GM's TapShift manual-shift feature (the automatic comes standard in the 2LS trim). The EPA estimates fuel economy numbers of 17/28 mpg with the manual transmission and 18/29 with the automatic.

At the top of the heap, the ZL1 delivers the ultimate pony car experience, thanks to its 580-hp, supercharged and intercooled V8. The engine drives the ZL1 from 0-60 in just 3.9 seconds, with a top speed of 184 mph when equipped with a 6-speed HydraMatic automatic transmission with a manual-shift mode. The sprint to 60 mph takes a 10th of a second longer with the Tremec 6-speed manual transmission with revised short-throw shifter, which comes as standard equipment. The ZL1's dual-mode exhaust system features vacuum-actuated valves in the exhaust pipes, which aid in performance while ensuring a throaty exhaust note.

Chevy's focus on extra horsepower for 2012 should be a welcome development for owners and reviewers, since many reported that the previous year's V6-powered Camaros felt underpowered at times, due in part to the car's weight. In addition, with Ford introducing a 444-hp Mustang Boss 302 for 2012, Chevy obviously felt the need to trump the original pony maker in the horsepower department, which it does with the ZL1.

The Camaro's ride and handling seem to keep improving with age, especially for the SS coupe trims, which get a revamped sport suspension for 2012. The new FE4 suspension package includes retuned front and rear dampers, reshaped and repositioned front and rear stabilizer bars, and 20-inch aluminum wheels. In addition, Chevy used suspension geometry borrowed from the ZL1. Both SS trims come equipped with 4-piston Brembo vented disc brakes and a limited-slip rear differential.

The standard package for the Camaro features a 4-wheel independent sport suspension, specially tuned to either the coupe or convertible body style, and variable-ratio power steering, as well as a balanced 52/48 front-to-rear weight ratio. The result, testers say, is a responsive, firmly planted feel, with excellent grip and minimal body lean in corners. In the competition between the Camaro, Mustang and Challenger, a number of testers give the Camaro the edge in the ride and handling department.

Proving it's in a category all its own, the ZL1 becomes the first sports car to receive the third-generation version of GM's Magnetic Ride Control suspension, which utilizes computer-controlled, magneto-rheological fluid-based actuators to vary firmness based on road and driving conditions. Drivers can choose from Sport, Tour and Track suspension modes. As a result, the ZL1 manages daily driving chores with ease while arriving fully track-ready. 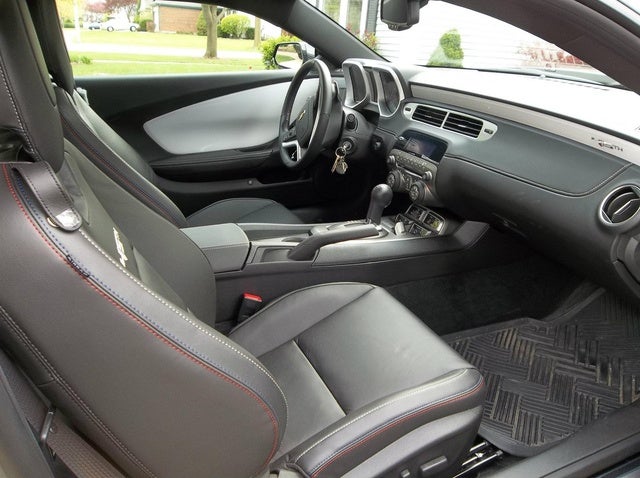 Although the Camaro's exterior design receives extensive praise from reviewers and owners, the same cannot be said about its interior. Headroom remains a problem for taller drivers, especially in the coupes, although the convertibles offer more headroom. The tight back seat, among the smallest in its class, also serves as a mark against the Camaro. Many owners report poor visibility out the rear, due in part to the small rear windows. In addition, the interior dash and side panels display too much hard plastic, and some owners note that the small gauges on the instrument panel, designed for a retro feel, can be hard to read at times. Their styling also conflicts with that of a more modern 4-gauge auxiliary instrument cluster available as an option, owners note. Although the front seats are comfortable, some testers find them too soft, and the seating position too low, requiring some seat adjustment for a good view of the road ahead.

On the plus side, the Camaro comes well-equipped with a solid list of standard features, including Bluetooth, remote keyless entry, a driver information center with a compass, steering-wheel-mounted audio and cruise controls, power windows and door locks, and a 6-speaker AM/FM audio system with SiriusXM satellite radio. In addition, OnStar with turn-by-turn navigation comes standard in all Camaros. Front sport bucket seats include 4-way manual adjustment for the driver's seat and 2-way adjustment for the passenger.

The LT1 and the 1SS trims add 6-way power-adjustable seats for the driver and passenger, a leather-wrapped steering wheel and shift knob, and Sport Cloth seats, while the LT2 and 2SS trims also include leather upholstery, a heads-up display, a 4-gauge auxiliary instrument cluster and a 9-speaker, 245-watt Boston Acoustics audio system with an upgraded satellite radio package. The ZL1 gets heated front seats, suede microfiber upholstery, a remote vehicle starter and a Rear Vision Package with a rear camera and 7-inch touchscreen, as well as leather upholstery and the Boston Acoustics audio system. Owners can add a sunroof as an option.

The NHTSA gave the Chevy Camaro a top safety rating of 5 out of 5 stars, since the sports car earned 5 stars for protecting passengers in frontal, side-impact and rollover crashes. The IIHS has not tested the Camaro.

In the battle between the Camaro, Mustang and Challenger for owners' hearts, looks and pedigree have a lot to do with the final buying decision. Owners who have opted for the Camaro say they like its exterior styling better than the entries from Ford and Dodge, but many also say the Camaro performs better than its competitors. In fact, some say it's the best-performing sports car available today. The Camaro accelerates quickly and provides a sport-oriented driving experience, yet it still manages to get good gas mileage, owners say. They also like the interior and find the seats supportive and comfortable.

A few owners have reported problems with their vehicles, but the biggest complaint concerns visibility, with some owners saying they have difficulty seeing out the front and rear. Overall, however, owners give the Camaro good marks.

What's your take on the 2012 Chevrolet Camaro?

Users ranked 2012 Chevrolet Camaro against other cars which they drove/owned. Each ranking was based on 9 categories. Here is the summary of top rankings.

Have you driven a 2012 Chevrolet Camaro?
Rank This Car

I Posted My Car For Sale With Cargurus, But I Don't See It.

How Do I Delete A Listing?

has anyone changed automatic transmission fluid yet? is it same as 2012? i wonder how do you fill the tranny!?!? strange to see no dipstick on the 2012 'maro.

when should i change my rear diff oil? i'm hearing i should change at 1k miles to get out all the shavings. true?