The BMW X5 Sports Activity Vehicle receives some minor updating for 2012, and continues to deliver a potent combination of sport-oriented performance, cargo-carrying functionality, high-end features and a classy exterior design.

Both the second- and optional third-row seats remain tight fits for adults in the 2012 X5, and fuel economy numbers for gas-powered trims lag way behind those of some competitive vehicles.

If you have the money and you're looking for a tightly engineered yet undeniably fun family hauler for weekday errands and weekend adventures, the BMW X5 fits the bill better than just about anything else in the class. Despite its height and weight, it performs and handles better than many sedans and offers plenty of cargo space, although some competitors do a better job of hauling larger families or lots of gear. Still, as an all-around upscale crossover vehicle, the X5 remains hard to beat.

Now deep into its second generation, the BMW X5 Sport Activity Vehicle receives a few minor updates for 2012. Outside, the X5 gets new LED corona light rings around the headlights, and roof rails are now standard on all trims. A cargo cover and USB port also become standard equipment, and BMW upgraded the X5's base sound system. In addition, mid- and upper-level trims get a number of new standard features, including heated front seats, power lumbar support, a power liftgate and navigation. The diesel-powered X5 trim also receives a number of new standard features, including Nevada leather upholstery, heated front seats and a power liftgate.

The X5 continues to receive praise from all corners of the automotive press for its winning blend of performance and upscale features. Add in standard full-time all-wheel drive (AWD) and decent cargo-carrying capacity, and the X5 pleases on just about all fronts. An available third-row seat turns any trim into a 7-passenger crossover vehicle, but the 2 occupants in the third row will have to be small children. The only other sticking point for many buyers remains the price, and add-ons can escalate that quickly. Still, you get a lot for your money, reviewers and owners say.

The X5's sporty nature begins outside, where it displays an aggressive yet well-balanced look, with a sculpted nose, signature dual-kidney grille, prominent wheel arches and rising side lines. The look suggests a combination of power and nimbleness, achieved in part by the X5's 50-50 front-rear weight distribution, according to the automaker. HID auto-leveling headlights, halogen foglights and chrome exhaust tips are among other exterior features.

For 2012, the X5 comes in gas-powered xDrive35i, xDrive35i Premium, xDrive35i Sport Activity and xDrive50i trim levels, as well as in a diesel-powered xDrive35d trim. A base 6-cylinder powerplant drives the 35i trims, while the 50i continues with a V8. Competitors for the X5 include the Mercedes-Benz M-Class, Lexus RX 350, Infiniti FX, Porsche Cayenne, Range Rover Sport and Acura MDX. The M-Class offers a few more standard features than the X5, reviewers note, and many of the competitors cost less than the X5, but they don't deliver the sporty performance of BMW's entry, which can run with the best in the class. 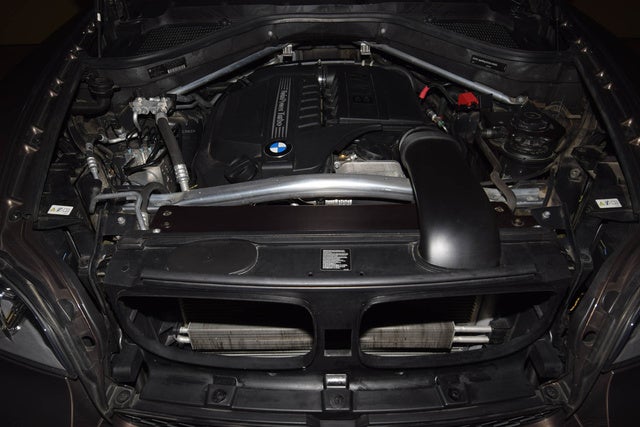 A trio of engines drives the various X5 trims. All three powerplants provide good power, testers note, and all three move the X5 quickly through its paces. The base engine, which powers the xDrive35i, xDrive35i Premium and xDrive35i Sport Activity trims, remains a turbocharged 3.0-liter inline 6-cylinder engine. It produces a respectable 300 hp and 300 lb-ft of torque, and pairs with a 8-speed shiftable automatic transmission, which comes standard. Fuel economy numbers check in at 16/23 mpg, thanks to such features as variable valve timing. Premium fuel is required. Towing capacity for 6-cylinder trims tops out at 6,000 pounds.

The top-of-the-line xDrive50i continues to receive a 4.4-liter twin-turbocharged V8, also with variable valve timing. It connects to the same 8-speed shiftable automatic, and pumps out an impressive 400 hp and 450 lb-ft of torque, though towing capacity still tops out at 6,000 pounds. Fuel economy numbers drop to 14/20.

Those looking for better fuel economy can opt for the xDrive35d, which comes equipped with a 3.0-liter, inline 6-cylinder dual-turbocharged diesel engine. Mated to a 6-speed shiftable automatic transmission, it develops 265 hp and a hefty 425 lb-ft of torque for a hard-charging ride off the mark. The diesel pushes fuel economy numbers up to 19/26 mpg, while towing capacity remains at 6,000 pounds.

The X5 rides on the 5-Series platform, which results in smooth, capable sedan-like handling for around-town driving. Turn the X5 loose on twisty roads, however, and its tight, performance-oriented characteristics quickly reveal themselves. Although the X5 sits rather tall, its long wheelbase provides stability, with minimal body lean in corners. The long wheelbase also helps even out the ride harshness, although testers do note that the X5's ride is more firm than comfortable. They also advise that the X5's AWD system is not designed for any kind of off-road experience. However, the combination of power, responsive handling and good road grip puts the X5 at the top of its class when it comes to performance.

The X5 comes equipped with a double-wishbone front suspension and a lightweight multilink configuration in the rear, while the xDrive35i Sport Activity gets a sport-tuned suspension. Engine-speed-sensitive steering results in responsive handling at higher speeds, although the steering can become heavy at lower speeds, such as in parking lots, according to some reviewers. Owners can add optional Active Steering, which varies the steering ratio based on the vehicle's speed. However, the system draws mixed reviews due to its inconsistency. The xDrive35i, xDrive35d and xDrive50i ride on 18-inch alloy wheels with run-flat all-season tires, while the xDrive35i Premium gets 19-inch wheels and the xDrive35i Sport Activity receives 20-inch wheels.

BMW continues to equip the X5 with all the expected upscale amenities and creature comforts, which help it stand out from the crowd. Seats are comfortable and supportive in the first row, though some testers find the second-row bench seat too low for adult comfort. The third row, they say, will accommodate only children and can be hard to access. Some reviewers consider the X5's interior layout a little traditional, but they all agree that passengers will find top-notch fit and finish throughout the cabin. All trims receive leather seats with power lumbar support and burl walnut interior trim except the entry-level xDrive35i, which gets leatherette upholstery. The front bucket seats feature 10-way power adjustment, and all trims get a leather-wrapped steering wheel with audio and cruise controls. Dual-zone climate control, keyless start and Bluetooth also come standard. In addition, all X5 trims receive an updated 10-speaker, 205-watt audio system with a USB port and HD radio, although satellite radio remains an option.

All trims also come equipped with BMW's updated iDrive turn-and-push vehicle control dial, which includes 6 programmable memory buttons. Mounted on the center console, the iDrive system enables drivers to manage the vehicle's climate control, audio, communications and optional navigation systems. Although the latest version improves on the previous one, some testers say it's still overly complicated to use.

BMW also upgrades a number of the X5's options packages for 2012. The Cold Weather Package, for instance, now includes heated rear seats, while owners can add leather upholstery and a third-row seat to the xDrive35i as standalone options.

The X5 offers 21.9 cubic feet of storage space behind the rear seats in 2-row trims. However, that number drops to a scanty 7.1 cubic feet when owners add the optional third-row seat. Owners can fold down both the second and third rows to expand cargo space up to 75.2 cubic feet.

Dual front, front side-mounted and front and rear head airbags come standard on the X5, along with such additional safety features as electronic stability control, traction control and 4-wheel antilock brakes with brake assist and electronic brakeforce distribution. A post-collision safety system and remote antitheft alarm also help passengers feel safer. In addition, BMW offers such optional safety features as a Lane Departure Warning System for all trims except the xDrive35i and the xDrive35d.

Owners are generally impressed with the 2012 X5, thanks to features like a new standard power liftgate on most trims and well-thought-out electronics, as well as its comfortable interior and sporty exterior design. They also give it high marks for its ride and handling at all speeds and on most types of paved surfaces. Some say they've noticed a slight turbo lag off the mark, but most agree that the X5's performance remains one of its best features. Most find its fuel economy numbers acceptable for a vehicle of this caliber. A few owners have noted minor quality control issues, and have reported breakdowns, but most say their X5s are reliable. Some owners comment on the X5's high cost, but most owners seemed pleased with what they got for their money.

TheHorror Do you mean anything that isn't a car, Evans? You must.

GuruWW72W One bad thing about the 2012 BMW X5 35i is that it starts leaking oil after just few years. On mine, the valve cover gasket started leaking just after 4 years, which is really bad for such an expensive car. When I took it to BMW I was told that this repair does not fall under warranty and I have to pay for it. Not happy about that.

Users ranked 2012 BMW X5 against other cars which they drove/owned. Each ranking was based on 9 categories. Here is the summary of top rankings.

I have a 2012 BMW X5 that continues to say "level control system malfunction" and the rear suspension is riding low on both sides. My fuses are intact and I can hear my car (what I think to be the c...

What are common causes of oil leaks in 2012 BMW X5 3.0 l..I just bought this vehicle and it 96 K miles and i was surprised to see the oil leaks on my driveway..

225 views with 2 answers (last answer about a year ago)

Why Are Only Two Photos Showing On My Listing

I replaced battery and alternator on 2012 x5 35 I drive and having same problem,battery not charging still what could be my problem

247 views with 2 answers (last answer about a year ago)

How Do I Do The Sale Through Car Guru ?

Jeffery wants to buy my car, How do we go about it, He's comming down from Flagstaff on Friday