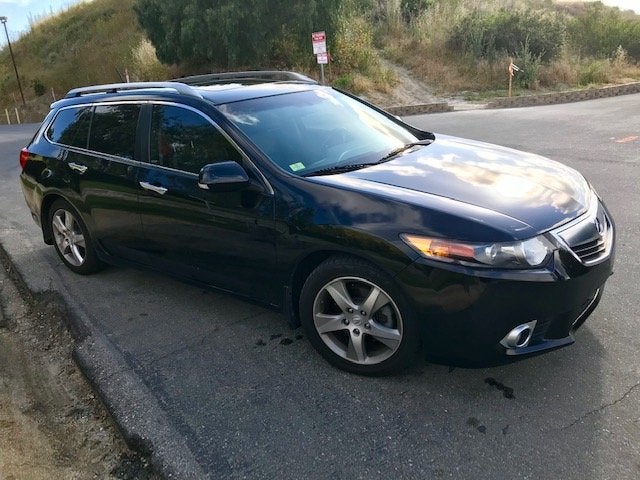 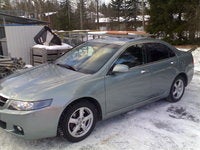 Acura introduces a uniquely equipped TSX Special Edition trim for 2012 and continues to offer the TSX in both Sport Sedan and Sport Wagon trims, with a choice of 4-cylinder or V6 powerplants, giving potential buyers a number of options when considering the automaker's family-oriented, entry-level luxury vehicle.

Reviewers find the 2012 TSX's base 4-cylinder engine adequate but unexciting, and the vehicle's second-row seat remains tight for adults.

The 2012 Acura TSX continues to appeal to buyers who are seeking an upscale daily commuter and family vehicle that's surprisingly comfortable and a good overall value. Although its compact size results in a tight rear seat, its overall build quality remains impressive. The vehicle performs and handles well, although a requirement for premium fuel continues to be a sticking point for some potential buyers. But gas mileage numbers of up to 31 mpg should ease some of those concerns. Current TSX owners who shopped around before buying remain convinced they made the right decision.

Acura celebrated its 25th anniversary in 2011, and to help commemorate the event, it announced the launch of a 2012 Special Edition for its entry-level TSX sports sedan. Thanks to a number of exterior and interior enhancements that distinguish it from the other TSX trims, the Special Edition displays a sportier, more aggressive appearance designed to appeal to younger buyers or those who seek a more performance-oriented appearance. Outside, upgrades include a more prominent front spoiler, a redesigned rear bumper, unique side sills and unique 17-inch aluminum wheels with a polished finish. Inside, the Special Edition comes equipped with perforated black Lux Suede upholstery with red stitching on the seats, steering wheel and shift knob, as well as red lighting for the instrument gauges, overhead lighting and footwell lighting. Aluminum pedal covers, black headliner material and bright silver plating on the steering-wheel-mounted paddle shifters are among the Special Edition's other unique features.

Other than the Special Edition trim, the TSX remains unchanged for 2012. Currently in the midst of its second generation, the 5-passenger TSX continues to come in Sport Sedan and Sport Wagon body styles. Base trims are powered by a 2.4-liter 4-cylinder engine, with an available 3.5-liter V6 for both body styles. In addition, owners can add an available Technology Package to the Base Sedan, V6 and Sport Wagon trims.

Outside, the TSX retains its contemporary styling, with the distinctive (and somewhat controversial) double-plenum front grille leading the way. A black mesh lower front air intake and integrated front foglights lend a sporty appearance, while creased lines sweep from the front fascia around to the pronounced wheel wells and back along the sides of the vehicle, creating a clean, unified look that some reviewers find a little dull. However, the exterior enhancements introduced with the Special Edition should help quiet those critics, at least temporarily.

Although some take issue with the TSX's exterior design, most agree that the entry-level Acura delivers a good balance of performance, style and functionality, especially for families who seek a more exciting ride than the typical family van or sedan. Competitors in the TSX's compact luxury car class include the Audi A3, the BMW 1 Series, the Volkswagen GTI and the Volvo C30, with the TSX routinely ranking near the top. In addition, the TSX continues to receive awards. For instance, U.S. News and World Report named the 2012 TSX the Best Upscale Small Car for Families. 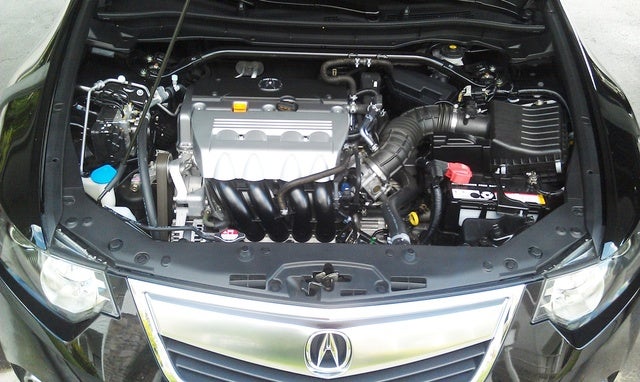 Base power for the front-wheel-drive TSX, including the Special Edition, continues to come from Acura's well-reviewed K24 2.4-liter 4-cylinder powerplant, which generates 201 hp and 172 lb-ft of torque at 4,300 rpm. When mated with a 5-speed Sequential SportShift automatic, which comes standard, the engine posts fuel economy numbers of 21/31 mpg. The automatic includes steering-wheel-mounted paddle shifters for fingertip manual shifting and an S mode, which reconfigures shift points for higher revving. In addition, a Cornering G Shift Control feature delays upshifts in tight corners to ensure smooth performance and stability. For a sportier driving experience, owners can add an available 6-speed manual transmission with a short-throw shifter, which drops fuel economy numbers slightly to 21/29 mpg.

Owners can also opt for an available 3.5-liter VTEC aluminum-alloy V6 engine, which pumps up the ponies to 280 and torque to 254 lb-ft. When linked to the 5-speed automatic, it posts fuel economy numbers of 19/28 mpg.

Although the V6 operates more smoothly and more quietly than the 4-cylinder, testers say both powerplants deliver good performance. The V6 offers a more aggressive driving experience, but owners who value fuel economy should stick with the smaller engine. Both engines can run up to 100,000 with no scheduled tune-ups. In addition, both are transversely mounted and require premium fuel.

The 2012 TSX continues to deliver a firm, confident ride, with good stability and minimal body roll in corners. However, due to its front-to-rear weight distribution, which favors the front end, the TSX tends to wander a bit in tight corners. Testers say the electric variable power-assisted rack-and-pinion steering feels light at low speeds but becomes tighter and more responsive as speed increases, providing good feedback for aggressive driving maneuvers. In addition, the 4-wheel antilock brakes provide good stopping power at all speeds.

The TSX's cabin deftly combines both upscale and functional elements, creating an interior that's sporty yet family-oriented. Passengers will find good overall build quality and plenty of soft-touch and leather surfaces inside the cabin, as well as all the latest tech gadgets. The instrument cluster features a 3-dimensional treatment designed to ensure easy readability, but it may take a little getting used to for new owners. Similarly, some testers say the climate-control system can be a little tricky to operate initially.

The front seats provide plenty of legroom and headroom, but due to the TSX's compact size, rear-seat legroom might be tight for taller occupants. The front dual-level heated seats are supportive and comfortable for long-distance travel, with 8-way power adjustment for the driver and 4-way power adjustment for the passenger. In the Sport Wagon, the rear seats split 60/40 and fold down to expand cargo space, which measures 31.5 cubic feet with the rear seatbacks up and 66.2 cubic feet with the seats folded down. The TSX sedan offers 14 cubic feet of cargo space in the trunk. In addition, passengers will find 13 different storage spaces throughout the TSX's cabin, including beverage holders, an enclosed change tray, a covered center console and deep seatback pockets.

Drivers can use the standard multi-information display to personalize some vehicle functions, and the leather-wrapped, 3-spoke steering wheel includes audio and cruise controls, as well as controls for the multi-information display and Bluetooth. Tech features include a 7-speaker, 360-watt audio system with a 6-CD changer, SiriusXM satellite radio, USB interface and MP3 input jack, as well as a subwoofer and a readout that displays audio information. Other standard features include dual-zone, dual-mode automatic climate control, a power moonroof, power windows and door locks, and a remote keyless entry system that also operates the moonroof and windows.

The Technology Package adds such features as a navigation system with a rear-view camera and voice recognition, and an Acura/ELS 10-speaker, 460-watt Surround Sound audio system with a 15GB hard drive and Dolby Pro Logic II sound. It also includes a GPS-linked, solar-sensing climate-control system, which makes adjustments to the cabin's interior based on sunlight and weather conditions, and a remote-control, power-operated rear tailgate in the Sport Wagon trims.

Both the TSX Sport Sedan and the Sport Wagon come equipped with 6 airbags, including dual front, front-side and side-curtain airbags for both rows of seats. The Vehicle Stability Assist system incorporates electronic stability control and traction control, and helps the vehicle remain firmly planted in tight corners and emergency situations. Other standard safety features include daytime running lights and antilock disc brakes with electronic brakeforce distribution and brake assist.

Owners are overwhelmingly positive about the TSX, in part because it offers a lot for the money. Many owners say they looked quite extensively at competitive vehicles, but felt the TSX offered the best overall package for the price and the best overall value. Owners also like the TSX's upscale amenities, comfortable cabin, solid performance and good gas mileage, as well as its tech features, including the available Technology Package. However, some owners say the Technology Package adds to the complicated nature of some of the car's controls. The Special Edition trim, some owners note, takes the TSX to another level.

Negatives include the premium fuel requirement, and some owners find the base 4-cylinder engine noisy at times, especially when pushed. But overall, owners say, the 2012 Acura TSX exceeds their expectations by providing a good blend of performance, comfort, functionality and value.

I brought my car in for its regular maintenance (always used dealership consistently). I was told that the a/c wiring has melted and requires $1300 worth of repairs & service. I am the original owne...

My Acura Radio Makes No Sound

2012 acura, battery died was jumped, didnt help. battery replaced. all other systems work, except radio. it turns on, but no sound. what gives?

After sitting in my garage for 4 days while we went on vacation in a different car, my 2012 TSX (61K miles) would not start. The first time I tried, the engine almost caught, but then died. I figured ...

What If Something Is Wrong With My Listing

In my Listing for my 2012 Acura TSX Wagon, in the listing it says there where 2 owners, I am the original owner , I purchased the car from Valencia Acura new in 2012, how do I change that informatio...

What Problem Will I Get Into Buying 2012 TSX ACURA? As It Will No Longer Be...

Will parts be harder to find? More expensive repair? In United States. Any feedback on the car itself is appreciated. Freshly interested in Acuras. Im flexible on the year too....