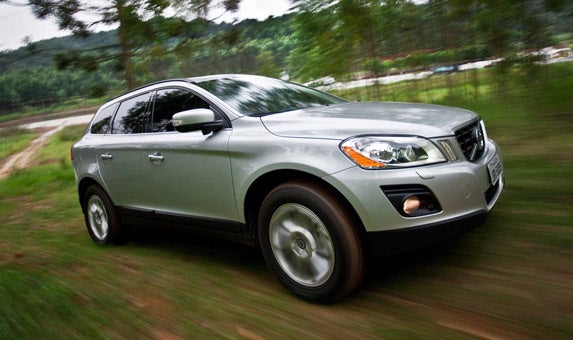 Yes, the 2011 Volvo XC60, like countless offerings from the Swedish carmaker before it, delivers numerous safety features, highlighted by an innovative and new City Safety system. But make no mistake, this is not your daddy’s boxy, old-school Volvo. The 2011 Volvo XC60 provides impressive performance and handling in a stylish and fun-to-drive crossover SUV that seats five.

How about that City Safety technology, though? Volvo says that 75 percent of all accidents occur at speeds of up to 18 miles per hour and that half of those happen in city traffic. The Volvo mission then is to improve on those numbers and minimize the effects of those collisions. The 2011 Volvo XC60 comes decked out with infrared laser sensors that determine whether you are approaching the car in front of you in traffic at too high a rate of speed. If so, the brakes get automatically applied. Ideally, that will be enough to avoid a crash, but it should at least mean a less-damaging bump.

Volvo added the XC60 to its American lineup in 2010, and its engine and trim lineup have been tweaked a bit for 2011. A 3.2, 3.2 R-Design, T6, and T6 R-Design are the four trim offerings, and horsepower has been bumped a little bit across the board.

Reviewers like the sleek style, inside and out, of the 2011 Volvo XC60 and appreciate the comfort of its ride. It handles well, they feel, and some rank it as overall the best of the Volvos. They favor the power of the turbocharged six-cylinder, but are not impressed by its gas mileage, and as much as they like the City Safety setup and other Volvo technology, they find the navigation system confusing and difficult to use.

As expected with a Volvo, safety features are abundant, starting with City Safety, which comes standard on the 2011 Volvo XC60. Dual front and front side airbags, curtain side airbags, antilock four-wheel disc brakes with brake assist, and an electronic stability system are among the standard safety items. A lane-departure warning system and high-speed collision warning system are available.

Users ranked 2011 Volvo XC60 against other cars which they drove/owned. Each ranking was based on 9 categories. Here is the summary of top rankings.

Expected Miles To Get From Your Volvo XC60

It has 100,000 miles. How many more could I reasonably expect to get out of this car. It does look like it is in good very condition.

My left door Mirrors have been moved out of position by an external force. How to must reset it electrically to the neutral position for electric retracting/extending to work correctly