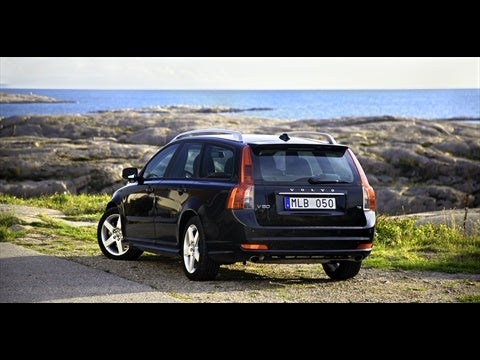 The 2011 Volvo V50 is a small wagon based on Volvo's S40 platform, so for the 2011 model year, its engine and transmission options have been streamlined, just like in the sedan model.

That can be a good thing, since the base engine is now a turbocharged five-cylinder engine that makes 227 horsepower and generates 236 pound-feet of torque at low rpms. The engine powers both the T5 and the T5 R-Design trims, mated to a five-speed automatic transmission that provides 30 mpg in highway driving and 21 in stop-and-go traffic.

Drivers who used to look to the V50 for an upmarket alternative to all-wheel-drive options available from European manufacturers won't have that option this year, since both the six-speed manual transmission and available all-wheel-drive have been discontinued. Instead, safety features include antilock brakes with electronic brake assist and a number of design features.

2011 Volvo V50s are notable for small touches in safety design, such as seats designed to minimize "submarining," or occupants slipping below the lap belts during a collision. That's combined with side-impact airbags for the driver and front occupant, a reinforced passenger compartment, and side-curtain airbags, in addition to head restraints for all occupants.

When it comes to performance, the base T5 trim comes with a softer chassis, so prospective buyers looking for a firmer ride may want to opt for the T5 R-Design, which has a more dynamic chassis setup. Both trims for the 2011 Volvo V50 do come with dynamic stability and traction control to minimize skidding in poor weather conditions.

For other features, the R-Design leads the way with a power moonroof, specialized partial leather upholstery, and leather-accented gearshift and steering wheel. T5 R-Designs also include sportier pedals and updated instrument gauges. Both trims come with 17-inch alloy wheels, although 18-inch wheels are an option for the R-Design. It also gets a roof spoiler and roof rails, along with an aero kit with front air dam and side skirts.

Both the T5 and the R-Design come with heated rearview mirrors, a trip computer, and a Bluetooth navigation system, as well as a standard HD radio system that can be controlled from the steering wheel and USB inputs. Cargo room for five occupants is good, although with the rear seats folded, it's among the best in class at 63 cubic feet.

Reviewers have said that the 2010 version is fairly sprightly in driving feel, although drivers may have to get used to a bit of turbo lag and handling that is more substantial than it is agile. Like the S40, the 2011 Volvo V50 is competing against the likes of the Audi A4 Avant and the BMW 3 Series wagons.

The V50 shines in terms of interior design, with its floating center console and the R-Design's two-tone seats setting it apart from other European sports wagons. Add in its safety features, and the 2011 Volvo V50 is a great option for prospective buyers looking for a good amount of cargo capacity in a design that handles like a car, not a crossover.

are there any smaller wago hatch back type volvos?