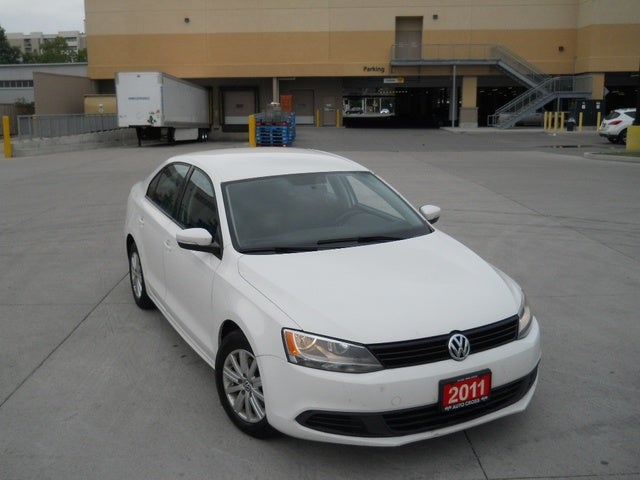 The redesigned 2011 Volkswagen Jetta tries to bring sexy back, with a modern, stylized exterior, increased rear legroom, and a lower price.

In an effort to take on its Japanese compact competitors price-wise, the 2011 Jetta's interior takes the biggest hit, with cheaper, less-plush materials, numb steering, and underwhelming fuel economy for its gas-powered engines.

With attention to interior details, quality materials, and performance found in higher-end autos, previous generations of the Volkswagen Jetta have carried a certain cache among the young, hip and upwardly mobile. Although the new price, sleeker exterior, and generous rear legroom of the redesigned Jetta for 2011 will continue to appeal (as will the fuel economy of the most expensive diesel TDI trim), cost-cutting efforts have downgraded many of the details that made Volkswagens special talismans for devoted followers. Though the 2011 redesign has maintained an auto with a good, solid ride, most agree that the Jetta is no longer exceptional, but simply good.

The Volkswagen Jetta sedan has been redesigned, both inside and out. Offering four trims for 2011—the base S, mid-range SE, high-end SEL, and diesel TDI—Volkswagen seeks to distinguish the Jetta as more than just a Golf in sedan’s clothing. The redesign clearly aimed to take on Jetta’s Japanese competitors (the Corolla and Civic) by lowering prices (the base S begins with an MSRP of $15,995) and modernizing its exterior style (generating comparisons to the look of an Audi). The car has been elongated—adding 3.5 inches overall and close to 3 inches to the rear-seat legroom—bringing the comfort level close to that of a midsize sedan. The interior, however, has suffered from cost-cutting efforts. The interior is less padded, silver trim is now painted plastic, and the dashboard plastic has a cheaper, shinier look and feel. Other VW features have disappeared altogether. The much-loved adjustable center armrest is now stationary, the power steering is hydraulic (rather than electric), the hood no longer stays open with gas struts, and the car now uses a torsion-beam rear suspension, rather than the four-wheel independent suspension of previous generations. The S and SE also trade disc brakes on all four wheels for rear drum brakes. These may not be deal-breakers to consumers new to the Volkswagen ride, but devotees may feel that this Jetta has lowered its price at too high a cost.

The base S trim of the 2011 Jetta resurrects an engine last seen when Whitney Houston’s “I Will Always Love You” ruled the airwaves (1993). The 2.0-liter, 8-valve, SOHC, four-cylinder engine produces 115 hp at 5,200 rpm and 125 lb-ft of torque at 4,000 rpm, with EPA fuel economy ratings of 24 mpg city/34 highway and a glacial 0-60 time of 9.8 seconds. A five-speed manual transmission is standard for the S (as well as the SE and SEL; the TDI has a standard six-speed manual). A six-speed automatic with Tiptronic and Sport mode is an available option for the S, SE, and SEL. The TDI offers an optional six-speed DSG automatic with Tiptronic and Sport modes.

While the fuel economy in the regular unleaded gasoline engines is somewhat underwhelming for compact cars, the 2011 Jetta’s TDI trim presents a whole different beast, with a 2.0-liter, 16-valve, inline four-cylinder turbodiesel engine. With the best fuel economy of the four trims (30 mpg city/42 highway), the diesel engine generates 140 hp at 4,000 rpm and 236 lb-ft of torque at 1,750 rpm and a Volkswagen-estimated 0-60 time of 8.7 seconds.

The Jetta's tires and ride vary by trim, with the S sporting 15-inch steel wheels, the SE offering 16-inch steel wheels (16-inch alloys for the SE with Convenience package and TDI), and 17-inch alloys for the SEL. The suspension for all trims has been changed from a four-wheel independent to a MacPherson independent front strut system with twist beam rear suspension for 2011. A sport suspension is available in the SEL’s Sport Package. The newly designed, telescopic steering wheel (leather-wrapped and multi-functional in the SEL, TDI and available SE Convenience packages) controls power-assisted rack-and-pinion steering.

Most road tests involve the high-end SEL trim (with one review theorizing Volkswagen desires to downplay the 17-year-old engine in the S trim). In general, experts feel the SEL is an adequate ride, however several note a momentary throttle lag after initial acceleration when starting from a complete stop. Engine noise on acceleration was observed by some, although most seem to agree that the interior suffers from little intrusive wind or engine noise. The ride is described as solid, with little body lean in the curves, and the Sport suspension seems to make little difference in test drives. Although the Jetta trades an independent suspension for the torsion beam rear suspension, the former does not seem to be missed, although small bumps are easily felt. The steering, however, seems to have declined, with words like “numb” and “uncommunicative” used to describe driving in a straight line, and “elastic” and “strangely artificial” used to describe corners. 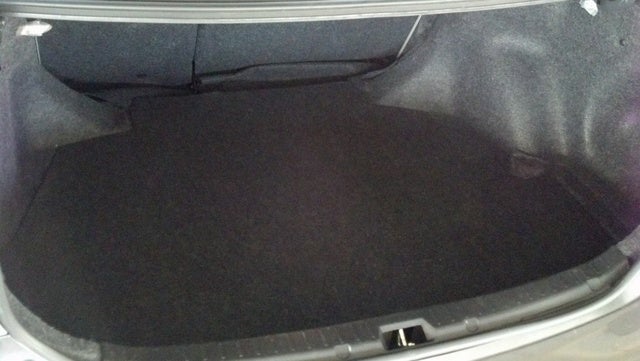 Although materials have been downgraded in this generation of the Jetta, there is still much to commend it, including a number of standard technology features at the higher trim levels. The base S offers standard manual air conditioning, power windows, power locks (with two radio-frequency remote transmitter key fobs), and heated side power mirrors. Seating for five is cloth-covered at this trim level, with manual six-way adjustment for the front. The overall lengthening of the Jetta’s body has benefited the rear seat in particular, giving it rear seating that comes close to the midsize sedan segment. The 60/40 split rear seat adds to the Jetta's segment-leading 15.5 cubic feet of space in the trunk (larger than the Accord or Passat), although the seats don’t fold flat. The S offers one stereo system: a 4-speaker system with MP3- and WMA-compatible in-dash CD player and AM/FM radio plus an auxiliary connection for portable audio players.

The SE adds a front center console with storage and a rear center armrest and pass-through from the trunk. No longer covered in cloth, the seats are now covered in V-Tex leatherette (read: leather-look) surfaces, which provide easy cleanup. Cruise control appears as a standard feature, and outside, the power heated side-view mirrors now integrate turn signals. The SE begins to add more customization possibilities, with two option packages. The SE with Convenience adds Bluetooth, heated front seats, and a leather-wrapped multi-function steering wheel; it also upgrades the stereo to a 6-speaker sound system with MDI and an iPod cable (oddly located in the glovebox) plus SIRIUS Satellite Radio with a 3-month trial subscription. The SE Convenience and Sunroof package adds a touchscreen Premium VIII sound system with an MP3- and WMA-compatible 6-CD changer in the dash, an SD memory card reader and a power tilt/slide sunroof.

The high-end SEL supplements the SE with Convenience package by adding an RNS 315 navigation system with a 5-inch touchscreen. While easy to use, the screen was too small for some, and the navigation package does not integrate external data (such as weather or traffic). One review noted that the system also fails to read out street names or show details to describe an upcoming turn. Additionally, it also fails to provide the ability to choose a location from the map. Keyless access now includes a push-button start feature. The driver’s seat includes lumbar adjustment. Outside, the SEL adds chrome grille and window trim, and integrates subtle halogen reflector lens foglights in the front bumper. Front and rear disc brakes replace the S and SE’s rear drum brakes. The SEL also offers an available sunroof or sport package (to add the sunroof plus a sport suspension, sport designed seats, sport pedals and door sills).

The diesel-run TDI trim begins with the features found in the SE with Convenience and Sunroof packages but has rear disc brakes (rather than drum) and a trip computer. The TDI can be further upgraded with a Navigation package, adding the touchscreen navigation system plus driver’s seat lumbar adjustment, foglights and chrome exterior trim.

Seating in the Jettas is generally described as comfortable and supportive. The Sport Package seating integrates bolsters to support the driver in the corners, but the seats are apparently wide enough not to be too constricting.

All four 2011 Jetta trim levels provide standard airbags (driver and front passenger, a front and side thorax airbag, side curtain protection airbags for both the front and rear). Additional safety features include Electronic Stability Control (to counter over- or under-steering), Anti-Slip Regulation, Electronic Differential Lock (to assist smooth starting on an unevenly textured surface, braking a wheel that begins to spin, redirecting power to a wheel with greater traction), and Engine Braking Assist. The S and SE have switched to front disc brakes with rear drum brakes, while the SEL and TDI provide standard disc brakes both front and rear. Additional braking safety features include antilock brakes and an electronic brakeforce distribution system (to prevent the rear wheels from locking during an emergency) and the Hydraulic Brake Assist system (which activates during emergency braking, boosting brake pressure while the pedal is depressed and reducing the pressure when the driver’s foot is lifted, shortening the vehicle’s stopping distance), as well as tire pressure monitoring. An Intelligent Crash Response system shuts off the fuel pump, activates the hazard lights, and automatically unlocks the doors when the airbags are deployed.

Reviews show that VW owners still love their cars, even with the experts’ reservations. Owners consistently compliment the power, handling, standard features, roominess (both in the back seat and the trunk), and good price. The new styling of the 2011 Jetta also earns praise. Some of the ergonomics generate reservations, however, such as the awkward position of the seat back adjustment lever and the low roofline that makes entering and exiting difficult.

What's your take on the 2011 Volkswagen Jetta?

TheHorror The Jetta grows large and cheap, like the typical North American consumer.

GuruP12XX My 2011 TDI has been disappointing in so many ways, with all of the electronic gremlins in the wheel sensors, expensive ABS braking module going bad, and the air conditioning needing replacement after 70k miles. I love the Diesel engine coupled with the 6 speed manual tranny, but hate the leaky, cheaply designed sunroof. The paint is apparently lower in quality, since it began delaminating after only 6 years. I keep cars for at least ten years, and up until now the VW Jetta has been a solid car, but the quality has definitely dropped of in the electronics, trim and ease of maintenance. My mechanic complains that NOTHING on this car is easy or inexpensive to maintain------compared to previous year models----case in point: the ABS brake module that costs about 3k to repair. Volkswagen has seemed to have lost it's way, as so many other automakers have----for expedient sales and profits, sacrificing the reliability and ease of maintenance. Probably my last VW----- this from a 20 plus year (loyal) VW customer. I may migrate to Toyota or Lexus------reliability, ease of maintenance and longevity are the qualities I seek.

Have you driven a 2011 Volkswagen Jetta?
Rank This Car

Does CarGurus Use Carfax

Hi my daughter's radio went out on her 2011 vw jetta last week. The radio will not come on and the screen is black. Her phone will still connect with the bluetooth. We have tried the hard restart with...

Have a code of p0442 and same code pending, they have been on for about a week, filled up on fuel and next morning car will not start. Any ideas? Possible bad purge valve?

He Check Engine Light Went O He Installed A Map Sensor. After Driving My J...

SE with Conv and Sunroof