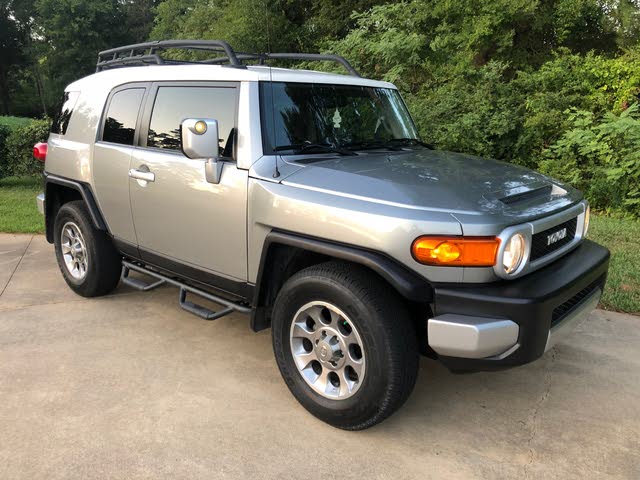 Average user score
4.5 ⁄ 5 stars
Based on 3 reviews
Great Overall Suv For The Active Person. by Advance — I use this vehicle for hunting, camping, etc. It has never let me down on a trail. It always got me home without incident. Fuel economy is not bad for a vehicle of this size and power. I get 21mpg... Read more
Best All Around Vehicle by firesky06 — No matter the occasion this truck has the advantage size, towing capacity, versatility, style, stability, and most importantly reliability. Everyone should get the chance to drive this vehicle. Gas mi... Read more

Rugged and versatile, a bear off-road, even tolerably compliant on-road - all of this describes the 2011 Toyota FJ Cruiser. This four-door, five-passenger, midsize SUV has the look of a brawler, and why shouldn’t it? It’s from the same people who manufacture the Land Cruiser, about as all-terrain-conquering an SUV as these things get. Available in a single trim that’s delivered with standard rear-wheel drive, this competent sport ute can be optioned with part-time or full-time four-wheel drive (4WD). With the standard automatic transmission and part-time 4WD, the Base morphs into the 4WD AT sub-trim, while full-time 4WD and the available manual transmission result in the 4WD MT sub-trim. Cargo space in all trims is a respectable 66.8 cubic feet, but though it’s called a four-door, the FJ Cruiser has only two full-size front doors, with two rear-opening “suicide doors,” euphemistically called “access doors” by Toyota, in the rear. Meanwhile, a few new and upgraded features are available for 2011, including a new audio system, marginally improved rear-seat access, and folding rear-seat headrests. Additionally, a new FJ Cruiser Trail Team Special Edition sub-trim with Army Green paint, beefed-up underpinnings and water-resistant seats and floors is scheduled to debut later in 2011.

Serious competition for the FJ Cruiser consists of the legendary Jeep Wrangler and Nissan’s family-friendly Xterra. The Wrangler is one of the most off-road-capable vehicles on the face of the planet, while the Xterra, with four full-size doors, eases the burden of entry and exit, as well as flaunting its own off-road flair. Reviewers, however, describe the FJ Cruiser as a serious backwoods brawler that demonstrates surprisingly comfortable on-road manners - better, indeed, than either of the others.

The standard (and only) powerplant for the 2011 FJ Cruiser is a 260-hp, 271-lb-ft/torque 4.0-liter V6 engine. When mated with the standard 5-speed automatic in the rear-wheel-drive Base, the V6, packing variable valve timing with intelligence (VVT-i), ensures 17/22 mpg, and in the 4WD AT, marginally less. A 6-speed manual transmission is available in the 4WD MT sub-trim that’ll get 15/20, and the six-banger is capable of towing 5,000 pounds with the optional trailer hitch and wiring installed. The part-time 4WD AT features manual hi-lo gear selection and auto-locking hubs, while the full-time 4WD MT boasts hi-lo gear selection and locking center and rear differentials.

Limited visibility, difficulty in accessing the rear seats, and some cramped quarters when the rear seats are reached are a few glitches owners find with the current edition of the FJ Cruiser. Also those pesky rear seats don’t fold all the way flat, causing a bit of owner frustration when proper cargo stowage is needed. Positive owner feedback, on the other hand, notes the toughness and versatility of this midsize ute, as well as its surprising on-road manners and decent acceleration, leading a number of owners to describe it as “fun to drive.” Off-road capabilities and its especially traction-savvy demeanor in snowy conditions also have owners praising this capable cruiser.

What's your take on the 2011 Toyota FJ Cruiser?

Users ranked 2011 Toyota FJ Cruiser against other cars which they drove/owned. Each ranking was based on 9 categories. Here is the summary of top rankings.

Have you driven a 2011 Toyota FJ Cruiser?
Rank This Car

I just bought a 2011 FJ Cruiser. I noticed that the rear clamshell door drops about an 1/8" to 1/4" when opening. When closing it line right back up. There does not seem to be any rubbing marks and th...