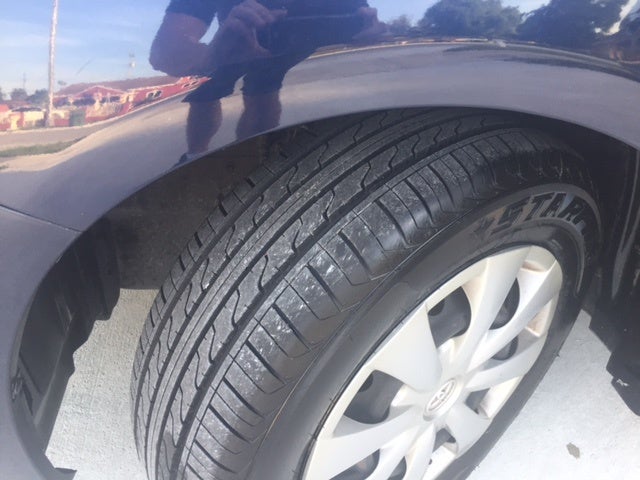 A comfortable ride, straightforward controls and instruments, impressive gas mileage, decent safety scores and a reasonably quiet cabin are all included in the 2011 Toyota Corolla.

Unfortunately, a less-than-exciting drive, over-feathery steering, limited trunk space, tepid cabin materials and workmanship, and a lack of even basic luxury conspire to keep the 2011 Corolla rather low in the pecking order.

For those who are into mediocrity (or shopping for their first car), Toyota has an automobile for you. Though not a bad automobile, the 2011 Corolla has little to recommend it over most of the competition. It will, however, get the small family from Point A to Point B economically, if not elegantly, and it does still have that re-invented Toyota reliability.

Who would have thought that the Toyota Corolla would own the title as the bestselling automobile, world-wide, of all time? Times have changed, however, and the 2011 version of this front-wheel-drive (FWD) five-passenger compact sedan, though certainly family friendly and inexpensive to own, is seriously outgunned in refinement, performance and even gas mileage by a number of upstarts, of which it has been a worthy forbear. Now in its 35th year in the U.S. and considerably lower in the pecking order, the 2011 Corolla has been slightly tweaked inside and out, including a new front fascia, grille and headlights, a new trunk lid and rear bumper, as well as new seat colors and patterns, complementing some marginal interior trim upgrades. Essentially, however, this is the same car as last year, with trim levels whittled to the Base, the midlevel LE, and the top-shelf S. The XLE and XRS trims have been relegated to history, at least for the time being.

Alas, cabin quality, never a strong point at this level, and over-friendly electronic power steering conspire with the tepid though reasonably efficient inline 4-cylinder (I4) powerplant to keep this little sedan at the low end of the market spectrum in handling and acceleration. Trunk space, at 12.3 cubic feet, is on the small side, though split-folding rear seats add a decent amount of extra room when needed. But this doesn’t mean it’s not a pretty fair first car, and its low starting price has folks thinking value from the highway to the driveway.

That said, nearly every review out there is adamant in describing today’s Corolla as an also-ran in almost every category. Honda’s Civic and especially its popular Fit beat Toyota’s compact sedan in interior ambiance, fit and finish, while Ford’s Fiesta tops it in performance and high-tech gizmos. As far as reliability goes, Toyota, after taking a serious hit over its malfunctioning gas pedals, seems to have regained its reputation in this regard, but other carmakers have also made huge strides in safety and reliability, resulting in the Corolla being considered adequate, at best, in overall trustworthiness. 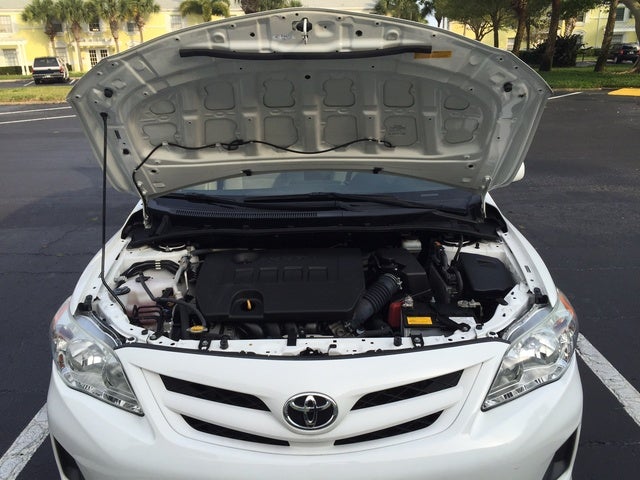 A single powerplant, the 132-hp (at 6,000 rpm) 1.8-liter I4, equips all 2011 Corolla trims. The Base trim comes with a standard 5-speed manual transmission, while a 4-speed shiftable automatic transmission is standard in the LE and S trims and optional for the Base. The 5-speed stick is also optional in the sport-oriented S trim. Either transmission is good for 128 lb-ft of torque at 4,400 rpm and, if one is so inclined, a towing capacity of 1,500 pounds with the proper equipment. EPA estimates, meantime, put fuel efficiency at 28/35 mpg with the stick shift and 26/34 with the shiftable automatic.

One road test has the automatic-equipped 2011 Corolla doing 0-60 in just over 10 seconds, which isn’t exactly world-class, even for this level. Most reviewers do say, however, that this little sedan is able to hold its own on the highway, though a bit of foresight and a heavy foot will be needed for passing and merging. The 5-speed manual transmission is noted by the majority of reviews as smooth and dependable, but the automatic has been described by a few reviewers as a bit hesitant from a stop on occasion. Several reviewers bemoan the noise that’s common to the four-banger on heavy acceleration, with some complaining that the racket never disappears entirely, even at highway speeds. Mileage, though acceptable, could, according to numerous reviewers, be improved significantly to match the competition.

Ride comfort aboard the 2011 Corolla is described by most reviewers as tolerable if not plush. A front independent suspension with MacPherson front struts complements a front and rear stabilizer bar and torsion-beam rear suspension, with the Base and LE trims sporting 15-inch steel wheels and the S trim level boasting 16-inch alloy wheels. Bumps and imperfections are well absorbed, with little evidence of float or wallow over highway imperfections.

The Corolla’s electronic power steering allows for little in the way of handling prowess, and steering feel and response, though fine in slow-speed maneuvers, degrades markedly on the highway, according to most reviews. Braking, meanwhile, is described as effective enough, but pedal modulation is noted by a number of reviewers to be somewhat artificial and definitely sub-par.

Reviewers are of the opinion that this compact sedan is a fine commuter car, and its tight turning radius makes it a breeze to maneuver in traffic and crowded parking lots. Unimpressive handling, however, leads to a boring drive in the country or on a long vacation trek. Interestingly, a TRD (Toyota Research Department) rear sway bar and/or front strut brace is optional for all trims.

Though not as well-equipped as some small sedans, the 2011 Corolla comes with at least most of the basic cabin comforts, even in its Base configuration. Such trappings as standard cloth upholstery, front bucket seats, power outside mirrors, and telescoping tilt-wheel steering complement front and overhead consoles, air conditioning, and a trip computer in the Base trim. Entertainment, meantime, is provided by an MP3-compatible single-CD player and four speakers.

The LE trim adds remote power door locks and power windows to the mix, as well as a simulated alloy steering wheel with mounted audio and cruise controls. Phone pre-wiring and two additional speakers also are delivered with the midlevel trim.

Options across the lineup include the Preferred Access Package with front and rear floormats, rear bumper protector, cargo net and trunk mat, as well as such standalones as Toyota’s BLU Logic hands-free system for hands-free audio and phone use, an auto-dimming rear-view mirror and upgraded wheels. The LE and S trims are additionally eligible for available remote engine start, a power moonroof, 18-inch five-spoke wheels in black or silver, and the Premium Package, which includes XM satellite radio, USB/iPod interface and Bluetooth wireless audio streaming.

Reviewers are generally pleased with the 2011 Corolla’s simple gauge and instrument clusters, with a few finding them a welcome relief from the over-busy 747-cockpit look of many in the class. The latest refresh of its cabin leaves this simplicity while providing a marginal improvement in seat comfort and interior materials. Though there remains an inordinate amount of hard, hollow plastic aboard this compact sedan, a few reviews claim that some nice texturing tames the low-rent look, at least on first glance. A navigation system, once offered as an option, is no longer available in the Corolla, with a few reviewers guessing that it won’t be missed. Seat comfort is not high on the list of reviewer hallelujahs, but seems okay for the commute or the trip to the mall. Outward visibility, meanwhile, is described by most reviewers as just fine.

Virtually all reviewers agree that the 2011 Corolla is a very safe compact sedan. Standard safety equipment includes a four-wheel antilock braking system (ABS), electronic brakeforce distribution, emergency braking assist and a front disc/rear drum configuration. There’s also traction control and, as of this year, standard stability control in all three trims. Rounding out the standard safety equipment are dual front side-mounted airbags, front and rear head airbags, front head-restraint whiplash protection and daytime running lights. Additionally, the S trim level is equipped with standard front fog/driving lights that are available in the LE as part of the Premium Package. Finally, a remote antitheft alarm is optional across the lineup.

The National Highway Traffic Safety Administration (NHTSA) gives the 2010 Corolla four out of a possible five stars for front driver and passenger impact protection. Four stars are given, as well, for side impact protection on the passenger side, and four stars again for rollover protection, while impact protection on the driver’s side is given five stars. The Insurance Institute for Highway Safety (IIHS), meanwhile, gives the 2011 Corolla a “Top Safety Pick” award in scoring the Institute’s best ratings of “good” in front-offset, side impact, and roof strength testing.

Owners of the 2011 Corolla complain that interior quality still isn’t up to par, despite the admittedly minimal updates. Tepid acceleration out of the I4 as well as lackluster handling capabilities also disappoint more than a few owners. Combined with tiny trunk space, an unexciting exterior design, and some poorly placed instruments, the overall effect for several owners or prospective owners is that this compact sedan is boring to both drive and look at.

There are those owners, however, who claim that the 2011 Corolla does all that they ask of it and more. Reliability, fuel efficiency and low maintenance costs complement a quiet and decently roomy cabin, comfortable ride and low base price, leading many owners to praise this little sedan as a perfect first car.

What's your take on the 2011 Toyota Corolla?

Jason It is what it is. Most people don’t purchase a Corolla for sportiness or tons of bells and whistles. It’s not the most comfortable or fun to drive car, but even after 7 years and 60,000 miles, it has never let me down.

Users ranked 2011 Toyota Corolla against other cars which they drove/owned. Each ranking was based on 9 categories. Here is the summary of top rankings.

Have you driven a 2011 Toyota Corolla?
Rank This Car

A/c Recharged Does Computer Have To Be Reset

A/c not working. Mechanic drained, refilled, recharged, etc. He can get it to work when attached to his computer but will not on its own. His suggestion is the car computer needs rest - does this m...

2 views with no answers yet
90

I have a 2011 toyota corolla Le. One day I was driving and the Cruise control stopped working. When Ever I push the button it use to have a light on the dash come on. I dont get anything anymore. I ...

in Nov of 2017 I took this vehicle to dealer to resolve Airbag Recall issue. They also did a multi-point inspection for other issues. When I returned to pick up the car, I was advised that engine ...

On Tuesday, my battery light came on solid. Then while driving, I lost power steering. Took it to o’rileys and got battery replaced because it was low. Car was back to normal but light remained on....

Crossed jumper cables. Car will start and idle. Gas pedal does nothing