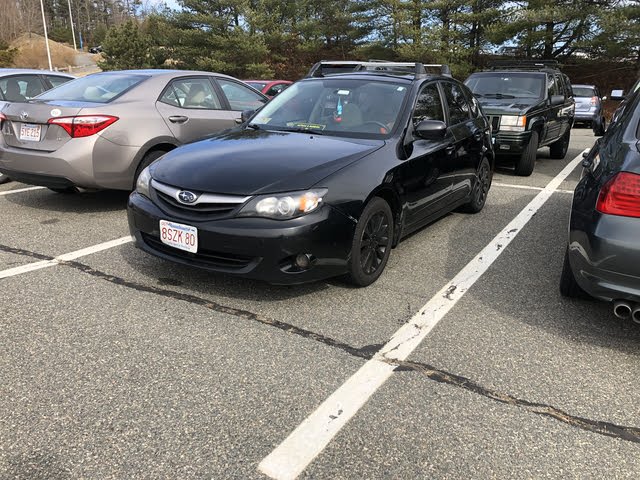 So-so fuel economy and some inefficient packaging are the downside of the 2011 Impreza's all-wheel-drive, boxer engine layout.

Combining small-car sensibility with tenacious traction, the 2011 Subaru Impreza merits a close look from anyone considering a more mainstream Honda or Toyota. Enthusiast drivers will thrill to the turbocharged WRX trims' aggressive exhaust note and 265-hp engine. Though a bit more expensive to buy and operate than its competition, the 2011 Impreza remains a unique and appealing choice.

Subaru's plucky Impreza is mostly unchanged for 2011. Offered as either a four-door sedan or a five-door hatchback, the Impreza is rather conventionally styled compared to Subarus of yore. A smoothly integrated front fascia flows nicely into a sharply raked windshield, and the side panels feature a creased character line that runs the length of the car. While inoffensive and handsome, the regular Impreza just doesn't have enough styling flair to set it apart from the pack. The sporty WRX model, however, gets enough flares, scoops, and spoilers to look like it means business.

Myriad trim levels are available for the 2011 Impreza. The base trim, dubbed the Impreza 2.5i, is competitively priced to do battle with the market leaders from Honda and Toyota. The Impreza 2.5i gets such standard niceties as power windows and locks, a single-CD stereo, and six airbags. Stepping up to the 2.5i Premium trim nets buyers 16-inch alloy wheels, an upgraded stereo with 6-CD changer, and a leather-wrapped steering wheel. The outdoor-themed Impreza Outback Sport raises the suspension for better ground clearance and also adds 17-inch wheels and a roof rack. Finally, the top-dog Impreza WRX gets a powerful turbo motor plus a new-for-2011 body kit with flared fenders and a more aggressive front bumper.

While traction and performance are abundant in the 2011 Impreza, everyday functionality lags behind the mass-market Corolla and Civic. The AWD system adds weight and complexity while cutting into interior volume. Fuel economy, especially with the tepid automatic transmission, is unremarkable, and the WRX's desirability among boy-racers and thieves makes for high insurance rates. 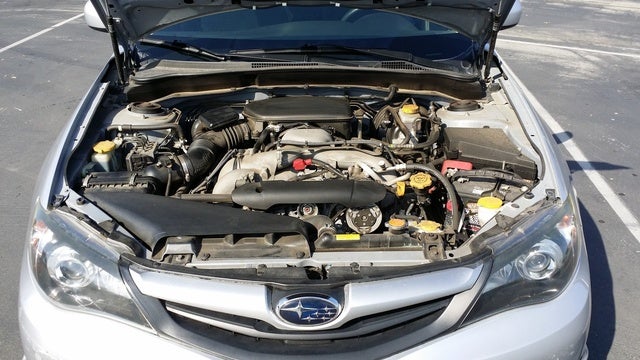 The 2011 Impreza 2.5i, 2.5i Premium, and Outback Sport all feature the same naturally aspirated 2.5-liter four-cylinder engine. In keeping with Subaru tradition, this motor features an unusual horizontally opposed boxer arrangement that keeps the center of gravity low. With 170 hp and 170 lb-ft of torque, the base motor provides plenty of oomph, provided you select the right transmission. The standard five-speed manual gearbox offers sprightly acceleration and smooth, progressive engagement. Unfortunately, buyers who can't drive stick will be forced to accept a four-speed automatic transmission that is missing a gear or two compared to the competition and saps power significantly.

Those looking for maximum performance from their Impreza will want to step up to the one of the WRX trims. For 2011 this turbocharged demon serves up 265 hp and 244 lb-ft of torque. Acceleration is breathtaking, provided the highly strung turbo motor is kept on the boil. The only transmission offered in the Impreza WRX is the slick five-speed manual, but unfortunately with so much power on tap, this gearbox also suffers from a lack of ratios.

All-wheel drive is a Subaru hallmark, and all 2011 Imprezas are equipped with the company's excellent Symmetrical AWD system. Manual-transmission models use a viscous center differential that sends power simultaneously to all four wheels, increasing the front/rear torque split when slippage is detected. Imprezas equipped with the four-speed automatic rely on a slightly different system that utilizes a computer-controlled clutch to deliver power to the wheels that have the most traction. With either system the Impreza offers impressive grip on slippery surfaces.

With a standard four-wheel independent suspension plus the road-gripping traction of AWD, it's no surprise that the 2011 Impreza attacks the pavement with confidence. The front strut-type and rear double-wishbone suspension endows all Impreza trims with buttoned-down handling. The low center of gravity and extra traction mean that even a base 2.5i corners with far more enthusiasm than an average economy car. Outback Sport trims get a jacked-up ride height to deal with the occasional foray off-road, though serious rock-hopping is a no-no.

Impreza 2.5i trims ride on 16-inch steel wheels shod with 205/55 all-season tires. Aluminum wheels, also 16 inches in diameter, are standard on the 2.5i Premium, while the Outback Sport gets stylish 17-inch alloys. The WRX benefits from both wider 17-inch wheels and larger vented disc brakes. The sporty WRX also gets stiffer shocks and large anti-roll bars at both ends to tamp down body roll.

The 2011 Impreza's interior features plenty of sensible design and is pleasantly rendered in high-quality materials. Ergonomics are straightforward, and the clearly marked ancillary controls are a breath of fresh air. The seats are quite comfortable and firmly bolstered, especially in the performance-oriented WRX, though its low-down driving position takes some getting used to.

While the Impreza's cabin isn't as spacious as the competition's, its large cargo area partially makes up for the deficit. The hatchback model is an especially adept gear hauler and popular as a ski car. Fold-down rear seats and a full complement of cupholders enhance the Impreza's utility factor.

A high level of standard equipment means even Impreza 2.5i owners won't feel as if they're driving a stripped-down penalty box. Power accessories, cruise control, and keyless entry are all included. Options include satellite radio and a cargo area organizer. The 2.5i Premium trim adds a leather-wrapped steering wheel and Bluetooth phone connectivity. The Outback Sport gets foglights, heated seats, and unique upholstery, while the Impreza WRX gains special bucket seats, a trip computer, and electroluminescent gauges.

Standard safety equipment in the 2011 Impreza includes front, side, and curtain airbags, along with advanced seat belts with pre-tensioners and force limiters. All Imprezas feature four-wheel disc brakes with ABS plus standard stability and traction control. In government crash testing both the Impreza sedan and hatchback earned five stars for the driver and passenger in frontal impacts. In a simulated side impact, the Impreza received a five-star rating for the front seats and a four-star rating for the rear.

Owners of the 2011 Subaru Impreza praise their car's stellar traction in snowy conditions. The WRX's exceptional responsiveness and buttoned-down handling amaze drivers. The Impreza's mediocre fuel economy draws some criticism, as do its higher-than-normal levels of tire and wind noise. While the Subaru's styling isn't universally loved, the Impreza's build quality is judged to be excellent.

What's your take on the 2011 Subaru Impreza?

Have you driven a 2011 Subaru Impreza?
Rank This Car

We just bought a 2011 Subaru Impreza from Jordan- we got it home and went to have it inspected- it now needs a few thousand dollars worth or work just to pass inspection!! I can no longer get in t...

Lost the only set of keys to our 2011 Impreza. Locksmith came out opened the car and cut and programed two new keys. Security alarm will not reset. Tried the three turn in the ignition but no j...

EZEProduction asked a 2011 Subaru Impreza 2.5i Touring Wagon Maintenance & Repair question about a year ago

Is My Transmission Savable?

My tranny grinds more and more going into 5th.tranny has about 80k km on ii Bought it used and double clutching doesn't seem now much. Im thinking the tranny oil is original. Wondering if a oil chan...

36 views with 4 answers (last answer about a year ago)