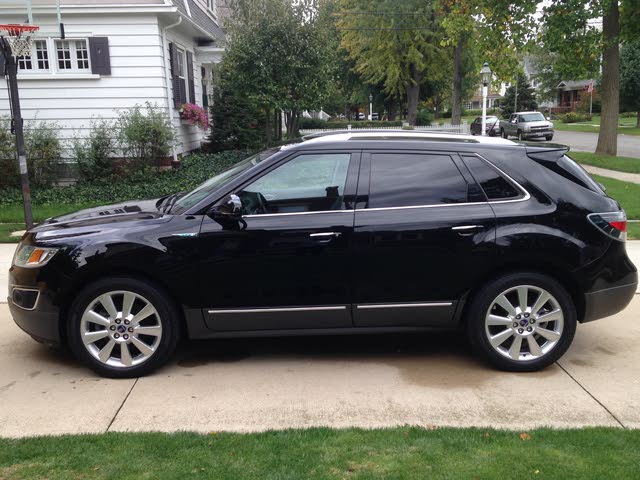 Looking for a Used 9-4X in your area?

Despite clambering from beneath GM’s mantle, Saab has decided to go ahead and introduce its Cadillac-SRX-derived 2011 9-4X. This foray into the fiendishly competitive luxury crossover market, beginning in May, could be risky, since the 9-4X was conceived and developed when GM held sway in the Saab boardroom. In any case, the Swedish automaker (now owned by the Dutch-based Spyker) has traditionally been a world leader in aerospace technology and design, thus their 2011 9-4X midsize luxury crossover ute reflects this heritage with swooping and gentle angling and even a cockpit-like wraparound front windshield. Inside, dashboard, center stack and shifter console are driver-oriented, reminiscent of modern jet fighter aircraft, and there remains, of course, the traditional between-seat ignition switch. All this is mitigated a bit with lots of leather and faux-wood surfaces, leading more than a few reviewers to speculate that Saab finally gets it in using high-end cabin materials for its luxury-tagged vehicles. Cargo area, meantime, is a middling 61.2 cubic feet with the rear seats folded, though the seatbacks are described by a number of early reviews as folding completely flat, not always the case in many of the pricier crossovers. There’s also an added bonus of a roomy storage area in the floor beneath the cargo bay, with the available U-rail organizer making quick work of stowage.

The brand-new 9-4X is offered in three trim levels, the base 3.0i, midlevel 3.0i Premium, and the performance-endowed Aero. The two 3.0i trims feature front-wheel drive (FWD) standard, though each can be delivered with available XWD, Saab’s version of all-wheel drive (AWD). Saab’s Haldex-sourced XWD system, by the way, monitors and adjusts torque between the front and rear axles, as necessary, while a standard rear limited-slip differential bounces up to 50% extra torque between the two rear wheels, again, as necessary.

The Aero XWD is, obviously, offered only with XWD and also sports a turbocharged V6, as well as the highly touted DriveSense adaptable suspension, in which driving conditions and habits are compensated for by the suspension system. DriveSense technology, similar in concept to the SRX’s Sport Suspension System, boasts driver-selectable modes, whereby a comfortable but bland ride can be achieved with the Comfort setting, or a bit of pizzazz can be injected with the Sport mode. In either scenario, handling is expected to be a high point for this high-end ute. Furthermore, though the 2011 9-4X is hustled by Saab as a midsize luxury crossover, its base price of just over $32,000, not to mention its pint-size dimensions, qualify it, in the minds of a number of media moguls, as a luxury-oriented compact.

Despite the Swedish/Dutch hopes for this GM-originated crossover, it will have to overcome the likes of Volvo’s XC60, BMW’s X3 and the formidable Mercedes-Benz GLK-Class. All of these are established luxury utes with intimidating pedigrees. Pricing and brand loyalty may be determining factors in how well the new kid on the block fares.

In homage to its GM roots, the 2011 9-4X is offered with two engine options, depending on the trim chosen. Standard in the 3.0i and 3.0i Premium trims is a 3.0-liter V6 powerplant that mates with a 6-speed shiftable automatic for 265 hp and 223 lb-ft of torque. Towing capacity with the available trailer hitch is 3,500 pounds, and mileage is expected to be similar to the figures for the 2011 SRX, 18/25 mpg in FWD trims and 17/23 in XWD versions. The 9-4X Aero XWD, meanwhile, is delivered with a potent 300-hp turbocharged 2.8-liter V6. This manly mill again combines with the 6-speed shiftable automatic for some 295 lb-ft of torque, once more good enough to tow 3,500 pounds of trailer with the available hitch installed.

In keeping with its luxury tag, the 2011 9-4X trims load up on the standard appearance, convenience and comfort goodies. The base 3.0i is delivered with standard 18-inch six-spoke alloy wheels and a rear spoiler on the outside, while inside occupants will behold perforated leather-appointed upholstery and a power-adjustable driver’s seat with memory. Also standard for the base trim are power windows and power-adjustable heated outside mirrors, remote power door locks, keyless entry, push-button start, cruise control, dual-zone climate control, a two-tiered cooled glovebox, alloy pedals, a leather-wrapped steering wheel and shift knob and simulated wood cabin accents. Entertainment is provided by a single-CD player, 150 watts of power, and seven speakers. To this, the 3.0i Premium trim adds a power-adjustable front passenger seat, heated and ventilated front seats, power-adjustable pedals, a universal remote garage door opener, auto-dimming rear-view mirror and remote engine start. Added audio and techno-features include ten Bose speakers, satellite radio, 5.1 surround sound, OnStar telecommunications, and Bluetooth technology.

Cabin-wise, the Aero XWD trim reflects its 3.0i Premium sibling, but outside, it throws a few more doodads on the pile, including 20-inch nine-spoke alloy wheels, a power liftgate, and front mesh grille inserts.

Options for the 3.0i include a number of standard items found on the higher trims, as well as a rear-view camera, trailer hitch and wiring, and a power tilt-and-slide moonroof. Options for the 3.0i Premium and Aero XWD include front and rear parking sensors, tri-zone climate control, rear-seat DVD entertainment and rear heated seats. The 2011 9-4X’s higher trims are also eligible for a touchscreen hard-drive-based navigation system, USB connection and 10GB music jukebox.

Because sales of the 2011 9-4X are just beginning to percolate, consumer reviews are nonexistent. Suffice to say that Saab seems to have a pretty nifty compact luxury crossover ute here. But then so does Cadillac in its almost identical SRX. It remains to be seen if Euro cachet will overcome traditional posh.

Looking for a Used 9-4X in your area?

Is Saab Coming Back To The US?