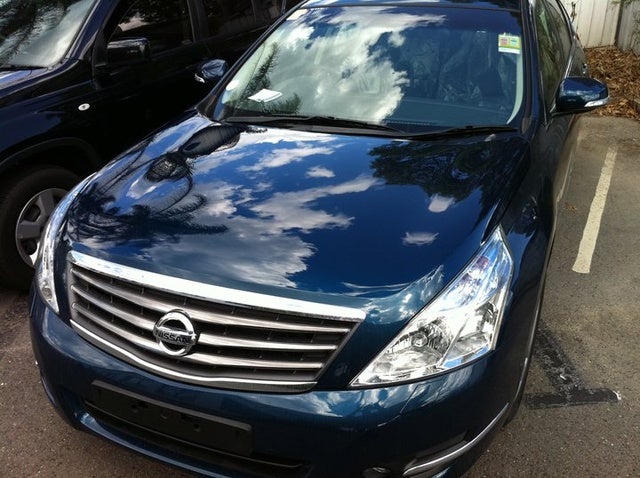 Average user score
4.8 ⁄ 5 stars
Based on 12 reviews
Really Happy With It, Looks Good, Drives Good And Was Worth The Money by Hamid — Performance: Firstly it has 300 bhp (near enough and 4 driving modes with paddle shifters. Then top it off with a DSG style gearbox for smooth and sports modes. Acceleration can be steady or pin you t... Read more
Unique Look, Powefull Engine, Great Luxury Features, Resonable Pce Compaed To Premium Segment by NYSTAR — I like everything in this car, best performance, best valuse for money. very sharp sport power stering. Very quite and smooth ride, great tech features. Unique look, Powefull Engine, Great Luxury fea... Read more
Sporting Luxury by Dora — I loved the combination of the luxurious interior, with the sunroof, leather, heated seats, great sound system, all married with the sporty performance. These features, combined with the affordabilit... Read more

The 2011 Nissan Maxima is the answer to the question "What kind of car might one buy if the nameplate wasn't an issue?" While it competes with cars like the Volkswagen CC, the Acura TSX, and other entry-level midsize luxury sedans, what it offers straddles classes.

The Maxima is priced at the upper end of its segment's range, yet reviewers argue that the interior is closer to that of Nissan's luxury Infiniti models. The cabin design and fit and finish are very well done, and it has dual-zone automatic climate control and a 6-CD changer with optional iPod integration that is among the best in any sedan, according to some tests. And the base S trim includes 18-inch wheels, a sunroof, and eight-way driver and four-way front passenger seats to boot.

Unlike the commercials showing a 370Z stretched to become a 2011 Nissan Maxima, it doesn't quite offer sports-car handling. However, the same V6 engine that powers the Z also holds its own in the Maxima, though it's detuned to 290 horsepower and 261 lb-ft of torque. That's good for roughly 6-second 0-60 times and also provides mileage numbers of 19/26 mpg.

The 2011 Nissan Maxima's engine is mated to a continuously variable transmission, meaning that while one can shift into different modes, the car largely controls the engine's revs. This doesn't seem to bother most reviewers, and in the SV trim with the Sport or Premium package, paddle shifters are available to provide some semblance of control.

Speaking of the 2011 Nissan Maxima in SV trim, it adds foglights, leather seating, and a nine-speaker Bose audio unit to the base configuration, as well as lumbar support. Add the Premium package and the sunroof becomes a dual-panel affair, the front seats are heated, as are the outside mirrors, and rear passengers get a power sunshade. The driver can take advantage of a rear-view camera for parking, 7-inch screen to control the navigation system, and iPod interface and music storage with a single CD-unit.

Switching to the Technology package for the SV trim, the music server is larger and the navigation system includes integrated traffic data and is voice-activated. Heated seats are available in all SV trim vehicles depending on the option package.

While there are five seats, reviewers note that the rear cabin best serves two adults who can enjoy the executive-like seating options. The situation for the third passenger becomes worse if optional rear bucket seats are added. It also limits the amount of storage space; standard 2011 Nissan Maximas come with 60/40-split rear seats, but adding rear buckets limits it to a small center pass-through.

The 2011 Nissan Maxima got the highest ratings for crashworthiness from both the government and Insurance Institute for Highway Safety. Features helping to earn those marks include full-length side curtain airbags, side airbags for the front two passengers, and the standard antilock brakes with traction control and stability control.

If buyers can get past the fact that Nissan occupies its own unique niche, the variety of options and strong design cues make the 2011 Maxima worth checking out for those wanting an entry-level luxury sedan with panache and good road manners.

Users ranked 2011 Nissan Maxima against other cars which they drove/owned. Each ranking was based on 9 categories. Here is the summary of top rankings.

Have you driven a 2011 Nissan Maxima?
Rank This Car

Temp Gauge Stays On Cold Or Just Barely Above Cold

My temp gauge never goes much past cold. Even when I drive it from state to state. Never runs hot, drive it everyday. Air conditioner works. Heat works. Radiator and overflow tank is at the maximum...

Want Help With A Car In Pineville, Louisiana At Diamond Autoplec

Can y'all help me with a car in Pineville, Louisiana