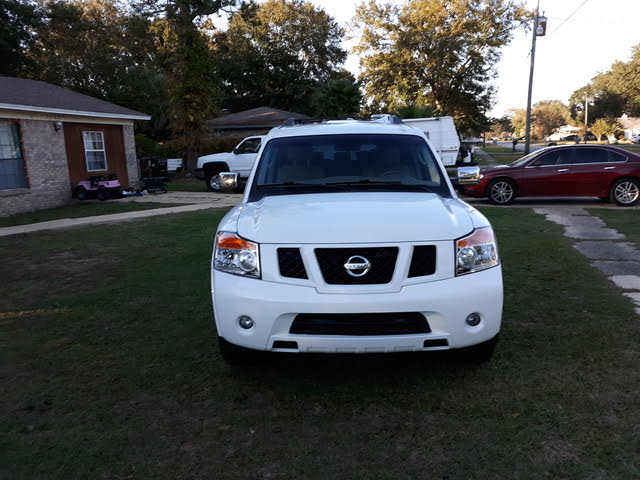 Nissan must have been listening to Bon Jovi when developing the 2011 edition of its Armada. This model year, to quote the New Jersey rockers, “it’s all the same, only the names will change” (or as Nissan puts it, the 2011 Armada’s enhancements consist of a “revised model lineup nomenclature”). Three trims are available this year for the full-size SUV: the SV (known as the SE trim last year), the SL (known as the Titanium trim last year), and the Platinum (keeping the same name). The only other modification for 2011 involves an interior color change from Almond to Stone.

The Armada—appropriately named for its galleon-like size (123.2-inch wheelbase, 207.7-inch overall length, and curb weights well over 5,000 pounds)—will again use a single engine in all three trim levels. The 5.6-liter DOHC Endurance V8 rates 317 hp at 5,200 rpm and 385 lb-ft of torque at 3,400 rpm and, when appropriately equipped, can haul up to 9,000 pounds. While the engine typically runs on regular unleaded—and a whole lot of it—optional Flexible Fuel Vehicle technology will allow the SUV to use either regular gasoline, E85 ethanol, or a combination of the two. The engine is paired with a five-speed automatic transmission with a tow/haul mode and comes with standard rear-wheel drive. Optional all-mode four-wheel drive is available for each trim, operating in rear-wheel-drive mode under normal driving conditions and transferring torque to all four wheels when circumstances demand it. Although the power, acceleration, and handling of the Armada were commended in reviews of the 2010 version, the weight of the Armada results in mixed reviews for braking ability and nearly universal criticism of some of the poorest fuel economy numbers in its class (13 mpg city/19 highway for RWD versions and 12/18 for 4WDs).

Built with body-on-frame construction, the Armada uses an F-Alpha fully boxed ladder frame. Nissan enhances its off-road comfort with a front and rear double-wishbone suspension, front and rear stabilizer bars, and a standard auto-leveling rear suspension for the SL and Platinum trims (designed to level out the vehicle when towing or carrying heavy loads). Wheels and tires vary by trim, with the base SV riding on 18-inch aluminum-alloy painted wheels and Conti-Trac tires. The SL provides 18-inch aluminum-alloy wheels with a machined finish and Michelin tires. The Platinum goes even bigger with 20-inch aluminum-alloy wheels, now chrome clad, again using Michelin tires. A tire pressure monitoring system keeps track of inflation levels, and each trim comes with a full-size spare.

Outside, every Armada is equipped with standard halogen headlights. Foglights are standard for the SL and Platinum, as well as the SV 4WD (the available Driver Package can add foglights to the SV). Each trim has a standard roof rack, although the SL and Platinum feature a chrome finish and roof rack crossbars (available for the SV as an optional accessory). The SL and Platinum trims also use chrome details on the grille, exhaust pipe finisher, and side molding inserts. The SV and SL provide dual power heated outside mirrors, while the power-folding Platinum side mirrors add puddle lights, integrated turn signals, and auto-dimming on the driver’s side. Running boards are standard for every Armada—a key feature, given the lofty height of the SUV. In fact, 2010 reviews noted that it was difficult for shorter drivers to climb aboard the Armada, and its exterior door handles were too high for many children to reach—issues which will mostly likely continue for this year’s model. All three trims also include privacy glass in the second- and third-row windows, as well as in the separate, flip-up liftgate window (a power feature in the Platinum). A moonroof is standard in the Platinum and available for the SL in an options package. For hauling, the SL and Platinum trims are equipped with dual front tow hooks as well as a tow receiver hitch and wiring harness (the optional Tow Package outfits the SV for hauling).

The Armada seats up to eight with front bucket seats, a second-row standard bench seat with a 40/20/40-split fold-flat feature, and a third-row bench seat, which folds flat in a 60/40 split. The SL and Platinum provide standard power folding for the third row (available for the SV as part of the Driver Package). The Platinum trim seats only seven with the Captain’s Chairs Package, which converts the second-row bench seat to captain’s chairs with a removable center console. The driver’s seat in all trims can be customized with eight-way power and a manual lumbar support. The SL and Platinum also adjust the passenger front seat with four-way power, and the Platinum trim has memory settings for up to two drivers for the driver’s seat, mirror, and pedal. The base SV comes with cloth seats but can be upgraded to leather (found standard in the first and second rows of the SL and Platinum trims). The Platinum also heats both the front seats and the steering wheel. Seating in the front is generally considered both spacious and comfortably supportive. The comfort level declines, however, as passengers move toward the back of the SUV. The available second-row captain’s chairs have been criticized as narrow, lacking the contouring and thigh support that can add comfort for adults. The third row was even less of a pleasure, with a flat, hard bench offering little room compared to competitors in its class.

Storage is a big selling point for the Armada, from its 10 cupholders and four bottle holders to its full-length overhead storage with bins, cargo-area under-floor storage, and six cargo tie-down hooks. The rear provides storage flexibility, as well, albeit with less cubic footage than some competitors. With all three rows in place, the rear holds 20 cubic feet of cargo, but 56 cubic feet of storage open up when the third row is folded flat, and when the second and third rows are folded flat, Nissan boasts that a “massive” 97 cubic feet of gear can be stowed (this is less than in the Ford Expedition, Chevy Tahoe, or Toyota Sequoia).

Other standard features found in the 2011 Armada include dual-zone automatic temperature control and rear controls for the air conditioning. All trims also feature power windows, door locks, remote keyless entry (which also opens the power liftgate in the Platinum), an auto-dimming rear-view mirror, cruise control, tilt steering wheel, power-adjustable foot pedals (with memory in the Platinum trim), and four 12-volt power outlets. The SL, Platinum, and SV 4WD provide Bluetooth technology (available in the SV with the Driver Package). The SL and Platinum also come with the Intelligent Key system (which automatically unlocks the doors simply by approaching the car with the fob in your pocket and pushing a button on the handle), and a HomeLink universal transceiver, which allows multiple remotes to be programmed to a single, in-car unit. The Platinum trim adds a hard drive navigation system with 7-inch monitor, XM NavTraffic (with a separately purchased subscription), front and rear sonar (to help compensate for blind spots), and a rear-view monitor (also standard in the SL and available in the Driver Package for the SV), which activates when the vehicle is shifted into reverse.

Audio and technology features vary by trim in the 2011 Armada. The entry-level SV provides an AM/FM/6-CD in-dash system with eight speakers, while the SL and Platinum upgrade to an eleven-speaker Bose audio system with a 6-CD changer for the SL (an option in the Driver Package for the SV). The Platinum trim goes one step further, replacing the CD player with a 9.3-gigabyte Music Box (a hard drive to store music digitally), and supplying an in-dash flash-card reader for MP3/WMA playback (although all three trims provide MP3/WMA CD playback). Every 2011 Armada also comes with standard speed-sensitive volume control, illuminated audio controls mounted on the steering wheel, and rear audio controls with two headphone jacks. A Radio Data System (which provides information about the station, artist, song, etc. on the radio), Dual Media Playback (letting occupants listen to the radio and CD player at the same time using headphones for one of the audio sources) and XM satellite radio (with a separately purchased subscription) are all standard in the SL and Platinum, and available as part of the Driver Package for the SV. The Platinum trim also provides a standard DVD entertainment system with an 8-inch rear screen, remote control, and two wireless headphones. A video port in the center console also allows a camcorder or video game to be viewed on the flip-down screen. The DVD is available in the SL with the Family Entertainment System Package.

The NHTSA awarded the 2010 Armada five out of five stars for front driver-side crash tests and four stars for front passenger crashes, but only three stars for rollovers (for both RWD and 4WD trims). Safety features in the 2011 Armada include antilock brakes with electronic brakeforce distribution and brake assist, active brake limited-slip for RWD and 4WD Armadas, and vehicle dynamic control with a traction control system, as well as six airbags.

With plenty of space for people (at least in the first and second rows) and cargo, short overhangs in the front and rear to help handle the full-size SUV in tight spaces, and a V8 that gives commendable power and acceleration, there’s a lot to like in the 2011 Nissan Armada, whether hauling cargo or kids. Just be ready to limber up before climbing into the high vehicle and, for longer trips, be prepared to stop frequently—not just for the kids’ bathroom breaks, but also to accommodate the Armada’s remarkable thirst for fuel.

Treyzontino Just bought one and love it. Pro and Cons but it futs my aggressive lifestyle and rugged occupation.

Have you driven a 2011 Nissan Armada?
Rank This Car

HOW TO UPDATE THE Navigation System

2011 Armada Has 2 Different Temperature Coming Out

I just got this Nissan last week. I am going to take it in to the dealer this week and have it checked out but I was wondering if anyone else had this happen to them. It would help me to know what I a...

Any idea how difficult it is to replace the rear cup holder in a 2011 Armada? Does the back of the console pop off or are there hidden screws? Couldn't find a YouTube video.