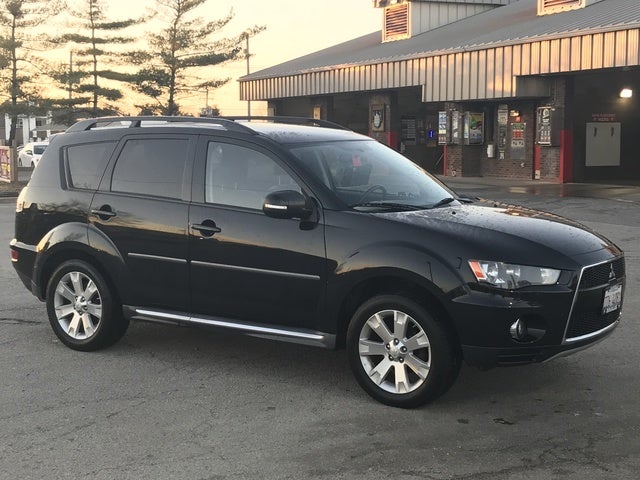 Fresh from a bunch of design, performance, and feature upgrades in 2010, the Mitsubishi Outlander pretty much stands pat for 2011. With an intimidating and aggressive grille and front fascia, an available V6, and a wad of comfort and convenience amenities, this is one value-laden five-to-seven-passenger crossover SUV. Furthermore, its compact exterior disguises a ton of passenger room and 73 cubic feet of cargo space with the rear seats folded. Add one of the best warranties in the market to all that, and this versatile ute has “family friendly” written all over it.

Again for 2011, the Outlander is offered in four trim levels, the base ES, lower midlevel SE, amped-up XLS, and the flagship GT. All-wheel drive (AWD) comes standard with the GT and is available with the SE trim, while both the XLS and GT sport a potent V6 powerplant. The ES and SE trims, meanwhile, each carry the standard inline four-cylinder (I4) engine. Finally, an essentially tots-only third-row bench seat is standard in the SE, XLS, and GT trims, making for a capacity of seven passengers. Granted, holding its own against the likes of the Chevy Equinox, Toyota RAV4, Honda CR-V, and Subaru Forester isn’t going to be easy, but with its tradition of near-constant upgrading and tweaking, Mitsubishi offers one of the best buys in the business with this latest incarnation of the Outlander CUV.

The standard drivetrain for the 2011 Outlander ES and SE trims includes a variable-valve-timed 2.4-liter I4 that combines with a continuously variable transmission (CVT) for 168 hp and 167 lb-ft of torque. This highly regarded four-banger will tow 1,500 pounds of trailer, when properly equipped, and touts 23/28 mpg in the front-wheel-drive (FWD) ES and SE and 22/27 when the SE AWD is selected. The SE AWD’s full-time all-wheel drivetrain, meanwhile, is controlled by a center-mounted mechanical limited-slip differential.

The Outlander XLS and GT trims are delivered with a standard 230-hp 3.0-liter V6 powerplant that, under the management of the standard six-speed auto-manual transmission, also boasts 215 lb-ft of torque. Expect 19/26 from the FWD-only XLS and 19/25 with the AWD-equipped GT. Additionally, the V6 is capable of towing 2,000 pounds of trailer, when properly equipped. As well, the GT sports a transmission hill holder and S-AWC (super all-wheel control), with driver-select modes for dry pavement, slick pavement, or a locking feature, effectively converting it into a four-wheel drive (4WD) crossover ute. Be advised, however, that neither of the Outlander’s AWD configurations is designed for serious off-road use.

Safety has always been a strong point for the Outlander lineup. The tradition continues in 2011 with such standard passenger protection equipment as four-wheel ABS, front side-mounted airbags, front and rear head airbags, front head restraint whiplash protection, daytime running lights, and a remote anti-theft alarm system. For the SE and higher trims, front fog/driving lights are standard, while offered as an option with the ES, and for the XLS and GT trims, turn-signal-integrated mirrors and self-leveling HID headlights are standard equipment.

A bit of a rough ride bedevils many owners of the 2010 Outlander, as does a seemingly gluttonous V6 engine. Seat comfort also discomfits a number of owners, while the awkward and adult-challenged third row seat wins few admirers. On the positive side, however, spiffy styling, loads of standard features, a stellar safety record, nimble handling, plenty of passenger and cargo room, and a feel-good standard wall-to-wall extended warranty add up to a ton of owner kudos.

What's your take on the 2011 Mitsubishi Outlander?

Have you driven a 2011 Mitsubishi Outlander?
Rank This Car

Why Won't My Outlander Start?

I had driven my car a couple of times today and when I got home I let the headlights on to see in my garage. When I went to start my Outlander, it wouldn't start. The battery isn't dead because the ...

How Much Time Take To Change One Engine In One Mitsubishie Outlander?

I Cannot Turn The Ignition Switch At All On My 2011 Mitsubishi Outlander. ...