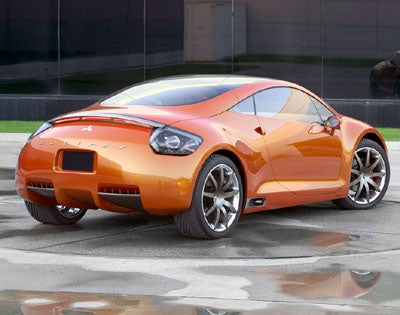 For 2011 Mitsubishi breathes new life into the slightly aged Eclipse coupe platform. In the late nineties the Eclipse was Mitsubishi’s showcase for technology, featuring sporty features like a turbocharged engine and advanced all-wheel-drive. Since 2000, however, the plucky Japanese automaker has focused its performance efforts on the Lancer Evolution sedan while allowing the Eclipse to mature as a more sedate sporty coupe. The freshened 2011 model offers a number of improvements aimed at recapturing the Eclipse’s athletic persona.

Offered only as a four-passenger coupe, the 2011 Eclipse rides on a modified Mitsubishi Galant sedan platform, and as such is front-wheel drive only. Its face-lifted styling is quite attractive and features a blacked-out center roof panel as well as updates to the nose and tail. Standard 18-inch alloy wheels and an aggressively lowered stance round out the look.

Three trim levels distinguish the 2011 Eclipse. The base GS starts just under $20,000 and features an inline four-cylinder (I4) engine and four-speed automatic transmission. A generous helping of standard equipment, including a polished dual exhaust and the aforementioned 18-inch wheels, makes even the base Eclipse a great value. The mid-level GS Sport trim adds high-intensity-discharge xenon headlights, a power driver’s seat, and leather upholstery. The top trim level is the Eclipse GT, which gets a more powerful, 3.8-liter V6 engine and five-speed automatic gearbox. Sadly no manual transmission is available, somewhat undermining Mitsubishi’s positioning of the Eclipse as a true sports car.

In addition to its crisp exterior styling, the 2011 Eclipse features a smart, fashionable interior design. The front bucket seats are aggressively bolstered and have a wide range of adjustment. The driver and front passenger are treated to plenty of room, but the rear seats are rather tight, courtesy of the swooping roof line. The pleasing dash design features crisply rendered, legible instruments with soothing blue back-lighting and an ergonomic center stack with LED display. The grippy three-spoke steering wheel has tilt adjustment, and the sporty shifter is located right where you’d expect. Though carrying capability isn’t its stock in trade, the Eclipse features a surprisingly commodious 15.7 cubic-foot trunk.

Though the lack of a stick shift is distressing, the 2011 Eclipse still features two energetic drivetrain choices. Base GS and GS Sport trims are powered by a 2.4-liter I4 engine with 162 hp and 162 lb-ft of torque. Despite being hampered by a rather clumsy four-speed automatic, the base four revs willingly and makes pleasing noises. Acceleration is brisk, if not especially vigorous, and Mitsubishi estimates that four-cylinder Eclipses will deliver good fuel mileage on regular gas: 20 mpg in the city and 28 on the highway. Six-cylinder power is standard for the Eclipse GT, in the form of a 3.8-liter iron-block engine that churns out 265 hp and 262 lb-ft of torque. Standard MIVEC variable valve timing and a 6,500-rpm redline combine to make the V6 feel quite sprightly. With 100 additional horsepower and an extra cog in the transmission, the Eclipse GT accelerates with gusto. Fuel economy in the GT drops to 16 mpg in the city and 24 on the highway, and Mitsubishi recommends premium unleaded only.

As befits a sporty car, the 2011 Eclipse features a firmly tuned four-wheel independent suspension. The MacPherson strut front and multi-link rear setup allows for precise tuning of the handling characteristics. Though Mitsubishi has done its best to endow the Eclipse with responsive, firmly dampened handling, it has to fight the natural tendency of a front-wheel-drive vehicle to under-steer in sharp corners. While the lowered ride height and larger wheels greatly improve grip compared to the previous generation, there's no hiding the Eclipse’s humble sedan underpinnings.

Another issue that rears its ugly head is torque steer; the V6-equipped GT trim has far too much power for the front end to handle, and at full throttle the steering wheel jerks noticeably. While the overall handling balance is sub-optimal, the 2011 Eclipse has plenty of traction and can still hustle quickly through the curves, it just doesn’t reward the driver in the way a true sports car should. Braking is by ABS-equipped discs at all four wheels, and the pedal feels commendably solid, especially in the Eclipse GT.

Mitsubishi has loaded the Eclipse with safety and security features for 2011. Keyless entry and an alarm system with engine immobilizer are standard. In terms of passive safety, the Eclipse has standard front, side, and curtain airbags, along with seat belt pre-tensioners for the front occupants. The chassis features standard stability and traction control, along with antilock brakes. While the new Eclipse hasn't yet had its artful sheet metal cruelly bent by the government's crash-test program, the previous generation performed very well, and the structurally similar 2011 model should continue that trend.

While lacking true sports-car credentials like a stick shift and rear-wheel drive, the 2011 Eclipse certainly looks the part. Most drivers will find its driving dynamics plenty athletic, and the low price of the base GS trim makes a stylish, sporty coupe quite accessible.

What's your take on the 2011 Mitsubishi Eclipse?

TheHorror I'd have rather saved a few grand and bought a V6 Camry of the time. The latter was just as fast, but wasn't trying much too hard to impress random degenerates.

Have you driven a 2011 Mitsubishi Eclipse?
Rank This Car

How Do I Program The Electric Door Locks?

To automatically lock when I drive and unlock when I turn off the engine?

635 views with 2 answers (last answer about a year ago)

my car makes a click noise coming from what seems the front end everytime I start driving. it doesn't seem like a mechanical problem as much as it seems to be something engaging. The dealership had ...