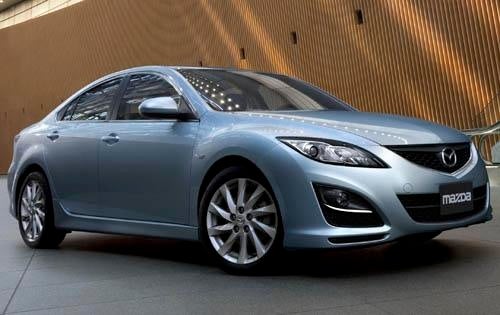 Rough engines, a frustratingly sensitive blind-spot alert system and excessive noise from the 18-inch wheels take away from a solid package in the 2011 MAZDA6.

The MAZDA6 has always offered ample power and impressive handling in a comfortable and attractive package. As Mazda applies the Nagare design treatment across its model lineup, the MAZDA6 has managed to avoid falling victim to this contentious aesthetic bent, but its time is running out. With impressive improvements for 2011, this may be the time to grab your 6 before it becomes like all the rest.

While the MAZDA6 has managed to dodge the “Nagare” bullet up to this point, Mazda saw fit to make plenty of small changes in 2011, both aesthetic and functional. This midsize sedan not only gets some freshened styling inside and out, but it loses an entire trim level – the base SV. This means the 2011 MAZDA6 starts with the Sport trim and moves up through Touring, Touring Plus and Grand Touring trims. While all trims start with a 2.5-liter inline 4, Touring Plus and Grand Touring trims have the option of a 3.7-liter V6 and are subsequently designated “s” trims, as opposed to the “i” of the 4-cylinder trims.

For 2011, changes can be seen in the front fascia with a “smilier” lower grille opening and some pointier headlight and foglamp housings. Taillights have been similarly restyled, and savvy buyers will notice new 17- and 18-inch wheels as well. Touring Plus and Grand Touring trims also get new turn signals integrated into their rear-view mirrors.

Further changes for this 4-door midsize sedan occur on the inside or revolve around safety features, and will be covered in the appropriate sections. 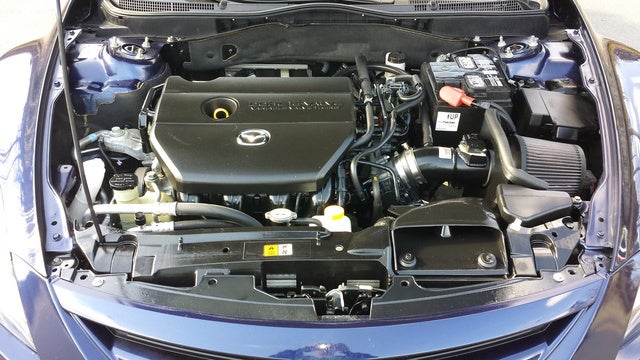 The MAZDA6's 2.5-liter inline 4-cylinder engine offers useable power across the rev range, providing zip even from a stop. This is helped by its 6-speed manual transmission, although long lever throws can rob a bit of fun. Steep hills reveal the only weak point of the 2.5, as its 170 horses don't fully arrive until 6,000 rpm, just 2,000 after its 167 lb-ft of torque. The 5-speed automatic is another useful option, offering quick shifts and smooth action.

Touring Plus and Grand Touring trims get the option of a 272-hp, 3.7-liter V6, an engine that suffers from none of the inadequacies of the 2.5. With 269 lb-ft of torque, it launches with authority and climbs with ease, although some complaints have been heard about its gruff character as it approaches its 6,250 peak-power rpm.

While power figures have remained static for 2011, taller gearing has been applied in all three transmissions, resulting in a large efficiency improvement. For 2011, 2.5-liter engines equipped with the 6-speed manual transmission achieve a 21/30 mpg rating, while the 5-speed automatic mated to the same engine is capable of 22/31. The V6 offers an expected penalty, but still manages an impressive 18/27.

Heeding complaints about a “too-firm” ride, Mazda has given the suspension some attention for 2011, aiming for what they’re calling a “premium quality” ride. This is a welcome improvement in a car that already had some of the best handling in its class. The change isn’t substantial, but a step forward.

For this second-generation MAZDA6, electronically assisted steering was employed that managed to avoid the criticism that many of its competitors suffered. Steering is both light and responsive without feeling wooden or numb, and a tight turning radius makes city and parking-lot driving a pleasure. Standard traction and stability control help maintain composure even when you can’t – a likely occurrence, as the MAZDA6 just begs to be pushed through corners faster and faster still.

The interior of the 6 saw a lot of attention heaped in 2011, with new cloth upholstery, a reconfigured steering wheel and redesigned door armrests. Testers have still voiced some complaints about cheap materials, but most welcome the metal and “piano black” accents, which offer a touch of style. Controls and gauges are large and easy to read, although some have complained of light adjustments that don’t offer enough adjustment, leaving them too bright or too dim in certain conditions. The optional navigation system is easy to use and read, but complicates audio functions unnecessarily.

A standard tilt-and-telescoping steering wheel across the range makes finding the perfect position easy in a vehicle that already has an abundance of room up front, even for taller drivers. The rear is much the same, although Mazda claims three adults will fit with ease – a claim testers have found difficulty substantiating without a diminutive middle passenger.

Sadly noise is a bit of an issue with both engines, as well as the optional 18-inch wheels, which produce a noticeable thrum at speed. The 2.5-liter engine is unrefined overall, with a coarse note regardless of speed, but the 3.7 gets rough only at higher rpm.

In addition to the previously mentioned traction and stability control, all MAZDA6 trims come with 6 standard airbags, 4-wheel antilock discs and front-seat active head restraints. Trims equipped with the manual transmission get hill-start assist for 2011, and all trims get an emergency braking system that flashes the brake lights during hard braking. Mazda’s Pre-Crash Safety system is an optional feature that will preload the seatbelts and brakes and even apply the brakes in the event of an imminent crash. The blind-spot safety system will notify the driver with a beep when a car enters the vehicle’s blind spot, but has been criticized as too sensitive. That said, it can be disabled with a single button push.

Neither the National Highway Traffic Safety Administration (NHTSA) nor the Insurance Institute for Highway Safety (IIHS) have released test results for the 2011 MAZDA6. However, for 2010 the IIHS awarded the MAZDA6 its highest rating of Good for front and side impacts and an Acceptable rating for rollover. The NHTSA has adopted new more stringent testing procedures for 2011, but awarded the MAZDA6 a 5-star rating under 2010 guidelines.

Changes in the 2011 MAZDA6 have been well received, especially aesthetically, as the Nagare treatment looms on the horizon. The steering-wheel-mounted controls had been criticized previously for being unnecessarily complicated, and 2011’s changes are welcome. While both engines perform well functionally, a bit of refinement has been called for, as both can sound too gruff, especially under strain. The optional 18-inch wheels have also been noted as too loud, but they provide some additional grip in a car that already sticks like a thumbtack.

Users ranked 2011 Mazda MAZDA6 against other cars which they drove/owned. Each ranking was based on 9 categories. Here is the summary of top rankings.

Have you driven a 2011 Mazda MAZDA6?
Rank This Car

My Mazda 6 started overheating during a heavy traffic day. Ever since, I noticed it would only start over heating only when the car is idle at a light, traffic, or parked for about 5 minutes and th...

The anti-theft light beep and flashes when I turn off the car. I then have to manually lock the car. I put a new battery in my key fob as well...still happening

I noticed what looked like water under my car today leaving an apt a short while later the car started overheating while idling and blowing only warm air w the AC all the way on cold but once I sta...

Squealing Not Related To Belt

So i recently got a 2011 mazda 6, have noticed it squeals pretty loud when idling. I did the usual and replaced the serp belt and tensioner, but the sound continues. It goes away when i accelerate,...

I had a hitch installed on my 2011 Mazda 6i I want to pull a 7" utilty trailer with my motorcycle strapped down center weighing about 340 pds.theres alot of 70 mph stretch of highway and will goi...