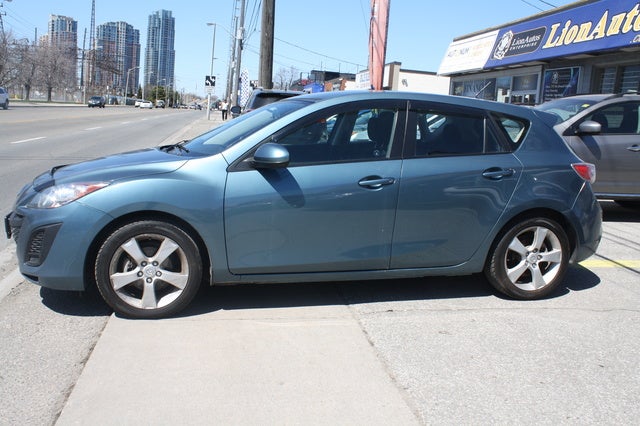 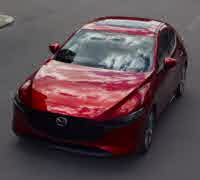 Handling is the runaway high point for the 2011 MAZDA3, and a high-water mark for the class, but that’s ignoring a great 2.5-liter engine and standard luxury often missing from competitors.

The navigation display and 2.0-liter engine need some attention before the 2011 MAZDA3 can truly be called a flawless model.

The 2.5-liter engine remains the solid choice for the 2011 MAZDA3, and the s trims offer the best compromise between comfort and cornering. The options just keep piling on here, making sure you won’t be disappointed even with some of the lower trims. A shame the navigation display annoys so many, as it’s a singular black mark on an otherwise stellar vehicle.

These four-door, front-wheel-drive (FWD) compacts are available in sedan and hatchback styles and account for one-third of all Mazda sales across the globe. Sharing a base platform, albeit modified slightly, with the Ford Focus C1, the MAZDA3 received a substantial redesign last year both technically and aesthetically. With seven trims and two engine options, the MAZDA3 offers a wide range of styles and approaches for a compact, allowing the consumer to tailor their car into an economical city slinker or a sport-touring machine.

For 2011, Mazda has decided to pile on even more features in addition to those they added last year. Whereas in 2010 traction control and antiskid weren’t available even as options for the i SV and i Sport trims, here they have been made standard, and the s Grand Touring trim gets a sunroof and an upgraded Bose stereo as standard features, previously available only as options.

The “i” and “s” trim classifications designate the 2011 MAZDA3's engine, representing a 2.0-liter and 2.5-liter inline four-cylinder respectively. The 2.0 produces 148 hp and is the standard powerplant for the SV, Sport, and Touring trims. The Sport and Grand Touring “s” trims either come standard with or have the option of the 167-hp, 2.5-liter engine, the same found in the MAZDA6. Both engines get an optional five-speed automatic, while 2.0-liter engines have the additional option of a five-speed manual, and the 2.5 can also choose a six-speed manual.

While the 2.0 can struggle to pass at highway speeds, its bigger brother makes up that shortcoming nicely, providing responsive power in all situations. Manual transmissions provide a quicker feel than the automatic, but some testers continue to complain about throw lengths that are on the long side of comfortable.

The five-speed manual will return 25/33 mpg with the 2.0, but opting for the five-speed automatic will actually lose you 1 mpg around town. The 2.5 is no slouch either, although the reverse is true here – 22/29 with the six-speed auto and 21/29 with the six-speed manual, all on regular-grade gasoline. Testers have been finding these numbers to be quite accurate, although skewed somewhat toward highway driving.

Thanks to a rubber-isolated subframe that supports the powertrain, rack-and-pinion steering system, and the lower attachments of the front suspension, the MAZDA3 offers a class-leading ride that is the envy of competitors. The 16-inch wheels of the i trims offer the best comfort and bump isolation, but the slight increase in rough reverb you get with the 17-inch wheels of the s trims is hardly noticeable. In fact, given the stiffer suspension of the s trims, and the resultant lean and roll resistance, it can be said that the s trims give the best compromise of ride and handling. However, if performance isn’t your aim and your needs fall more toward city comfort and highway hedonism, the i should be your best bet.

With a CD/MP3 player, chrome exhaust, bucket seats, a tilt/telescoping steering wheel, a fully independent suspension, and power windows and mirrors all standard on even the base SV trim, the MAZDA3 is very well equipped. With Touring and S models also getting air conditioning, Bluetooth, alloy wheels, cruise, and full power, it really exemplifies the features we’ve taken for granted as givens in recent years. Thanks to Mazda making a sunroof and a Bose stereo standard in the s Grand Touring, the luxury really shows with heated power leather seats, a driver memory system, dual-zone automatic climate controls, directional headlights, and automatic rain-sensing wipers.

The major complaint here is with excess noise from the 2.0-liter when strained, as well as wind rush and tire noise that seems magnified with the hatchback trims. The navigation system has also been criticized for a dinky display that prevents cursory glances, but otherwise controls and gauges are quite convenient. There are hard plastic materials, but most have been used in out-of-sight places, thankfully.

Traction control and antiskid are now standard features for all trims, joining six standard airbags, four-wheel antilock disc brakes, brake assist, and a tire pressure monitor. In NHTSA tests, the MAZDA3 earned a five-star rating in all tests except rollover resistance and side impacts involving the rear passengers, both of which earned four stars.

Owners are still waiting for Mazda to address a slightly uncivilized 2.0-liter engine, as well as the navigation display, which needs to be larger. Enthusiasts still complain about long throws with the manual transmission, but neither the engine nor the manual are the only option. Overall, the MAZDA3 has been incredibly well received and continues to improve every year. Add to this the fact that it offers handling almost unsurpassed in its class, and owners are very happy.

Users ranked 2011 Mazda MAZDA3 against other cars which they drove/owned. Each ranking was based on 9 categories. Here is the summary of top rankings.

Have you driven a 2011 Mazda MAZDA3?
Rank This Car

Asking For My Son...

My son is looking for a car and found one here.. Problem in, it is in Illinois... How does he get to see this car.. Is it brought here to florida ????

Can anyone tell me what this is?

Intermittently will not start or crank. Lights come on. Will usually start eventually within 15 minutes. No codes. Have tried moving shifter to neutral, passing through gears and back into park or ...

22 views with 4 answers (last answer about a year ago)

When it rains my car will be soaked mostly in the back floorboard and seats are a little moist, and I also noticed some of my stuff was wet in my trunk!!! Could it come from underneath my car?? I...