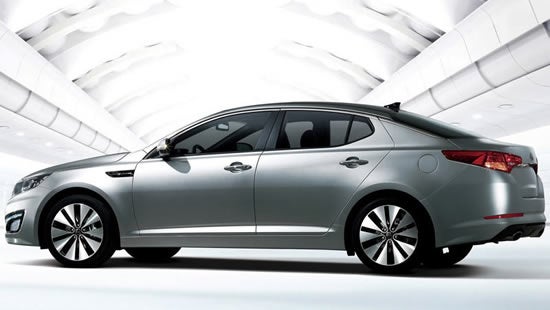 Aggressively styled and temptingly priced, the all-new 2011 Kia Optima joins its well-received Hyundai Sonata sibling near the top of the competitive midsize sedan class. While the outgoing model was the type of decent, unremarkable car that you'd rent from the airport on a business trip, the new 2011 Optima should draw plenty of stares on the street and lots of interest in Kia showrooms.

By adding a dose of excitement to a nearly faultless design, one that's every bit the equal of Japan's finest, Kia has set itself apart from the pack of increasingly similar midsize sedans. The 2011 Optima is darn good looking, with an aggressive nose and a Jaguar-esque roofline that flows seamlessly into a high trunk lid. While ultimately a bit derivative, the Optima offers buyers much more ambitious styling than the staid Toyota Camry or the vanilla Honda Accord.

With every bit of the attention to detail that the competition is known for, Kia has engineered the 2011 Optima to operate seamlessly. While the styling (and the Kia brand's placement relative to Hyundai) imply a certain sportiness, the 2011 Optima isn't likely to shock enthusiasts with its power or handling, even in turbocharged SX guise. Rather the Optima will impress commuters and families alike with its easygoing, polished manner.

Under the skin, the 2011 Optima rides on a version of the Sonata's unit-body architecture. Slightly larger than the Camry but casting a smaller shadow than the limo-like Accord, the Optima provides plenty of space for five passengers and their luggage. All 2011 Optimas feature front-wheel drive and weigh between 3,200 and 3,400 pounds, placing them squarely in the middle of the pack mechanically and structurally.

Power for the 2011 Optima is provided by Kia's excellent 2.4-liter inline four-cylinder engine. Constructed from aluminum and featuring variable valve timing, this motor makes 200 hp and 186 lb-ft of torque along a broad, flat curve. The smooth-running mill delivers lively acceleration while returning good fuel economy. In lieu of a V6 option, Optima buyers can select a 2.0-liter turbocharged four-cylinder that churns out an impressive 274 hp and 269 lb-ft of torque. The turbo four-banger makes the Optima quite a performer in a straight line, though buyers used to a larger-displacement six-cylinder motor might discern a bit of lag in throttle response.

Kia should be applauded for offering a manual transmission in the 2011 Optima, given the assuredly low take rate. Regrettably, the six-speed gearbox and its progressive clutch action are offered only with the base engine, not the hot turbo motor. The other available gearbox is a quick-thinking six-speed automatic with “Sportmatic” control that serves up crisp shifts. Standard traction and stability control ensure that the front wheels retain their grip on the road at full throttle, though torque steer hasn't been completely banished.

The 2011 Optima also marks Kia's first foray into the hybrid power arena. The gasoline-electric Optima, to be offered later in the model year, will borrow Hyundai's in-house hybrid architecture. With new high-efficiency lithium-polymer battery technology and a more natural-feeling automatic gearbox (as opposed to the more common continuously variable transmission design) the 2011 Optima Hybrid will surely provide stiff competition for the more established players in this burgeoning market.

While the 2011 Optima benefits from a four-wheel independent suspension system, it lacks the easy athleticism of Honda's Accord. Body motions are better controlled than in the pillowy Camry, but the Optima's ride-handling balance clearly places a premium on comfort. The electrically boosted power steering is easily manipulated, though it suffers from a lack of feedback.

The 2011 Optima's interior styling displays an attention to detail that's missing even from the class-leading Accord. Key to Kia's success is its comparatively simple, clean dash design and use of high-quality materials. While some small details, such as the door panels, look tacked on, the overall theme is cohesive and best of all, intuitive. Front and rear passenger room is on par with the Camry's, though overall elbow room trails the especially voluminous Accord. The stylishly high beltline does limit rear visibility somewhat and also makes for a rather tall reach to close the trunk.

Kia will offer the 2011 Optima in four trim levels. Even the base LX, the only trim offered with the stick shift, comes loaded to the gills with standard power accessories, an auto-dimming rear-view mirror, a trip computer, an air-conditioned glovebox, and a six-speaker CD stereo with Bluetooth and satellite radio. The step-up EX trim nets buyers a smart key push-button start system, dual-zone electronic climate control, and leather seats, while the top-of-the-line Optima SX cultivates a sporty persona with carbon-fiber interior trim, paddle shifters, LED taillights, and snazzy 18-inch alloy wheels.

Befitting its family sedan status, the 2011 Optima is equipped with a plethora of standard safety features. Front, side, and curtain airbags are standard, along with active head restraints that Kia says help prevent whiplash. While the new 2011 Optima has yet to be crash-tested by the NHTSA, the structurally similar 2011 Sonata received four stars for frontal crashes and five stars for side impacts in a recent evaluation.

Users ranked 2011 Kia Optima against other cars which they drove/owned. Each ranking was based on 9 categories. Here is the summary of top rankings.

Have you driven a 2011 Kia Optima?
Rank This Car

When I Step On The Gas My Car Is Very Sluggish To Respond. It Does Not Misf...

KIA Optima Will Not Start Totally Dead What Could That Be

I have a 2011 optima went to start the car with the push button start and nothing happened. I tried to jump it off and nothing totally dead what could this be never had any trouble at all with the ...

I have a 2011 Kia Optima sx. A few weeks ago I accelerated to go around someone and my car cut off. A few times it woukdnt start but if you leave it a few minutes to a few hours it starts as if not...

My Lights On The Inside Won't Turn Off No Matter What I Do . Help!

I recently replaced the alternator in my 2011 Kia Optima, due to having a steady battery light illuminated. The alternator was confirmed bad at parts store. All good for just over a week, now th...

336 views with 3 answers (last answer about a year ago)