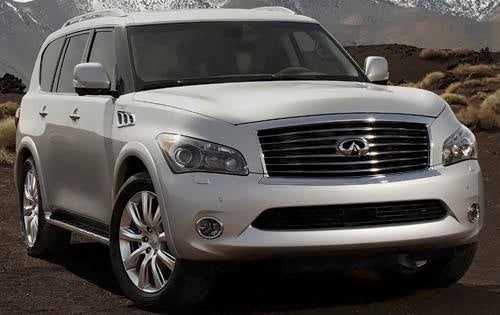 A new look will greet those bent on kicking the tires of the 2011 Infiniti QX56. Front, rear, inside, and topside all get some sexy exterior curves, added cabin refinement, and more user-friendly doo-dads, giving this big SUV a jolt of much-needed distinction. Meanwhile the V8 powerplant also gets a tweak or two, with direct injection for some 80 extra ponies and 20 additional lb-ft of torque, and variable valve timing for (marginally) better fuel economy. Offered in only one Base trim level, the seven/eight passenger QX56 is delivered in the standard rear-wheel-drive (RWD) configuration, with on-demand four-wheel drive (4WD) available – at a significantly heftier price.

Roomy and refined, brawny and bodacious, the 2011 QX56 offers passengers a more high-end cabin atmosphere, while its durable construction ensures added safety and the oomph to tow up to 8,500 pounds of trailer. Based on Nissan’s U.S.-deprived Patrol SUV, this top-shelf Sport Ute remains one of the few body-on-frame heavy haulers still standing, and competes with the likes of the Lincoln Navigator and Cadillac Escalade in the somewhat oxymoronic, but no doubt lucrative, luxury SUV market.

Powering this behemoth is the newly beefed up 5.6-liter V8 engine, now under the auspices of a standard seven-speed auto-manual transmission with hill-start assist. Expect some 400 hp and 413 lb-ft of torque out of this beast, but, beware that with an estimated 14/20 mpg, a familiarity with area gas stations will be required.

Outright value is cited as one of the major reasons owners chose the 2010 Infiniti QX56, though the understandably dismal fuel efficiency of this outsized trailering machine diminishes its luster a bit for some. Iffy front brakes, inadequate front seat support, and a frustrating lack of separate iPod-nav-audio interface also leave some owners cold. Looks, over-the-top standard features, a roomy and comfortable cabin, plush ride, and confidence-inspiring bulk, however, have virtually all owners praising their QX56. The 2011 version, due this summer, should be even better.

GuruFW47L Cars R Us is awesome!!! Lilly Gino and Lindsey are awesome and helped me get in this awesome truck

Users ranked 2011 INFINITI QX56 against other cars which they drove/owned. Each ranking was based on 9 categories. Here is the summary of top rankings.

Listing A Car For FREE

I cannot get past the page that wants $29.95 to list my car? We have listed three vehicles through this page in the past and all we are attempting to do is relist? This looks like a new page. We used ...

32 views with 4 answers (last answer about a year ago)

My kids were playing around with the remote soon after we got this car and now one of the screens is not working. It shows the display setup menu but it won’t show the movie playing. Is there an ea...

Cannot post my vehicle on CarGurus. Keep getting error, what should I do?

Cant find my keyfob inside the car! =(