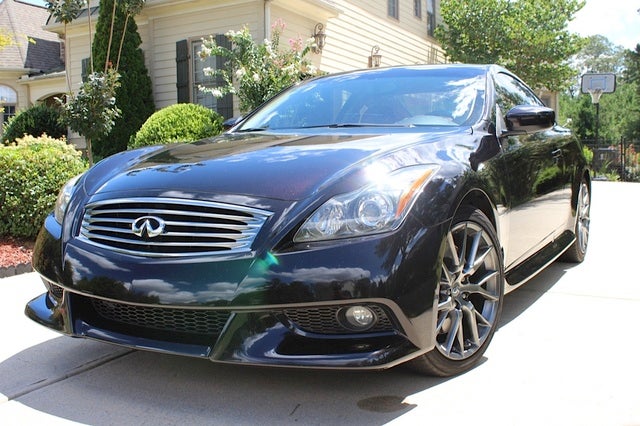 Though it performs exceptionally well, the 2011 G37 suffers from a lack of refinement in its engine and suspension.

Those seeking a less-expensive alternative to a BMW or Mercedes will find much to like in the 2011 Infinti G37. The 2011 G37 offers interior amenities aplenty and serves up a spirited driving experience. While a few cheap details hold the G37 back (and remind you where the engineers cut costs), the stylish Infiniti's combination of luxury and performance adds up to lots of value.

Mostly unchanged for 2011, Infiniti's bread-and-butter G37 continues to woo buyers with its curvy, aggressive styling. Offered as a two-door coupe, a hardtop convertible and a four-door sedan, the G37 rides on a version of the Infiniti/Nissan FM architecture. This rear-wheel-drive, unit-chassis arrangement ensures that the 2011 G37 benefits from an even weight distribution for better handling.

While the rear-drive G37 is the enthusiasts' choice, snow-belt buyers can take advantage of the all-wheel-drive G37x. All G37s are powered by Infiniti's ubiquitous “VQ” six-cylinder engine, connected to either a six-speed manual gearbox or a high-tech seven-speed automatic unit. Crisp performance is a G37 hallmark, and the powerful motor responds to the throttle with enthusiasm.

Befitting its status as a luxury car, the 2011 G37 is quite well-equipped. The G37 Journey trim includes heated leather seats and a six-speaker stereo system. Also standard are Bluetooth phone connectivity, a back-up camera and an auto-dimming rear-view mirror. The loaded G37 Sport model gets standard GPS navigation, a power moon roof and a ten-speaker Bose stereo. 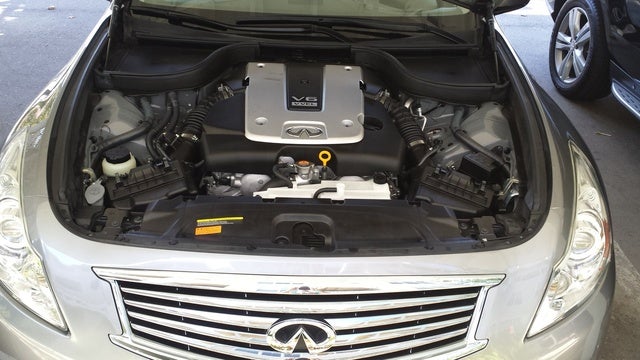 All 2011 G37s feature a 3.7-liter V6 engine based on Infiniti's venerable “VQ” architecture. With all-aluminum construction and variable valve timing, the naturally aspirated V6 delivers a healthy 328 hp and 269 lb-ft of torque. Though it lacks the turbine-like smoothness of the benchmark BMW inline-six, the V6 engine's large displacement ensures immediate throttle response. Acceleration off the line is quite brisk, and the G37's motor pulls strongly all the way to its 7,000-rpm power peak.

Infiniti's advanced seven-speed automatic transmission is standard across much of the 2011 G37 lineup. With intelligent programming technology and a wide ratio spread, the automatic delivers crisp, timely shifts. Sport-trimmed G37s feature a six-speed manual gearbox that ratchets up the driver involvement factor considerably, though it's slightly ropy action is again off the mark set by BMW. Rear-drive G37s offer near-perfect weight distribution, while the optional electronic all-wheel-drive system ensures maximum traction in any weather.

The 2011 G37 corners with aplomb, no surprise given its fully independent suspension. A double-wishbone setup up front pairs with a multi-link arrangement in the rear to deliver balanced, enthusiastic handling. Though not as supple and nuanced as the BMW 3 Series it benchmarks, the G37's chassis serves up plenty of grip and breaks away smoothly at the limit. The speed-sensitive power steering is accurate, nicely weighted and delivers excellent feedback. All G37s feature standard traction and stability control.

Given that Infiniti has positioned the 2011 G37 as a sports sedan, it's no surprise that the ride-handling balance is tuned more for performance than for comfort. That said, the base G37's highway ride is plenty composed over all but the largest road imperfections. Sport-trimmed G37 models feature stiffer spring rates and larger wheels that improve cornering grip but degrade the ride noticeably. Sport trims also get an upgrade to larger, ventilated disc brakes with four-piston calipers.

Though the design is showing its age, the 2011 G37's interior space is well-executed and plush. The power-operated seats are comfortable for long drives and upholstered in soft leather. Optional sport seats include an increased range of adjustment and firmer bolstering, though they aren't suited to the big and tall set. The G37's dash is rendered in soft-touch plastics and brushed aluminum and features easy-to-operate secondary controls. The thick, leather-wrapped steering wheel feels great and adjusts for both rake and reach.

Cabin space in the 2011 G37 sedan is decent, though the large transmission tunnel forces the center passenger to angle his or her legs unnaturally. The G37 Coupe and Convertible feature much less rear seat headroom, courtesy of the stylish roof line. Befitting its sporty nature, the G37's cabin isn't hushed to Lexus levels of isolation, but rather allows for road noises and textures to permeate. Trunk space in the sedan is plentiful, less so in the coupe and convertible.

Standard front, side and curtain airbags ensure that the 2011 G37 is a safe place to be in the event of a crash. A sophisticated stability and traction control system helps the G37 stay on an even keel during emergency maneuvers. Infiniti says the 2011 G37's active head restraints help reduce whiplash-type injuries in certain collisions. In NHTSA frontal crash-tests the 2011 G37 sedan received five stars for driver protection and four stars for passenger safety. Side impact testing resulted in a five-star rating for front and rear seat occupants.

Owners of the Infiniti G37 are full of praise for their car's sporty driving dynamics and powerful engine. The G37 Sport, in either coupe or sedan trim, receives particularly high marks for driver enjoyment. While the G37 is praised for its frisky handling on Sunday morning drives, it's performance in daily commuting duty gets low marks. A lack of storage space, poor rear visibility in the G37 Coupe and quick-wearing, expensive tires limit the Infiniti's usefulness as an errand-runner.

When I shut off car - and making sure foot is off brake - I get out of car and press lock button key fob the car goes into accessory mode? Has never done this before. Runs fine otherwise.

About The Vehicle Infinity G37

I WANT TO PAY CASH TODAY BUT DON'T HAVE RELIABLE TRANSPORTATION TO COME AND PICK UP.. I'M STAYING IN THE SLEEP INN HOTEL IN PALATKA FLORIDA

2011G37xs For Sale! Car is in great condition Never been raced or abused Clean Status Has all the newer features Sport Model AWD so it’s drivable in the snow Entry Level Luxury Sports Car Paddle S...

I appears no one has given a proper answer to why flipper doors fail or to fix. Mine is on the LH side. The top will go up and down but only if one places the LH flipper door in the proper placement t...

Can You Burn Regular Unleaded Gasoline In Th G37?

And not do any damage?