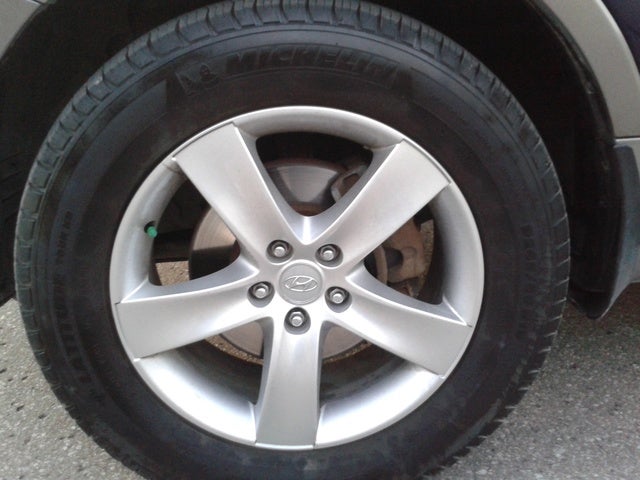 Looking for a Used Veracruz in your area?

Though usually not at the top of buyer's lists, the 2011 Hyundai Veracruz presents perhaps the biggest bang for the midsize crossover buck. This three-row, seven-passenger CUV comes loaded with standard amenities, a fairly potent V6, plenty of cargo room (87 cubic feet with the rear seats folded), and an outstanding warranty. Expected trims mirror those of last year, with both a base GLS and high-end Limited trim level. Each is delivered in either a standard front-wheel-drive (FWD) or available all-wheel-drive (AWD) configuration. Additionally, though expected to be little changed from 2010, upgraded heated and ventilated front seats will be available for the 2011 Veracruz. Face it, for thousands of dollars less, owners of this snazzy mini-‘Ute will drive a vehicle that looks, feels, and pampers pretty much the same as a Lexus RX 350. Other competition includes Honda’s Pilot, GMC’s Acadia, Chevrolet's Traverse, Buick's Enclave, and Ford’s Flex.

Powering the 2011 Veracruz is the same 3.8-liter V6 as last year. Combined with the standard six-speed auto-manual transmission, this loaded crossover can be expected to put out 260 hp and 257 lb-ft of torque, to the tune of a somewhat tepid 17/23 mpg in the FWD versions, and an even more wallet-grabbing 16/22 in the AWD trims – and that’s with variable valve timing. Towing maxes out at 3,500 pounds.

Since its 2007 intro, the Veracruz has been impressing reviewers and owners with its plethora of standard appearance features and creature comforts. For 2011, this tradition is expected to continue. The base 2011 Veracruz GLS comes equipped with 17-inch alloy wheels, a roof rack, rear spoiler, cloth upholstery, heated front seats and power-adjustable driver’s seat, split-folding second- and third-row seats, power windows and heated mirrors, remote power door locks, a tilt/telescoping leather-wrapped steering wheel mounting audio and cruise controls, and a 172-watt, single-CD player with six speakers, XM satellite radio, and a USB connection.

Owners of the 2010 Veracruz seem most disturbed by poor gas mileage and a lack of inventory at dealerships. A dearth of cabin storage and tepid wheel designs, as well as some iffy handling and uncomfortable seats, also causes some angst among owners. Value, however, along with a spectacular warranty, makes the Veracruz a hit with most owners. The fact that it’s loaded with features, looks pretty snazzy, has plenty of cabin and cargo space, and packs V6 power ought to keep this smart CUV a potent competitor in the crowded crossover market.

What's your take on the 2011 Hyundai Veracruz?

Have you driven a 2011 Hyundai Veracruz?
Rank This Car

Looking for a Used Veracruz in your area?

Can You Get Info On A Car That Already Sold?

I saw a car and it sold but wondering if I could get a copy of the listing?

Can I Start My Hyundai Veracruz Without A Proximity Key