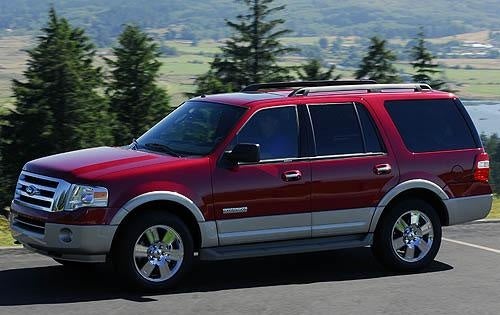 The bulky 2011 Expedition isn't as refined as some of its full-size competition, and well-equipped versions wear hefty pricetags.

Though the jumbo SUV market isn’t what it once was, Ford has seen fit to make a few notable upgrades to its outsize Expedition for 2011. With new wheels and a deft shuffling of options packages, Ford hopes to hold buyer interest against a rising tide of imports, including Toyota’s Sequoia and the upcoming second-generation Nissan Armada. For its part the 2011 Expedition and its long-wheelbase EL stablemate offer loads of space for passengers and cargo while maintaining a (relatively) carlike demeanor courtesy of their four-wheel independent suspension.

Riding on Ford’s T1 platform (derived from the F-150 pickup), the Expedition is, of course, a full-size, body-on-frame SUV. For 2011 the base Expedition rides on a 119-inch wheelbase, while the lengthened EL model offers 131 inches between the axles. Both varieties seat eight passengers, but the EL variant does so in significantly more comfort, particularly in the third row. Short-wheelbase (if 119 inches can be called short) Expeditions can tow up to 9,000 pounds with an optional trailer package, while EL trims can pull 8,700 pounds.

Potential Expedition buyers should carefully consider the virtues (and limitations) of a large SUV. Since we have passed the point in time where a huge SUV was a fashion statement, the Expedition must stand on its merits. For those who trek 500 miles to the cabin each summer with four kids, a ton of luggage, and a pontoon boat in tow, the Expedition, preferably the huge EL model, makes eminent sense. If you just need a vehicle for commuting and trips around town, there are many excellent smaller SUVs (and cars) with all-wheel-drive that will satisfy your needs without drowning you in gasoline bills.

For 2011 the most notable change to the Expedition line is the deletion of the famous Eddie Bauer trim package. The "Eddie" now joins such illustrious names as Givenchy, Mark Cross, and Bill Blass in the automotive co-branding graveyard; it’s been replaced by a new XLT Premium Package with similar levels of equipment and a two-tone color scheme. Other minor changes for 2011 include the aforementioned new wheels (some with an attractive machined finish) and an upgraded rear-seat DVD system that integrates LCD screens into the back of the headrests. A new color (Golden Bronze Metallic) also debuts, along with new floormats in the top-dog King Ranch trim. 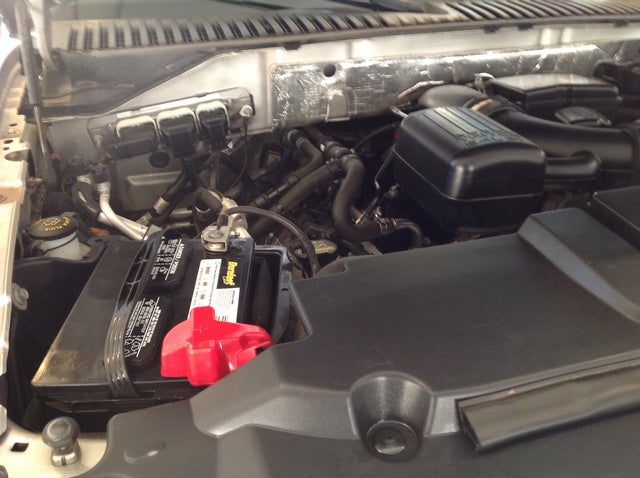 For 2011 all Expeditions feature Ford’s stalwart 5.4-liter V8. Those hoping to see the new 6.2-liter gas motor under the hood will be forced to wait a bit longer. The tried-and-true iron-block 5.4-liter engine churns out a respectable 310 hp and 365 lb-ft of torque. Featuring a somewhat modern aluminum three-valve SOHC head, the V8 responds quickly to the whip and even delivers a nice exhaust burble. Though burdened by a hefty, 6,000-pound curb weight, V8 Expeditions get from 0-60 mph in 8.5 seconds.

Much of the credit for the Expedition's relatively sprightly acceleration goes to its excellent six-speed automatic transmission. Featuring smooth shifts and well-chosen ratios, this gearbox helps maximize the V8's power. Yet when fully laden and pulling a trailer, the 2011 Expedition feels noticeably more sluggish than its rivals, all of whom offer a V8 with close to 400 hp.

Fuel economy, at 16 mpg combined, is somewhat less than stellar. Ford could really earn some street cred by installing its massive new PowerStroke diesel in the Expedition. Not only would a diesel Expedition become the de facto choice for heavy haulers, it would likely make some serious fuel-economy gains, too. As for driveline choices the 2011 Expedition can be equipped with rear-wheel drive (mainly for towing) or part-time four-wheel drive, the latter using a traditional high/low transfer case to drive the front wheels.

Though it reduces cargo space, the 2011 Expedition’s four-wheel independent suspension (consisting of a front control arm setup paired with a multilink rear) allows for much more confident handling than the live rear axle setup found underneath most of its full-size competitors. On the highway and around town, the Expedition rides well. The suspension is firm without being harsh, like some truck-based SUVs. Despite its three-ton bulk, the big Ford moves more delicately and leans less through turns than a Chevy Suburban or Nissan Armada. Its steering is predictably numb, but it's mostly accurate and features variable assist that dials down the effort at parking-lot speeds.

Braking is by discs all around with antilock control, providing mostly drama-free stopping power in spite of the rather mushy pedal feel. Off-road the low-range transfer case will likely deliver fine performance, but the vehicle's considerable bulk might cause problems on tight trails. In the snow the Expedition offers great traction and mostly surefooted handling. However, drivers should be mindful that this rig weighs almost three tons, and the laws of physics aren't subject to interpretation: Given enough speed and steering angle, it's easy to foresee the big Expedition performing some seriously scary gymnastics.

Inside the 2011 Expedition features a straightforward, family-friendly design. The dashboard layout places most controls within easy reach, but the sheer size of the vehicle means some switches require a bit of stretching. Lower trim levels clad the dash in a rather chintzy grade of plastic that contributes to a rather dour atmosphere. Only in the top-dog King Ranch edition does the interior display a hint of style; supple Chapparal stitched leather and a liberal dose of chrome provide a warmer ambiance.

The Expedition's adjustable pedals and upright driving position will accommodate nearly any driver, but the seats themselves lack any lateral support and just aren’t very comfortable, especially on long trips. The second row also has plenty of space, but if you often carry a full load of passengers, the EL model’s third row provides much more hip and shoulder room. Behind the third row there is surprisingly little room for cargo in short-wheelbase Expeditions; again the EL trim is the way to go if you carry a lot of luggage.

With the disappearance of the Eddie Bauer line, the 2011 Expedition comes in three flavors: XLT, Limited, and King Ranch. The XLT features standard power windows, locks, and mirrors, plus cruise control and a single-CD stereo with MP3 connectivity. An optional premium package adds leather and two-tone exterior paint. Limited trims get a big bump up in equipment (and price) with standard heated and ventilated power seats with memory, a 6-CD stereo that pumps out 340 watts, and a back-up camera, an essential item in such a big beast. Ultimate-spec King Ranch models get special leather seats embroidered with the logo of the eponymous Texas spread along with special Pueblo Gold two-tone lower paint.

Expedition buyers are, for the most part, very happy with their trucks. Its roomy interior draws high marks for comfort and utility, especially when carrying several adults. Some criticize the cheap plastic on the dash, but nearly everyone likes the control layout, and Ford's SYNC telephone/MP3 integration wins universal praise. Most buyers were pleased with the performance of the Expedition, though nearly everyone complains about the big truck's seemingly insatiable appetite for fuel.

What's your take on the 2011 Ford Expedition?

Have you driven a 2011 Ford Expedition?
Rank This Car

Clank Sound And Won’t Turn Over To Start

My daughter drove the 2011 Expedition to the store, and when coming out of the parking lot, it made a noise (loud pop) and stopped. We had it towed to her school apartment and had a mechanic go o...

Why Is There No Price Showing On My 11 Ford Expedition ?

Will These Above Mentioned Anti-theft Blinking/ Car Wont Start-solutions Wo...

Anti theft light blinking rapidly and car will not start.

128 views with 4 answers (last answer about a year ago)

Why Is The AC Only Blowing Cold In The Rear?

Front AC will not blow cold but the rear AC does. I have to turn on the rear vents, put it all the way to cold and turn on the air recycle then it starts blowing cold from the front. Does anyone kno...

161 views with 4 answers (last answer about a year ago)