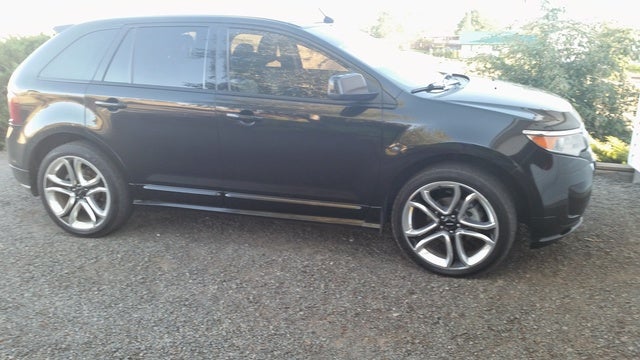 The Ford Edge crossover vehicle receives an evolutionary rather than a revolutionary makeover for 2011, highlighted by a curvy new exterior design, three new powerplants, and an updated interior with a number of new high-tech features, including the well-reviewed MyFord Touch driver-connect system.

The revamped Edge still doesn't offer an optional third-row seat, like many of its competitors, and some feel that because of the new exterior design, the Edge has lost some of its distinctiveness.

The 2011 Ford Edge resides in an increasingly competitive automotive segment, but its extensive makeover should pay dividends by keeping the crossover vehicle on the radar of prospective buyers. While some might miss the more distinctive lines of the original Edge, the vehicle's new curvy exterior displays a more contemporary look, and the interior updating was especially needed. Add in a number of buzz-worthy tech features, as well as the Edge's adept handling and well-regarded safety features, and it all adds up to a package that should continue to appeal to owners with busy families.

The Ford Edge receives an exterior design refresh for 2011, replacing the original boxy looks with more fluid, curvy lines. Ford restyled the Edge's hood, deepened the grille, and reshaped the front fascia, fenders, headlights, and taillights. In addition, the Edge gets three new powerplants for 2011 and redesigned 18- and 20-inch wheels, as well as standard 22-inch wheels for the revamped Edge Sport trim. The Sport also comes with standard paddle shifters, a Tuxedo Black three-bar grille (as opposed to the chrome grille on the other trims), smoked headlights, and a sport-tuned suspension, all of which help differentiate it from the rest of the Edge lineup.

The Edge crossover vehicle, which combines elements of an SUV and a sedan, created some buzz when it debuted in 2007, and received a number of awards in its early years, as well as positive reviews from auto reviewers. Its unique styling appealed to a wide range of buyers, especially owners with families. In redesigning the Edge, Ford has endeavored to retain the elements and features owners like while improving the vehicle's weak areas, including its cabin. For 2011, the Edge offers a quieter, more comfortable interior, with better components, materials, and ergonomics, as well as a new MyFord Touch driver-connect technology, which enables drivers to manage and configure many of the Edge's interior systems.

The Edge comes in SE, SEL, Limited, and Sport trims for 2011. All trims except the entry-level SE are available with either front-wheel drive or all-wheel drive. The Edge seats five passengers in two rows. However, Ford does not offer the Edge with an optional third-row seat, which many consider a mark against it, since competitors such as the Chevy Traverse and the Toyota Highlander seat up to seven passengers in three rows. 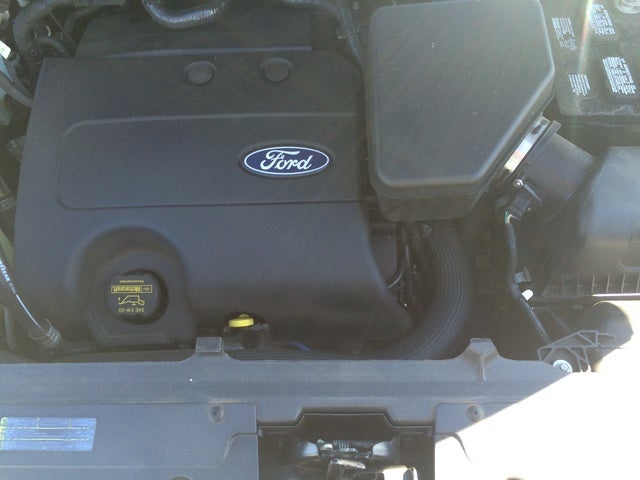 A new 3.5-liter V6 engine powers the Edge SE, SEL, and Limited trims. The V6 produces 285 hp, a boost of 20 hp over the previous year's standard powerplant, and features Twin-Independent Variable Cam Timing (Ti-VCT), which helps improve performance and fuel efficiency. The engine generates 253 lb-ft of torque while managing fuel economy numbers of up to 27 mpg on the highway.

The Sport trim comes equipped with a new 3.7-liter V6 engine, which boosts horsepower to 305 and torque to 280 lb-ft for sportier performance. The bigger V6 engine also features Ti-VCT, which enables the Sport to perform better than many of its competitors, including the BMW X5, Lexus RX350, and Audi Q5, according to Ford.

Both V6 engines mate to six-speed automatic transmissions, although the transmissions in the SEL and Limited include SelectShift technology for smoother, more responsive shifting and acceleration, while the Sport's transmission includes steering-wheel-mounted paddle shifters for manual shifting.

Later in the 2011 model year, Ford will offer the Edge with a new fuel-efficient, 2.0-liter EcoBoost four-cylinder engine, which will link to a specialized six-speed transmission. The new four-cylinder will improve fuel economy by 30 percent compared to the Edge's original V6 from 2006, according to the automaker, while still delivering capable performance.

Owners of SEL, Limited, and Sport trims can add Ford's active AWD system, which provides optimal traction and stability on slick road surfaces. In addition, Ford offers an optional Class II Trailer Tow Package for the SEL and Limited trims. When equipped with the package, which includes trailer sway mitigation to help drivers maintain control of the vehicle, the Edge can tow up to 3,500 pounds.

In addition to updating the Edge's exterior design and powerplants, Ford retuned the vehicle's suspension for 2011. The automaker adjusted the shocks, springs, and stabilizer bars for a tighter feel and less body lean in corners, while ensuring a comfortable ride on uneven road surfaces. The Edge rides on an independent front suspension with MacPherson struts, gas-pressurized shocks, and a stabilizer bar, while the rear receives an independent multi-link configuration, and also includes gas-pressurized shocks and a stabilizer bar.

Since its introduction, the Edge has continually received good marks from owners and reviewers for its comfortable ride and its ability to smooth out the road's rough spots with ease, and that should only improve for 2011, thanks to the retuned suspension. In addition, by pushing the wheels out to the corners, Ford has ensured a stable ride despite the Edge's high center of gravity. Power rack-and-pinion steering comes standard on all trims.

The 2011 Edge sports new four-wheel disc brakes, which provide better stopping power than the previous year's version. The automaker updated the rotors and brake friction materials, and revised the pedal ratios for a firmer, more confident feel and better response when the driver steps on the brake pedal. In addition, Ford adds a number of new brake-related features for 2011, including Hill Start Assist, which helps prevent rollback on hills, and brake assist, which aids the driver when making emergency stops. 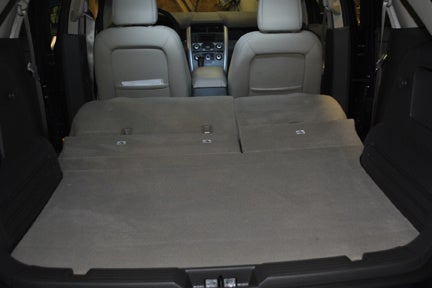 The original Edge received some knocks for its cabin, particularly with regard to the quality of the materials. But Ford set out to rectify the situation with the redesigned 2011 Edge. For starters, the automaker used more sound-absorptive materials throughout the interior to reduce noise and ensure a quieter cabin. Foam baffles on the fenders and D-pillars also help keep out intrusive road noise.

The Edge Limited and Sport trims come equipped with the new MyFord Touch system, which enables drivers to manage and configure the vehicle's in-car technologies. Replacing traditional buttons, knobs, and gauges, the MyFord Touch system includes an 8-inch color screen on the center stack and two driver-configurable 4.2-inch LCD displays on the instrument cluster, as well as five-way switch pads on the steering wheel. Using the system, drivers can choose the information that displays on the instrument cluster, and adjust cabin features to match personal tastes.

Other new features for 2011 include iTunes Tagging, which is part of the standard HD radio in the Limited and Sport trims. By pushing the Tag button on the touchscreen display, drivers can store specific song information in the radio's memory, transfer the information via docking to their iPod, and later purchase the song from iTunes.

Unique interior features for the Sport trim include Charcoal Black leather-trimmed seats with metallic inserts and contrast stitching, as well as aluminum pedals. Owners can add a power liftgate, a voice-activated navigation system, and a Panoramic Vista Roof, which opens three times larger than a traditional moonroof, on all trims except the SE.

Early reviewers generally give positive marks to the new exterior design, although some feel the 2011 Edge, with its more rounded lines, has lost some of distinctiveness. The deep-mouth grille has a definite Audi/VW feel, some reviewers point out, though most like the look. But reviewers reserved their most flattering comments for the Edge's new interior, which most feel is a vast improvement over the previous year's model. The new MyFord Touch system in particular draws very good comments from reviewers. The new EcoBoost four-cylinder engine also proves to be a hit with reviewers. Overall, most agree the Edge's updates are timely and well-executed, and just could re-generate some of the Edge's initial buzz.

Users ranked 2011 Ford Edge against other cars which they drove/owned. Each ranking was based on 9 categories. Here is the summary of top rankings.

Have you driven a 2011 Ford Edge?
Rank This Car

How To Find Out How Many Viewed My Listing

I have a 2011 Ford edge and when I stop or back up my low oil pressure light comes on. No rpms and I have just changed the oil pressure switch, and did a LOAF change....what next? There are appro...

The Car I Was Offering Has Been Sold. Can You Cancel The Ad?

Is A CarFax Report Available Thru You

Can you supply a CarFax report on my vehicle listed with you? The person contacting me has requested one.

After Filling Up The Tank My 2011 Ford Edge Check Engine Light Comes On And...