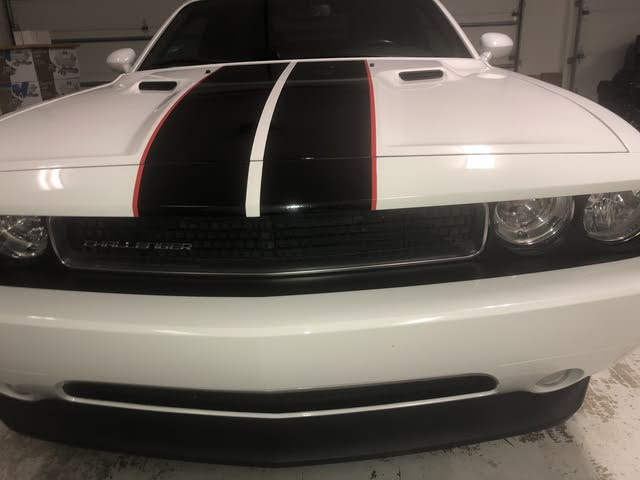 The Challenger got creamed in 2010 comparison tests, and Dodge seems to have taken it to heart. Amongst a long list of complaints, the Challenger was criticized for its hefty, barge-like demeanor – weighing in as it does at just shy of 4,000 pounds. Answering in turn, Dodge has decided not to address the excess weight, but instead to add additional oomph and mess with the suspension. Band-Aids are best, after all.

So for 2011 we see two engine updates for the Challenger – the new Pentastar 3.6-liter V6 and a bored and stroked version of the old 6.1-liter Hemi V8, now with 6.4 liters of displacement. The V6 is slated for the base SE trim. It’s the same engine you’ll see in everything from the 300 and Grand Caravan to the Wrangler, putting out 305 hp and 268 lb-ft of torque. For efficiency, it’s fitted with dual variable valve timing as well as the Multi-Displacement system, which can deactivate cylinders when full power isn't required. It’s a stout engine with an increase of 55 hp and 18 lb-ft of torque over 2010’s V6, but it still falls short of the offerings from the competition, especially since it's handicapped by an antiquated and non-optional 5-speed automatic.

The R/T trim does better with a 6-speed manual as the standard cog-swapper, although the 5-speed automatic still lies in wait, just asking to ruin everyone’s fun. If you need more convincing, manual-equipped R/Ts sport 376 horses with their 5.7-liter V8 and 410 lb-ft of torque. Clicking the automatic switcher will lose you 4 horses and 10 lb-ft as well as forcing inclusion of the Multi-Displacement System for increased fuel economy, because nothing says saving gas like a 4,000-pound V8 muscle car.

And for those who want to fully thumb their nose at the ecological movement, there’s the SRT8 trim, badged in 2011 with an extra set of numbers – 392. You’ll find them on the front fenders, signifying the cubic inches of the V8 Hemi found under the hood, bumped to its new rating after being bored and stroked to a full 6.4 liters. With an extra 45 hp and 50 lb-ft showing up 200 and 600 rpm earlier, the car certainly motivates with increased urgency. Yes, it’s faster. Dodge even claims to have widened the torque curve, with almost 100 more lb-ft available at just under 3,000 rpm. You’ll still have to choose between 6-speed manual and 5-speed automatic transmissions, but there are more changes for the Challenger in 2011.

First, suspension geometry has been revised with retuned shocks, bushings and dampers, although exactly what they’ve done isn’t being shouted from the rooftops. Couple those changes with a new heavy-duty hydraulic pump for the electro-hydraulic steering and you have a car that handles less like a canal barge, especially with the new, smaller, 3-spoke leather-wrapped steering wheel. These changes come standard with V8 Challengers, but those who prefer the V6 will have to click the Super Sport Group option to get the updates. The R/T can be further outfitted with the Super Track Pak, which will further upgrade brakes, suspension and steering as well as getting you larger 20-inch wheels.

Dodge claims braking improvements all around as well, although they’re being similarly mum about the specifics. Regardless, real-world testing has proven the improvement, with decreased pedal travel and stopping distance. Sharp-eyed enthusiasts will also notice the lower grille opening has been flipped upside down as opposed to previous years, a change Dodge claims will result in better cooling.

So it’s faster, more efficient, safer and it even handles better. It’s not the best in any category, but at least it’s improved. If a Challenger has always been on your mind, this is a great time to get one, the R/T providing the best combination of comfort, performance and affordability. Of course, when it loses 2011’s round of testing between the big three pony cars, 2012 might just bring along some more improvements.

What's your take on the 2011 Dodge Challenger?

Have you driven a 2011 Dodge Challenger?
Rank This Car

Inches Apart The Tires Should Be?

What is the recommended distance from cengter to center of the two front tires? The Back?

My Car Feels Like It Drifts Every Time, Is To The Point That Is Not Safe To...

when I speed up I loose control of the wheel and the car feels like is drifting even when Im not turning, I changed tires, did alignment and still doing the same thing.

so. I thought I had. bad head gasket. shop said heads are good but I have a bad. aluminum tubing. that's cozying my car over heat. and I'm wondering if that could truly be the issue

Can I Get A Vehicle Shipped To A Cargurus Near My Location?