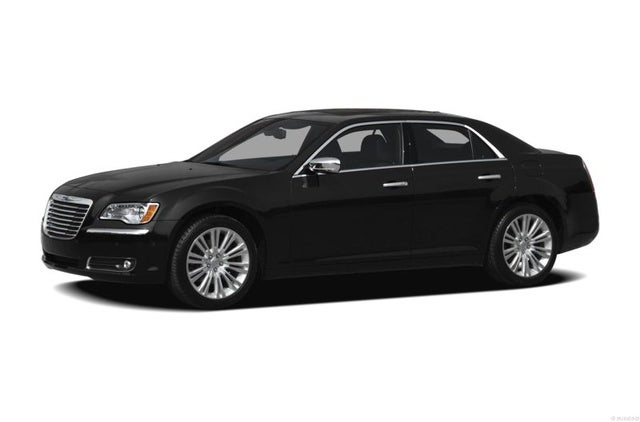 Numb steering and a lack of cargo room impede an otherwise solid entry in the 2011 Chrysler 300.

Chrysler hoped to make a dent in the “near-luxury” segment with the 300, but so far has failed to strike true. The current round of updates brings the 300 much closer to Chrysler’s goal, but as is it merely meets the standard set by competitors like the Taurus and the LaCrosse. At this point, it’s a reasonable alternative to any other entrant in the class, with a ride that will make you forget you’re driving a Chrysler.

There’s a lot to luxury. There are of course quality, precision and attention to detail. These are givens. But there’s also prestige, and that’s more esoteric. While putting a finger on what makes a commodity prestigious is more difficult than associating quality with Chrysler, there’s one thing that will always obviate prestige – ubiquity.

The Chrysler 300 debuted with a boxy, quirky 1930s style that set it apart from the rest of the full-size sedan crowd. Unfortunately, it didn’t last. Shoddy craftsmanship and a style that quickly became stale thanks partially to seeing it coming around every corner hurt the 300 early in its lifespan.

Now it’s time for a new 300, and Chrysler saw it coming. 2011 sees a major refresh in the way of styling, interior, suspension, drivetrain and overall comfort, enough to almost bring the 300 up to 2011. Unfortunately, it still doesn’t meet the luxury aspirations of the brand. 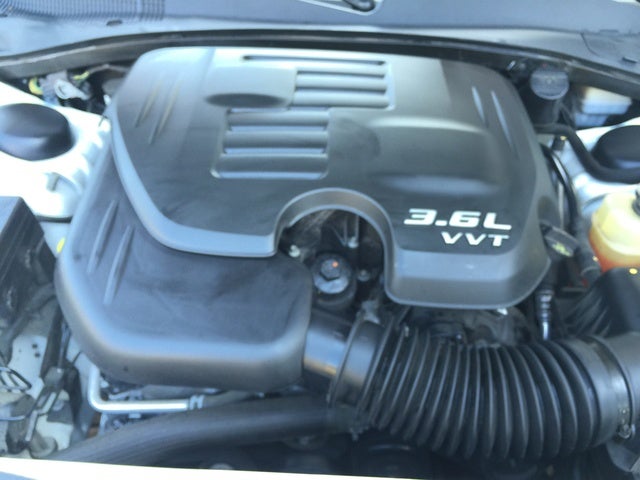 Previous incarnations of the 300 offered two anemic 6-cylinder engines, one more insulting than the other. This year a 292-hp, 3.6-liter V6 powers the 300, aided by 260 lb-ft of torque. In any other car this would be a formidable power delivery system to place under the hood, but here it’s hampered by the 300’s weight – nearly 4,000 pounds. It’s the Pentastar V6 we’ll be seeing in everything from the Town & Country to the Charger, utilizing variable valve timing in an all-aluminum design with E85 compatibility. It’s adequate for motivating the 300, and that says a lot. The old V6 offerings were weak enough to come just shy of making the V8 option mandatory.

Here the V8 is a true option, as it should be. While a 300 can be had for less than thirty grand, an AWD V8-equipped 300 C will push past the $40,000 mark. That’s a big jump just to make sure you can motivate adequately. You’ll recognize the 5.7-liter Hemi offered here, although it’s been massaged for 3 extra horses this year, for a total of 363. 394 lb-ft of torque back it up, although they don’t make the 300 jump off the line as forcefully as you might expect. It is equipped with the cylinder-deactivating Multi-Displacement System to improve efficiency, at least. The EPA rates it at 16/25 mpg, or 15/23 when used in an AWD-equipped 300. The V6 does a bit better with 18/27, although that drops with E85 use.

Another nod to efficiency is the active transfer case and disconnecting front axle used in the AWD setup. Chrysler claims a 5% increase in fuel economy thanks to its ability to power only the rear wheels and gives it partial credit for the only minor drop in efficiency with the AWD system. While an 8-speed automatic is rumored to be arriving soon, we’ll have to settle for the 5-speed in 2011 regardless of engine choice.

The 300 weighs nearly 2 tons - and handles like a 2-ton car. Soaking up bumps with finesse, it provides a comfortable ride that borders on but never achieves luxury. Roll and lean are present, as would be expected with a car this substantial, but are well mitigated and don’t get in the way of safety or overall comfort. 17- and 18-inch wheels work well to avoid any harshness with the base suspension, and the 19-inch units with the 300C shouldn’t make much of a difference. However, the sport suspension that comes with the optional 20-inch wheels brings things a bit too far to the firm side to really maintain the luxury image. Cushiness goes out the window.

The real disappointment here is the electric steering setup, which feels numb and disconnected, despite Chrysler’s assurances. 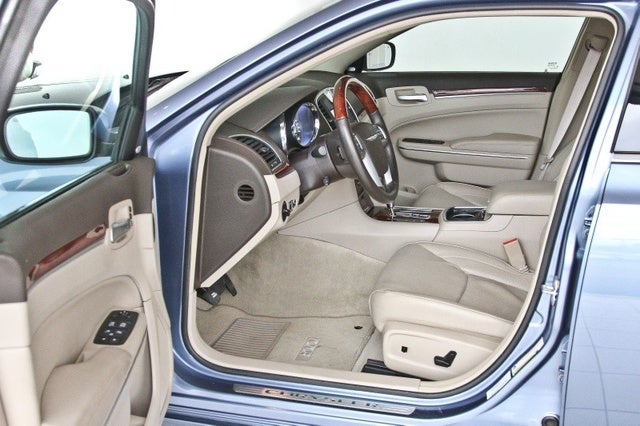 The 300's steering wheel is a winner, even if the steering itself leaves a lot to be desired. There’s been much talk about the updated steering wheel of the 300, although much of the praise has more to do with the atrocious 4-spoke it replaced. Still, it really is quite an improvement and feels as though it belongs in a car with a much higher pricetag. Unfortunately the same can’t be said for the rest of the interior.

Nearly everything here is an upgrade, with better switches, soft-touch surfaces, comfortable and supportive seats and an attention to detail you wouldn’t expect to find in a Chrysler. Sadly, this merely adds up to class-appropriate kit. The quality, level of detail and material all fit exactly where the 300 should be, but fail to meet any of the actual luxury brands. To be sure, there’s nothing wrong with that, and it’s good to see the car catching up to its competitors if not its aspirations.

The 8.4-inch touchscreen deserves special note as the largest standard screen available in the class, as well as an intuitive interface for all but a few controls. The optional Garmin-sourced navigation software is friendly as well and a big improvement over Chrysler’s previous attempts. Some have gone far enough to compare it to Ford’s SYNC system, but it’s simply not there yet.

Most noticeable is the silence you’ll experience when operating the 300. Extra-thick sound-insulating glass was used, as well as two composite underbody panels that are claimed to smooth airflow underneath the car as well as provide sound insulation. Increased manufacturing precision has also been noted as a source of sound isolation by Chrysler, with lower tolerances resulting in less squeaking and clunking and rattling. Whatever the recipe, the result is a much quieter 300. This is perhaps the high point of the whole refresh, so dramatic is the difference. Even the engines are quiet, with only the V6 providing a slight harsh growl under hard acceleration. 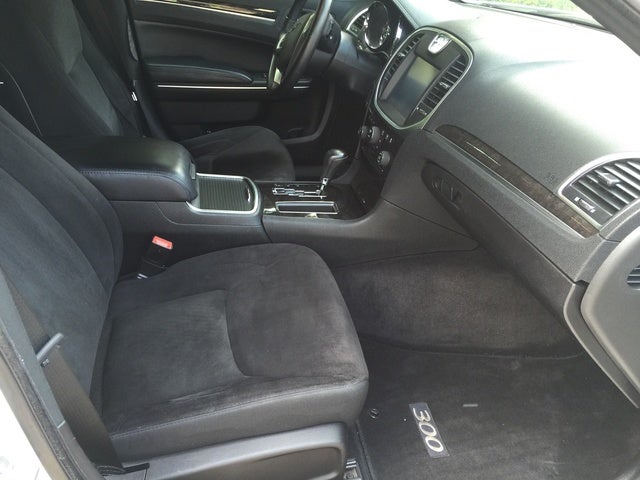 All 300 trims are fitted standard with dual front, front-side and curtain-side airbags as well as a driver's knee airbag. Traction and stability control are included as well, not to mention 4-wheel antilock discs with brake assist. The 300 C gets upgraded braking as well, while all get daytime running lights and front-seat active head restraints.

While the National Highway Traffic Safety Administration (NHTSA) has yet to release 2011 crash test results, the Insurance Institute for Highway Safety (IIHS) has awarded the 2011 Chrysler 300 a Top Safety Pick award – a first achievement for the car.

alan09 stop Bull S- - - ing around ang give me a true Imperial.Chrysler has always been a fine car what are you doing.i will take a well bilt Chrysler Over Cadillac price the same ,That's saying a lot I have owned 4 Cadillac,And its a beautiful car.But would still would rather have a true Chrysler V8.

TheHorror Sure Alan, FCA could really use another sub-brand. Stop your garbled ramblings and take a nap.

Users ranked 2011 Chrysler 300 against other cars which they drove/owned. Each ranking was based on 9 categories. Here is the summary of top rankings.

I got a oil change a week ago, but it still says “Change Oil Soon”. Also the coolant temp is always at 200-219 even when it’s 70 degrees outside and I just go around the block. I did put my heater...

Why Is My Engine Light On And Remote Start Not Working Correctly?

I have a 2011 Chrysler 300 just had a fuel pump replaced and now my remote start will start the car but shuts off at 30 seconds and the engine light is now on. Any ideas what may cause this or ho...

Fuel Nozzle Will Not Go In To Gas Tank

I have a 2011 300 and the silver flap in my gas door is "locked". The fuel nozzle will not push the flap open so I can't put gas in my car! Has this happened to anyone else?