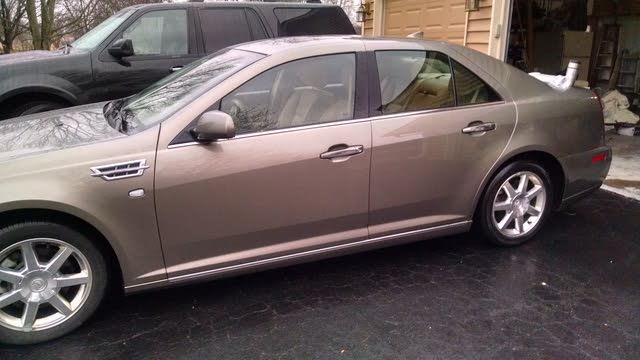 The 2011 Cadillac STS provides proof that changes keep coming in the Caddy world. While its looks have stayed much the same over the last few versions, a 3.6-liter V6 powers all trims of the STS now that the 4.6-liter V8 option has been discontinued.

The V6 puts out 302 horsepower and 272 lb-ft of torque, apparently close enough to the 320 horsepower of the V8 to ensure that more expensive and fuel-hungry option no longer makes sense for General Motors. A six-speed automatic transmission continues to be standard fare in the STS, which is available with rear-wheel or all-wheel drive. EPA estimates peg the STS at 18 mpg city/27 on the highway. The STS rides on 18-inch wheels.

Speculation runs rampant that GM has more and drastic changes in mind for the Cadillac line, too. The DTS and STS models, reports indicate, are on their way out.

For the moment, the 2011 Cadillac STS fills the role it has for several years, slotted between the highly regarded and smaller Cadillac CTS/CTS-V and the Cadillac DTS, the large, limousine-type rig often used for shuttling dignitaries and celebrities.

The STS handles its role quite nicely. The successor to Cadillac’s Seville – its name, in fact, stands for Seville Touring Sedan – the vehicle debuted in 2005 and still receives high marks from reviewers for its high-end performance.

They appreciate its power and the way it handles and rides, whether on the highway, back roads or negotiating city streets. It’s a fun and sporty car to drive, they note, but gives up little when it comes to comfort and luxury.

That said, the interior of the STS comes up a bit short in comparison shopping with others in its class. To be sure, it has its highlights in this department, including a high-quality sound system, but the experts point to its shortcomings as well. They take issue at times with the quality of materials in the cabin and are disappointed with the space allotted to backseat passengers.

Heated exterior mirrors for driver and passenger, keyless entry and remote start, privacy glass, leather seats and rear parking assist come standard in all trims, along with a three-month trial of Satellite radio. Stepping up the ladder in trims bumps the sound system to a Bose Surround Sound setup, heats the driver's and passenger seats, adds Bluetooth connectivity, and offers the option of a sunroof.

The 2011 Cadillac STS scores well in safety tests. Features include antilock brakes, traction control, a stability control system, front side airbags, curtain side airbags, foglamps, and a theft deterrent system. The STS also comes equipped with OnStar for a year.

Like its Caddy brothers and sisters, the 2011 STS carries an added perk. All new Caddies come with Cadillac Premium Care Maintenance. It’s a program that brings free required maintenance for the car’s first 50,000 miles or first four years of its life. Oil changes, tire rotations, engine and cabin filter replacements, and vehicle inspections are among the check-ups that will be covered.

GuruV918B My STS has nearly identical exterior size as my Pontiac Grand Prix, yet with considerably less rear leg room. The trunk is smaller than the Pontiac, too. But it's heavier and with 50% more horsepower and rear wheel drive, it's both fun to push the gas pedal yet has the same highway mileage. The thought of driving it in the snow scares the hell out of me, but in Arizona that is unnecessary. The tires cost me $900 to replace.

Have you driven a 2011 Cadillac STS?
Rank This Car

I need the rubber cover for a dial on a 2011 STS Cadillac? The dealership says it cannot be ordered., UGH