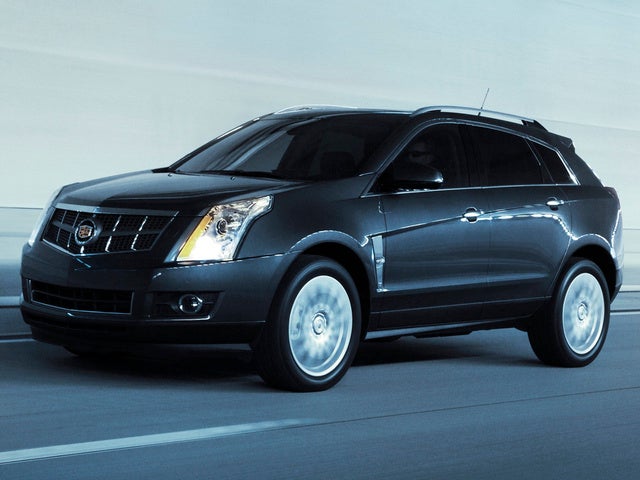 The 2011 Cadillac SRX should push many buyers' hot buttons with its aggressive good looks and luxurious interior.

Despite its considerable bulk the 2011 SRX is a bit tight inside, and its base V6 lacks low-end grunt.

All-new last year, the second-generation Cadillac SRX crossover continues to impress for 2011. In the SRX Cadillac skillfully melds good looks with European-style driving dynamics, creating a worthy competitor for the class leaders from Lexus, BMW, and Mercedes-Benz. Though the overall package is quite compelling, the 2011 SRX is slightly hampered by a lack of interior space and a weak base engine.

The 2011 SRX represents Cadillac's second generation of midsize luxury crossover SUVs. Riding on a modified version of General Motors' Theta architecture, the 2011 SRX is offered in both front-wheel-drive and all-wheel-drive versions. With its unit-body and independent suspension, the SRX rides and handles almost as well as the company's new sedans.

With a 110-inch wheelbase, the 2011 SRX fits squarely into the midsize crossover class. A full complement of features and a swanky, luxurious interior enable the SRX to do battle with established competitors like the Lexus RX. Two different V6 engines are offered, but the SRX's portly curb weight means that acceleration isn't exactly stellar.

The 2011 SRX is available in four trim levels. Though base SRX trims are chock full of value, the more luxurious variants carry rather ambitious pricetags. Even with its few handicaps, the 2011 SRX shows how much progress Cadillac has made in developing and producing world-class machinery. 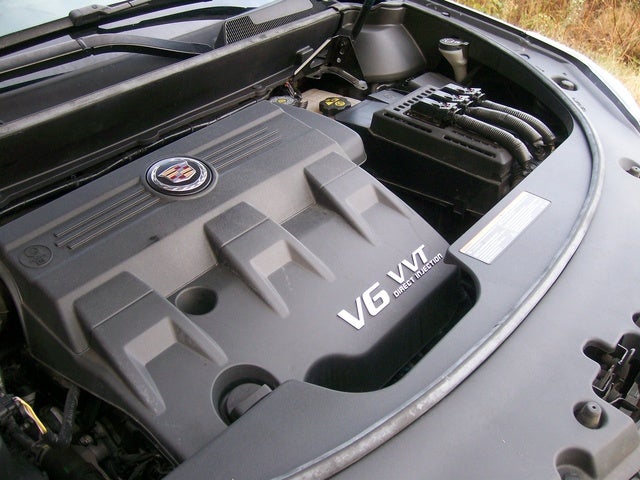 For 2011 Cadillac offers SRX buyers a choice between two advanced V6 engines. The base motor is the familiar "high-feature" six-cylinder that also sees duty in the CTS. This all-aluminum, direct-injection engine displaces 3.0-liters and makes 265 hp and 223 lb-ft of torque. Though smooth and refined, the 3.0-liter has to contend with more than two tons of mass. As such the SRX's acceleration is rather leisurely, and highway passing requires a firm stab of the gas pedal.

2011 SRXs equipped with the base V6 make use of GM's excellent 6T70 six-speed automatic transmission. This gearbox serves up smooth, well-timed shifts and contributes to the SRX's relatively efficient 25-mpg highway fuel economy rating. The turbocharged 2.8-liter V6 gets an AF40 six-speed automatic sourced from supplier Aisin-Warner. Though its firmer shifts are well-suited to the performance of the turbo motor, fuel mileage drops to 23 mpg on the highway and only 17 in the city.

The 2011 SRX's car-based platform was engineered to deliver confident road manners. The chassis features a four-wheel independent suspension that consists of struts up front and a multi-link arrangement in back. This setup results in predictable, if not overly sporting, handling with minimal body roll. Steering is quite crisp and features quick turn-in and pleasant weighting. Though serious off-roading is out of the question, the SRX offers enough ground clearance to deal with dirt roads and snowy conditions.

On smooth surfaces the SRX rides very well and offers a commendably quiet interior. On broken pavement the ride can be a bit choppy, but the optional adaptive damping system (available only with the turbo engine) improves matters considerably. Another neat feature is the electronic limited-slip differential offered on all-wheel-drive trims. This advanced feature allows torque to be distributed side-to-side at the rear wheels, improving traction in tricky conditions. 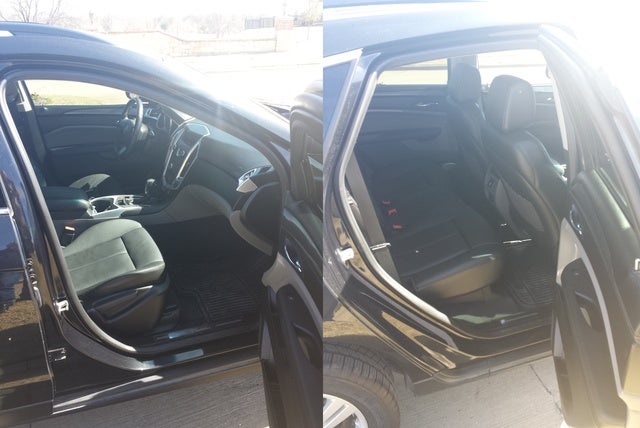 With the 2011 SRX Cadillac has raised the bar for interior design. The geometric dashboard design is both eye-catching and functional, with most instruments located within the driver's line of sight. The center stack features well-placed controls for the stereo and HVAC system, though the location of the seat adjustment switches is an ergonomic oversight. Materials quality is very good (though not quite to Lexus standards), and everything fits together well with no squeaks or rattles. Base SRXs make do with fairly convincing leatherette upholstery, while up-market trims get a soft, fragrant variety of real cowhide.

For a car-based crossover the 2011 SRX offers a tall driving position. Despite the high vantage point, the view out is somewhat compromised by chunky pillars and a high beltline. The driving position is very good, and the seats are comfortable and supportive. Plenty of head, leg, and elbow room is available for front passengers, but rear seat occupants get shorted a bit on headroom courtesy of the swooping roof line. The cargo compartment offers a generous 61 cubic feet of space and is impressively finished with thick carpeting and a variety of cargo management aids. Some trim levels offer the convenience of a power tailgate that makes loading luggage or groceries a snap.

Given its status as a family vehicle, Cadillac has equipped the 2011 SRX with a full complement of standard safety features. Included in all trims are front, side, and curtain airbags, along with antilock brakes and stability control. Also included are standard keyless entry with alarm and GM's excellent OnStar automatic crash response system. The Insurance Institute for Highway Safety (IIHS) has rated the SRX as a Top Safety Pick as a result of its good showing in their rigorous offset crash test.

Owners of the second-generation Cadillac SRX are particularly impressed with the high style the SUV offers. In an increasingly crowded field, several owners mentioned the SRX's avant-garde styling as a factor in their purchase decision. The quiet, refined interior of the SRX received much praise for its comfort and ease of use. With respect to performance, most buyers were pleased with the SRX's ride and handling, but found acceleration (especially with the base motor) lackluster. Also drawing criticism were the SRX's mediocre fuel-economy numbers.

Guru9TWKZQ GMotors car dealership in Waterford Works, was the best!!!!! They get 5/5!!

Users ranked 2011 Cadillac SRX against other cars which they drove/owned. Each ranking was based on 9 categories. Here is the summary of top rankings.

Have you driven a 2011 Cadillac SRX?
Rank This Car

My 2011 Cadillac SRX was working fine yesterday when I got back in it to start it would not start it doesn't click it doesn't do anything, until now it hasn't had any problems starting there was n...

Suddenly had to press brakes almost all the way to the floor to slow the car down. The car skidded some before could let the brakes off. The next day the brakes worked normal. What is going on wi...

What Is Causing My Brakes To Suddenly Lose Pressure When I Hit A Bump Or Ho...

Why are the brakes on my 2011 SRX Cadillac losing pressure. It doesn't happen all the time but is very dangerous when it does. I have been on the expressway at 70 to 80 miles an hour or on city stre...

Remote Starter Not Working Check Engine Light Is On

Why Doesn't My Key Fob Work

I replaced the battery in my keyfob And when I reset the key fob now the key fob does absolutely nothing no locks no trunk no alarm definitely doesn't start I can't stop my car now What do I do he...