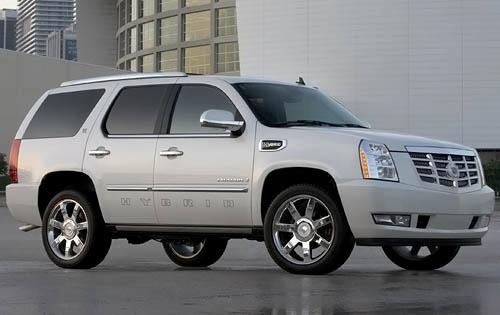 With the slumping economy and erratic gas prices, the full-size V8-powered SUV is not too long for this world. And though your favorite hip-hop artist may disagree, such is the prevailing sentiment among a growing number of car buyers who continue to abandon these lumbering giants for cheap and versatile crossovers. Yet, if this is indeed the end of an era, the 2011 Cadillac Escalade represents a truly grand finale.

Love it or hate it, the Escalade’s latest iteration is the epitome of excess. Towering well over 6 feet, its self-aggrandizing size and posture are sure to impress nearby drivers and possibly rob them of natural light. This massive footprint also makes for class-leading passenger and cargo space, measuring almost 109 cubic feet. Of course such accommodation comes at the expense of maneuverability. So even with the standard rear-view camera, I would recommend doing some rubbernecking when reversing.

The 2011 Escalade's exterior styling remains virtually identical to last year’s model. And why mess with a good thing? The sharp, rectangular queues and the all-familiar crest are unmistakably Cadillac – esthetically consistent with rest of the brand’s product range. Meanwhile, the top-end Platinum collection adds more than a shiny badge. Some of the upgrades include 22-inch multi-spoke aluminum wheels and a neat cluster of IntelliBeam LEDs seen under each of the headlamp covers.

Inside, the Escalade is just as noble as it is on the surface. The cabin is lined with graceful wood-like panels, and the leather is baby-smooth. The instrument panel is highly functional, but a bit passé. The rest of the controls are part of the same simple and practical layout, where not a hint of avant-garde is allowed to get in the way of class and utility.

Of course not all is perfect in this leather-clad paradise. In an honest attempt to add contrast between the Escalade’s trims, GM has made a real mess of things. The elaborate taxonomy of model levels, "portfolios" and "collections," is a branding nightmare that only hinders the Escalade experience. The midrange Luxury and Premium editions obfuscate what is essentially an impressive but simple list of optional equipment. Highlights include a heated steering wheel, Magnetic Ride Control suspension, fold-and-tumble second-row seats, a rear DVD entertainment system with headphones and MP3 jacks, heated and cooled cupholders, and auto-retractable door steps.

All this hi tech-galore comes under the umbrella of four separate models, all available with rear-wheel (RWD) or all-wheel drive (AWD). It includes the plain Escalade (previewed herein and including a Hybrid trim), extended-cab ESV, and the EXT variant – an Escalade pick-up to be covered separately.

With the exception of the Hybrid version, all 2011 Escalades are powered by the same 6.2-liter eight-cylinder engine – the largest in its class – producing a capable 403 hp. This means that, despite its size, this truck will not feel sluggish in any power band. Its ride is also assured and body roll quite marginal for the segment. However, even with the benefit of the optional Magnetic Ride Control suspension, at no time will the Escalade’s 7,000 pounds feel sporty.

Of course the most unique Escalade feature lies under the hood and is called Active Fuel Management. Pioneered by GM, this powertrain system – also known as Displacement on Demand – enables the engine to run on fewer cylinders depending on driving conditions. Deactivating cylinders helps boost efficiency and reduce fuel consumption. Still, after being shelved for years, Active Fuel Management finally made it to production in 2005 only to show a meager 6 percent average improvement in fuel economy. And while this would make real difference in smaller cars, this technology is so far limited strictly to V6 and V8 engines. What does it mean for the 2011 Escalade? More of the same big-SUV mileage numbers, EPA estimated at 13/18 mpg.

In the end, despite its class-leading status, the 2011 Cadillac Escalade may be the last of the luxury road hogs. Oversized, overpriced, and overcompensating, it holds little appeal among cheaper, more frugal SUVs and might therefore find itself phased out of production.

What's your take on the 2011 Cadillac Escalade?

Users ranked 2011 Cadillac Escalade against other cars which they drove/owned. Each ranking was based on 9 categories. Here is the summary of top rankings.

Have you driven a 2011 Cadillac Escalade?
Rank This Car

i have been really interested in this 2011 escalade that's for sale, but 4x4 is kinda a must where i live. so my question is are all escalades 4x4? i heard that they are all AWD? before getting to att...

my electric running boards on both left and right opens but does go back up, it only does when I assist it with my foot. this happens when it gets cold. is there a easy fix for this

I need to find details for a car which is no longer available.

2011 escalde luxury Is this a good deal