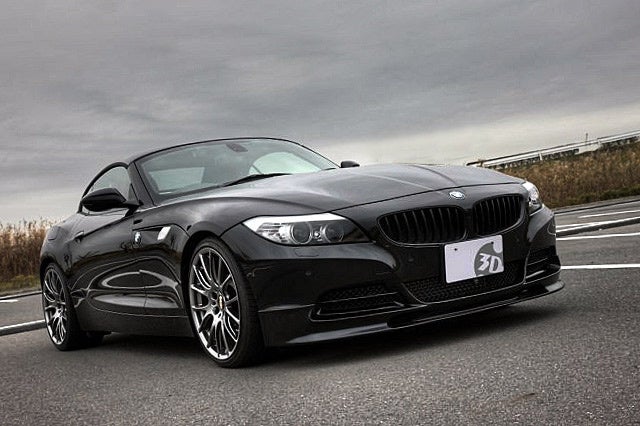 It’s a hell of a burden building the Ultimate Driving Machine. When you’re wearing that badge, good is simply never good enough, and it was perhaps with this in mind that BMW introduced a new trim into its celebrated Z4 lineup – the sDrive35is.

BWM uses this laborious naming system to designate the three engines offered in the Z4 stable, with sDrive30i and sDrive35i rounding out the group. Since even the base powerplant - an inline 3.0-liter six-cylinder engine that produces 255 hp and 220 lb-ft of torque – is quite a performer, the addition of forced induction in the remaining trims can only mean more fun in a compact package.

And that package is a rear-wheel-drive, two-door, hardtop convertible originally designed by a Dane and built by Germans in the American South. Since the second generation, when this Deutsche drop-top received a hard shell for the roof, the Z4 has been assembled at the Resenburg, Germany, plant, but originally the Z4 was built down in Spartanburg, South Carolina. The move back home was fitting for the Z4, in the spirit of keeping your enemies, namely the Porsche Boxster, Mercedes SLK, and Audi TT, close.

So how has BMW decided to slay these enemies? First, it turbocharged the 3.0-liter for 300 hp and lb-ft of torque and called it the sDrive35i. Even more important than the power figures are when they show up, 5,800 and 1,400 rpm, respectively. For torque, that’s 1,200 rpm quicker than baby brother, and that makes a much bigger difference in seat-of-your-pants performance than the extra horsepower and torque would alone.

But when you have giants to slay, and the competition are surely that, it never hurts to bring a big sword. In this case, BMW brought two in the form of the twin-turbocharged 3.0-liter of the sDrive35is. With better breathing, a new exhaust, and a higher boost profile, the 35is offers 335 hp and 332 lb-ft of torque, with an extra 37 lb-ft just waiting to be accessed via the overboost function. That will rocket her to 60 mph in a claimed 4.7 seconds, already a half-second faster than the Boxster S, but testers have been finding real-world figures to be closer to 4.5 seconds.

But this is all concentrating on the wrong things. Sure, the engines are all superb, regardless of forced induction or natural aspiration. The real strong suit of any BMW should always be handling. Accordingly, the sDrive35is gets as standard what the other Z4 trims have to pay for, the M Sport Package. This drops the suspension almost a half-inch and adds adaptive suspension dampers and stiffer springs, 18-inch alloys, front and rear air dams with rear diffuser, a 155-mph top speed, and M features throughout the interior. While this means lots of M badging all around, it also means you’ll get 10-way adjustable sport seats with power bolster adjustment and the M steering wheel that fits larger hands so very well. The sDrive35is also gets unique programming for both the electronic steering and the standard, seven-speed double-clutch transmission, which itself utilizes a dual-mass flywheel for added durability. While the sDrive30i gets to choose between a six-speed manual or automatic, the 35i gets the choice of the double-clutch seven-speed instead of the six-speed automatic. And all Z4s get Driving Dynamics Control, which allows for unique shifting, throttle, and suspension profiles, marked as Normal, Sport, and Sport+.

But it’s more than just performance that makes the Z4 a winner in the roadster segment - it’s the perceived practicality of the vehicle that really cements its station. In 20 seconds, you can go from a convertible to a hardtop, and with its large rear quarter windows, the Z4 manages to avoid the blind spots that plague so many convertibles. It even offers 8 cubic feet of cargo space in the trunk and a well deep enough to hold a set of golf clubs. The interior itself betrays more of a touring car ambiance rather than straight sports car, with upscale materials and wood trim throughout. Some testers have noticed an issue with the audio display when wearing polarized glasses, however, as anything but a direct view completely washes out the screen.

Still, that’s a small complaint for such a venerated vehicle. BMW owners are a picky group, and as likely to turn on their own manufacturer as they are a competitor, but there’s really not much to complain about here. Yes, the sticker price isn’t exactly limbo-low, but the ROI is demonstrable in performance, quality, technology, and luxury. The new sDrive35is only further rounds out the total model profile and acts as a worthy supplicant to the short-lived Z4 M. Topless giants of Mercedes, Audi, and yes, even Porsche, beware, for the giant-killer awaits.

Ripsaw Dual Clutch gearbox automatic shifts up or down no power loss, motorcycles shift like that XD that's one plus. Really sexy front end and body sure to please the eyes of any woman. When modified into a widebody looks like a straight up race car that a supercar owner would admire. On a track when its modified for racing its so Beast. Interior is pretty nice very comfy seats you feel like your sitting on the street because the cars so low but that's just gonna up performance and the expierence from driving this machine. Which is adrenaline packed if that's something you like. Tires are cheap even the best ones are not expensive for this car.Lots of tread patterns to choose from. Washing this car would be painless how nice would it be to wash your roof without stretching or getting on your tippy toes. This car is so small and low detailing it would probably only take 20minutes maybe less. All in all I would buy this car if you can find it because no other bmw has Brembo brakes any longer. The 2011 i35is m package did though even had a bigger rim size. And if your looking for a car that you can sink your modifying fangs into this is the one. This style car ,roadsters are dwindling in production. And if there still making em your can pay so much more for this style body then you would for this model. This car has everything imo. If handling, speed, and appearance are important to you. XDXDXD

How Can I Leave A Dealer Review

2011 Z4 Manual Transmission, How To Display The Gear Changes ?

I want to see the gear changes in the display. I had it before but it looks like I did something and now I can’t put it back. Can someone help me with this?

Why are we not receiving any response from private sellers as to location and time for a test drive?

When I take the Z to the car wash is there an override so the car can be put in gear without having the seatbelt on. Have to explain to the carwash employee that the seat belt has to be on in order ...

47 views with no answers yet

How Do I Remove Sunscreen Lotion From My Z4 Leather Seats?

75 views with no answers yet