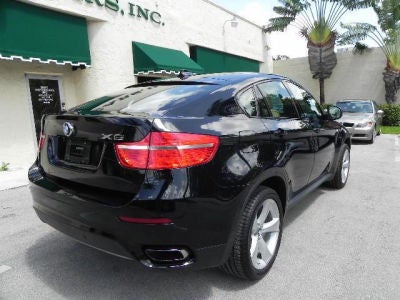 The 2011 BMW X6 answers the question, "What would happen if you tried to turn a two-door luxury coupe into a crossover SUV?" If that doesn't confuse you, the BMW X6 in its various guises could be worth considering.

Actually, the German automaker calls the X6 a "sports activity coupe" which seems to make sense given the fact that the roofline slopes quickly to the rear. In fact, outside of its raised suspension and somewhat larger size, it could be confused for a four-door BMW sedan or a stretched 6 Series.

A 2011 BMW X6 comes in four all-wheel drive varieties: the xDrive35i, the xDrive50i, the Hybrid, and the X6 M. The xDrive35i and the xDrive50i differ chiefly in engine size, the 35i featuring a turbocharged six-cylinder making 300 horsepower and the 50i having a twin-turbocharged V8 offering 400 hp, along with 450 lb-ft of torque.

All trims of the BMW X6 come with a new eight-speed automatic transmission that replaces the old six-speed, allowing for better control of the SUV's power band. With the xDrive all-wheel-drive system, power can be transmitted fully to the front or rear wheels as necessary and shifted between the left and right rear wheels as well. Drivers also benefit from an adaptive suspension system that firms up the ride for more sporty driving.

On the interior, the 2011 BMW X6 resembles its larger cousin, the X5, although its four seats offer more support, and padding on the center console will protect one's legs during hard turning. A large rear center console eliminates the rear center seat, and the sharply descending rear roofline means that the back seats aren't adjustable. Expect 25 cubic feet of storage with all four seats up and 60 with the rear seats folded.

Where the BMW X6 really excels is in handling and acceleration. Even the base xDrive35i trim can get from 0-60 mph in just over 6 seconds while offering a 23 mpg combined mileage rating. Add to that its adaptive all-wheel-drive system and many reviewers marvel at the car-like ability of the X6 that belies its size and heft. The xDrive50i goes 0-60 in 5.2 seconds and has a combined city/highway mileage rating of 20 mpg.

The X6 M ramps things up a notch with a twin-turbocharged V8 engine with 555 hp and 500 lb-ft of torque. That shaves 1.5 seconds off its 0-60 time. It also gets a tuned suspension that firms up the ride and lowers it as well. It's easily visible as a sports-minded trim by its enlarged air intakes, front fender vents, and quad tailpipes, along with special 20-inch wheels. Combined fuel mileage averages 17 mpg.

The Hybrid manages to boost fuel economy to 18 mpg combined while still offering 40 more horsepower than the xDrive50i, for a total of 480. That's in part because its twin-turbo V8 is mated to two electric motors, enabling it to get from 0-60 mph in 5.4 seconds, while using the electric motors only up to 37 mph. The batteries, located underneath the cargo area, take advantage of the X6's high waistline so that the already cramped trunk isn't further compromised.

Whichever option buyers consider, the 2011 BMW X6 offers a lot of power in a package that looks sleek but very distinctive. For those who need only four seats, it could be an interesting alternative to other crossovers that offer more cargo capacity but less road feel and fewer grins on twisting roads.

Users ranked 2011 BMW X6 against other cars which they drove/owned. Each ranking was based on 9 categories. Here is the summary of top rankings.

Is it normal for exhaust to come out of only one exhaust while idling!

I Want To Rate 5 Dealerships On Your Cite!

I've had 5 bad experiences at dealerships here on your cite.

Why It Is So Special(X6)

It's A Bmw X6 A Good And Reliable Car?

It's a bmw x6 a good and reliable car or give a lot mechanical trouble?