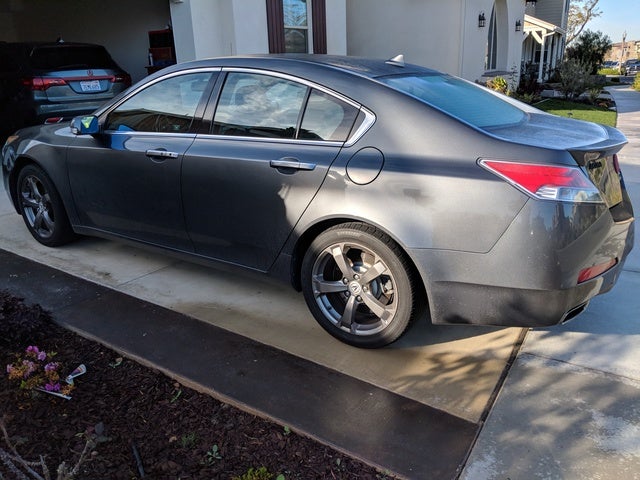 The problem with the 2011 Acura TL is that if you don't think your car's grille should look like a superhero's belt buckle, you're likely to miss out on a stellar midsize sedan with a glut of features and a strong engine.

The base V6 offers 280 horsepower and an 18/26 mpg city/highway rating. If you opt for the SH-AWD (Super Handling All-Wheel Drive) package, you get a 3.7-liter V6 with 305 horsepower on tap and 273 lb-ft of torque, mated to an advanced all-wheel-drive system that modulates power to each wheel. The larger engine helps to offset the power being split among all four wheels, rather than just two in the front-wheel-drive base TL.

The 2011 Acura TL is seen by some reviewers as two separate trims depending on whether prospective buyers opt for the front-wheel drive base version or the SH-AWD trim. It's perhaps telling that while both come equipped with a five-speed automatic to start, the SH-AWD is also available with a six-speed manual transmission for those interested in rowing their own gears.

Focusing on the handling of the SH-AWD, reviewers argue that the computerized system provides a stronger steering feel and control because of the ability to shunt engine power where it's needed in cornering. The base TL is no less comfortable thanks to a good suspension, but some say the steering feel can be lacking.

Inside, all models get a 6-CD changer, inputs for MP3 players, and USB connectivity for audio options for the five occupants, along with a leather-trimmed interior and heated front seats. Some reviewers have remarked that while the design of the interior as a whole is on par with European sports sedans like the Audi A4 and the BMW 3 Series, the center stack of the 2011 Acura TL can be somewhat confusing, with a center control knob and a surfeit of buttons alongside.

The driver gets power lumbar support in the seat and 10-way adjustment, and the front passenger gets a second set of climate controls. Safety features include side impact and side curtain airbags that combine with active head restraints for the front seat. 2011 Acura TLs come standard with ABS and electronic brakeforce distribution and brake assist, as well as an electronic safety system.

For prospective buyers looking for a bit more on the interior, the Technology package available for both the base TL trim and the SH-AWD offers keyless access, a navigation system with voice control, and an upgraded audio system with 410 watts. The leather interior is also improved, along with a rear spoiler and a rear-view parking camera.

Reviewers have noted that the 2011 Acura TL is a stellar car for those looking for a midsize luxury sedan with a comfortable rear passenger area, offering enough headroom and legroom for taller passengers as well as good build quality and crash-test scores that have made it one of the top choices of the Insurance Institute for Highway Safety. If you can get past the bird nose, it's a worthy competitor in the market.

Users ranked 2011 Acura TL against other cars which they drove/owned. Each ranking was based on 9 categories. Here is the summary of top rankings.

Add Of My Car

2011 Acura TL Won't Start, Nothing Turns On, No Lights, Nothing?