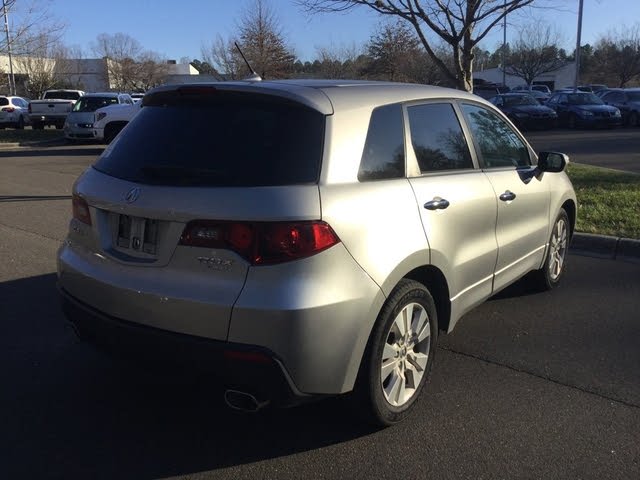 Superb handling, turbocharged performance, lots of gizmos and goodies, plenty of cabin room, and a livable sticker price make the 2011 Acura RDX look like a bargain.

An unforgiving ride, tepid styling, downright awful mileage for a four-banger, and some significant turbo-lag conspire to tarnish the 2011 RDX crossover’s image a bit.

The luxury-oriented 2011 Acura RDX doesn’t quite make it to the level of most of its contemporaries. Lacking a V6 engine and burdened by a number of low-class touches inside and out, this compact ute might seem like a bargain, but it can’t approach the competition for elegance, performance, and refinement.

Like a cookie-cutter McMansion with Walmart fixtures, the 2011 Acura RDX pretends luxury, but is a commoner at heart. Comparatively inexpensive, loaded with techno-gizmos, safety-minded, and available with Super Handling All-Wheel Drive (SH-AWD), this compact, luxury-oriented, five-passenger crossover SUV remains plagued with low-class touches. Among the areas of concern are an indecently stiff suspension, tepid cabin materials, and a few issues with the standard turbocharged inline four-cylinder engine (I4). While a sporty drive and reasonable sticker price (starting at $32,600 MSRP) are nice, one expects more out of an Acura, and this little ute-wannabe is the little engine that couldn’t.

Virtually unchanged from 2010, the 2011 RDX comes in a single Base trim level, with available all-wheel drive and a Tech Package dividing this Base trim into a number of sub-trims. Despite its shortcomings, this little crossover, now in its fifth year of production, boasts a tolerably roomy cabin and 61 cubic feet of cargo space with the rear seats folded. It also sports impressive crash-test scores and the most nimble handling in its class, especially when the standard front-wheel drivetrain (FWD) is replaced with Acura’s available SH-AWD system. Alas, meager towing ability and no off-road prowess make this little ute more wagon than dragon.

Competition in the upscale CUV market is fierce. Volvo’s XC60, Audi’s Q5, BMW’s X3, and Mercedes-Benz’s GLK all offer, besides V6 power, an equal or higher level of refinement and luxury than the RDX, with, of course, a significantly higher pricetag. However, entry-level luxury is luxury nonetheless, and Acura, as demonstrated by its popular MDX, can certainly do luxurious... just not so much with the RDX.

The only drivetrain available for the 2011 RDX is a turbocharged I4 and five-speed auto-manual transmission. This combo puts out a fairly respectable 240 hp at 6,000 rpm and 260 lb-ft of torque at 4,500 rpm, but it’s good for only 1,500 pounds of towing power. Gas mileage, despite variable valve timing, remains at a tepid 19/24 mpg in the FWD Base and an even less impressive 17/27 in the SH-AWD sub-trims.

Opinion seems divided among reviewers as to the performance of the RDX’s turbocharged I4. Many reviewers claim a disturbing turbo-lag seriously detracts from the four-banger’s giddyup, while others find acceleration to be better than average due to a lighter weight load and, of course, the forced aspiration of the turbo. In testing from 0-60, the RDX Base SH-AWD garnered 6.8 seconds, while the FWD RDX did the distance in 6.9 seconds. Some reviewers note a tendency toward turbo whine during heavy acceleration, as well as a bit of racket even at idle. Then there’s that pesky fuel-efficiency thing, which bugs virtually all reviewers. Many also bemoan the turbo I4’s demand for premium gas as adding insult to injury.

The 2011 RDX gets standard 18-inch alloy wheels and all-season tires. This fancy rubber complements a four-wheel independent suspension with MacPherson front struts, front and rear stabilizer bars, and a multi-link rear suspension. Added to all this is Acura’s highly touted SH-AWD system, which uses weight-distribution sensing and torque management to the rear wheels to provide extra grip and steering response in tight corners when on dry pavement. The regular AWD system, meanwhile, performs its usual duties on slick roads to help keep the RDX safely on the straight and narrow. Furthermore, brakes on the 2011 RDX are described by most reviewers as potent and true, though some pedal softness was noted in a few reviews.

A too-firm suspension results in occupants feeling far more of the road texture than they ought to, according to virtually all reviewers. A couple of reviews mention some skitter and jitter on irregular pavement, not what is usually expected in a self-described luxury crossover. Steering is noted by several reviewers to be a tad over-friendly on the highway, while low-speed turns require far more effort than usual. Despite some noticeable body lean in tight cornering, reviewers are, overall, quite impressed with this smallish ute’s fun factor, and laud the SH-AWD's center-mounted front and rear limited-slip differentials as major contributors to the RDX’s driving kick.

The available Technology Package, with voice-activated DVD navigation, 10-speaker surround-sound, AcuraLink communications, and 410 watts of audio power, turns both the Base and SH-AWD into separate sub-trims. Accessories, as Honda describes many of its stand-alone options, include 19-inch sparkle silver or chrome-look wheels, all-weather floor mats, cabin trim upgrades, and mud guards.

Though most reviews find the RDX’s gauges refreshingly large and distinct and all controls to be reasonably handy, some buttons are noted to be too small, and the available navigation screen is described as difficult to see in daylight. There are far too many hard plastic surfaces, according to a number of reviews, and despite the fact that most are shaped and textured, most reviewers agree that such low-end materials shouldn’t be so plentiful in what’s touted as a high-end crossover. Seat comfort, on the other hand, as well as cabin storage and layout are lauded as top-notch by virtually all reviewers.

The National Highway Traffic Safety Administration (NHTSA) is in the process of upgrading its test procedures and criteria for 2011 vehicles, but gave the mirror-image 2010 RDX five stars in front and side impact testing and four stars in rollover tests. The Insurance Institute for Highway Safety (IIHS), meanwhile, gives the 2011 RDX its highest rating of Good in front- and side-impact testing, while declining to test for roof strength.

As expected, owners of the 2011 RDX feel its gas mileage could be substantially improved, as could its dependence on premium gas. Turbo-lag and a jolting ride quality land high on the list of owner gripes as well, while the funky-looking grille has been unfavorably compared, by a number of owners, with a certain barnyard animal.

On the positive side, owners laud the RDX’s sporty handling and abundance of standard high-tech gizmos and gadgets. Many owners say they can live with a bit of turbo lag to get the eventual acceleration that the turbo provides. Additionally, owners are quite happy with the reliability and value they receive with this cute ute, much of which results from its much appreciated cabin room and storage as well as its nearly flawless safety scores.

Users ranked 2011 Acura RDX against other cars which they drove/owned. Each ranking was based on 9 categories. Here is the summary of top rankings.

Have you driven a 2011 Acura RDX?
Rank This Car

Can I Trade By Car For One On Your Site?

I found a car I like on cargurus but want to trade mine in. Is that possible?

Hello, I have a 2011 Acura RDX and there was a rattling noise under my car. I took a look and a family member basically ripped off what appears to be a heat shield. I am attaching a picture, because...

I have a car to sell

Anyone Know If Rdx 2011 Automatic Will Have Better Gas Milage Than 2010?