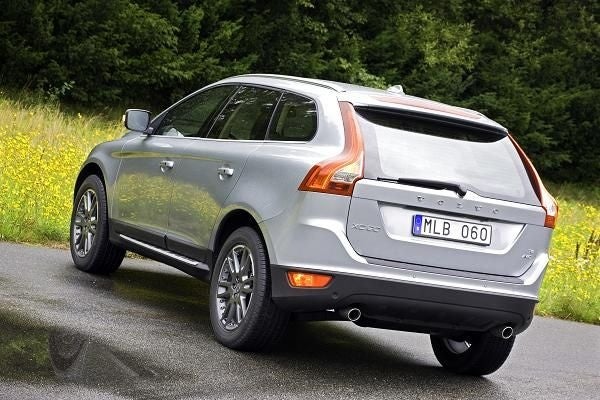 On sale in Europe since 2008, the Volvo XC60 will come to the U.S. later this year as a 2010 model. This crossover SUV is Volvo’s first foray into the compact SUV market and marks another first as well, this time for the world - the first vehicle to come standard with a low-speed accident-avoidance system, Volvo’s City Safety system. The XC60 seats five and comes in a single trim level, T6, which comes standard with Haldex Traction AWD, a 3.0-liter inline six-cylinder turbocharged engine, and a six-speed automatic transmission.

Built on a modified version of the Y20 platform, the XC60 shares many elements with the S20, including the engine and the AWD system. Test drives have been very positive already, with particular praise for the suspension, which provides a very car-like ride, and a selective input system for the steering, which allows the driver to choose between three settings.

Standard safety features are in line with the Volvo tradition, including dual front and front side airbags, curtain side airbags, antilock four-wheel disc brakes with brake assist, and the City Safety radar-controlled braking system, an antiskid system with rollover sensor, hill-descent control, front-seat active head restraints, a tire-pressure monitor and daytime running lights. The City Safety system automatically engages the braking system at low speeds when a collision is imminent and represents yet another safety first for Volvo.

Some criticism has been heard regarding interior space, especially for taller occupants, who may find a lack of headroom in the front and legroom in the rear, as well as for some counter-intuitive control placement.

sarasotacar Love this SUV 2010 XC 60 T 6 AWD , I can not find one thing I don't love about this Volvo . I plan on being the guy with 10000000 miles since I would not get rid of this car . 4400 pounds of pure safety and seats that are so comfortable . I use regular gas without any issues and get 26 MPH on the highway . This is a solid machine that flies with the V 6 . Thank you

Over the last month randomly I would get a message "replace the battery in the key fob". I had not yet done that and yesterday I came out for my lunchbreak from work and the car would not start. I...

Can Contamination Be Caused By Hose Replacement

Had power steering hose replaced at a shop. Apparently pump failed while there. Took it to a second shop (where pump was under the second shop’s warranty), and they said metal debris got in the sy...

I have a 2010 Volvo XC 60. It has always ran well. I have always taken it in for oil changes. The check engine light has been coming on off for about a year. About a year ago all of the Chargers e...

I just went in for an oil change service appointment and brake pad change, and the next day noticed a loud squealing noise from under the hood. After some research, I believe I've narrowed the pr...