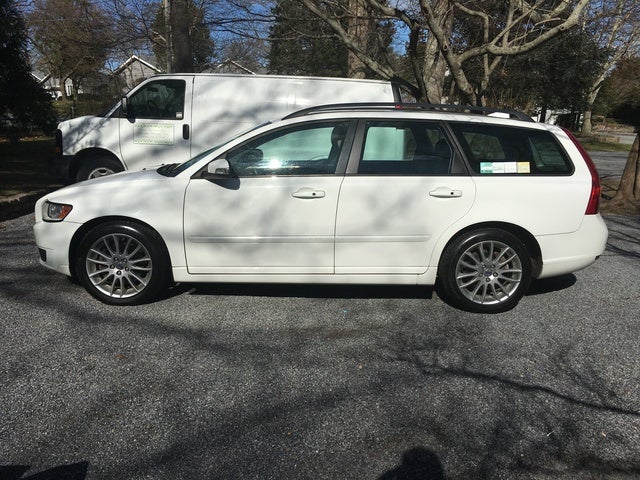 Essentially a sedan-turned-wagon, the four-door, five-passenger 2010 Volvo V50 shares the same chassis and design features as its S40 kinsman, with the added versatility of a 63-cubic-foot cargo area. Available in two trims, the base 2.4i and all-wheel-drive (AWD) T5 R-Design, the V50 offers versatile, family-friendly transportation with a reputation for safety and quality. How much? Well, that’s a whole other matter, especially with the higher trim. However, Euro-styling, a peppy turbocharged engine, and semi-sporty handling give this wagon a certain je ne sais quoi, thus keeping it in tune with the even pricier Audi A4 Avant, BMW 328i xDrive, and Saab 9-3 SportCombi... and Volvo has that safety thing going, too.

Powering the 2010 V50 2.4i is, as its moniker implies, a 2.4-liter inline five-cylinder (I5) engine that puts out 168 hp and 170 lb-ft of torque when managed by the standard five-speed automatic transmission. EPA-estimated mileage is a respectable 20/31 mpg. Volvo’s T5 R-Design trim gets a turbocharged 2.5-liter I5 that combines with a standard six-speed manual transmission to pound down 227 hp and 236 lb-ft of torque. The T5 R-Design is also available with the five-speed automatic, which will get 19/27, while the six-speed stick gets 20/26. Alas, Volvo recommends premium unleaded with both engines.

Options for the V50 include a DVD navigation system, heated front seats, and the Preferred Package with power moonroof, power-adjustable passenger seat, leather upholstery, and keyless entry/drive. Trim-specific options include satellite radio and a wood-trimmed dash for the 2.4i, as well as a 12-speaker Dynaudio surround-sound audio system for the T5 R-Design.

Based on owner feedback for the 2009 V50, there are tons of kudos for this sharp wagon, as well as a few glitches that Volvo could investigate. First and foremost among owner complaints is the noticeable road and wind noise permeating an otherwise comfortable and ergonomically pleasing cabin. Lack of pep in the 2.4-liter naturally aspirated I5 is mentioned by some owners as a problem, as is the cramped rear bench seat. Thick front roof pillars bother more than a few owners of the ’09 V50, as do tepid mileage figures for the turbocharged I5 (though Volvo claims both engines get better gas mileage this model year). Finally, several owners comment that this somewhat average wagon is offered at a premium price for its top-shelf T5 R-Design trim. Otherwise, the V50 is thought to be a stylish, comfortable, nimble, safe, and well-mannered example of European automotive excellence.