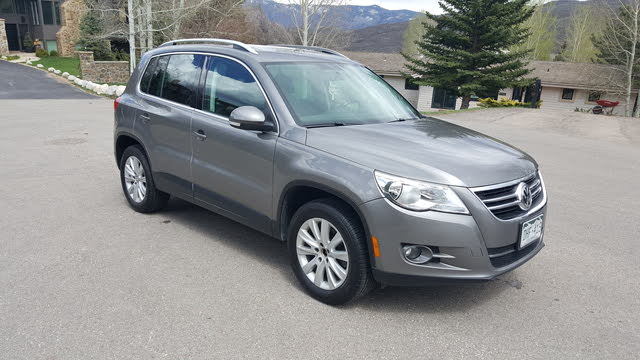 Average user score
4.5 ⁄ 5 stars
Based on 14 reviews
Finally, A Cuv That Is Built For Driving! by DKE783 — The Tiguan, in full trim, is a near- luxury CUV that is still a big secret in the industry. The VW costs 10% more than a RAV4 or CRV, but offers 30% better build quality. Fit and finish are super... Read more
A Real Treat To Drive And Own - My Best Vehicle Ever! by Kas55 — This is the best vehicle I have driven to date. I had a Honda CRV for four years, and there is just no comparison. The Tiguan is far sturdier, the ride is smooth and the handling extremely easy. I hav... Read more
Go Test Drive One!!! by Ruth — Impressive handling, performance and great fuel economy not to mention the best warranty package offered world wide. Electromechanical power steering (no power steering fluid) makes the vehicle extrem... Read more

Despite its rather odd moniker, the 2010 Volkswagen Tiguan is a solid choice in a small yet family-friendly SUV. Allegedly the name “Tiguan” is a combination of “tiger” and “iguana,” with nobody quite able to see the connection. In any case, this well-regarded five-door, five-passenger compact SUV is available in three trim levels, the S, the SE, and the SEL, with all delivered with standard front-wheel drive (FWD). Volkswagen’s 4Motion all-wheel-drive system (AWD) is, however, optional with the SE and SEL trims. Stylish, well-mannered, and long on performance - the word “sporty” has even been tossed around - the Tiguan isn’t just another pretty face. Cargo area is a generous 119 cubic feet with the rear seats folded, and standard amenities are in abundance in a nicely thought out cabin design. Alas, beware that there are minor rumblings of discontent at a certain lack of cabin storage space.

Options for the 2010 Tiguan range from up-sized alloy wheels, Bluetooth, and a Class II trailer hitch for the S trim to touch-screen DVD navigation, a rear-view camera system, and a huge power-operated sunroof for the SE and SEL.

Though regarded as one of the best compact SUVs on the market, the 2010 Tiguan is not without its faults. Owners of ’09 Tiguans complain about such glitches as turbo-lag, a dearth of exterior colors, little cabin storage space, and the distressing lack of turbodiesel availability. A larger gas tank, minor customer service issues, and sub-standard audio components also drew owner complaints.

In general, however, better-than-expected mileage, performance, handling, a firm-but-comfortable ride, and sublime exterior styling have owners praising the ’09 Tiguan. Such individual features as the panoramic sunroof, placid cabin, available AWD, and easy-to-decipher DVD navigation system also draw kudos from owners of the 2009 Volkswagen Tiguan, all of which bodes well for 2010.

What's your take on the 2010 Volkswagen Tiguan?

Users ranked 2010 Volkswagen Tiguan against other cars which they drove/owned. Each ranking was based on 9 categories. Here is the summary of top rankings.

Have you driven a 2010 Volkswagen Tiguan?
Rank This Car

What Could Cause #2 Cylinder To Misfire On A 2010 Vw Tiguan.

Can You Install Ignition Tumbler Wrong?

Started with cylinder 1 misfire code about 6 months ago on tiguan. Could feel it "misfire" when driving. Replaced spark plug for cyl. 1 .... did not help. Replaced cyln. 1 coil.... could feel somew...

I have done everything I know to release open the fuel door but it does not open. I am getting desperate, pls help.

How Can I Release The Shift Button To Get Out Of Drive?

My car is stuck in drive or lower. The release button to back into reverse or park is stuck in depressed position. I have tried to move the yellow tab under the lever cover, but no luck. Any idea...