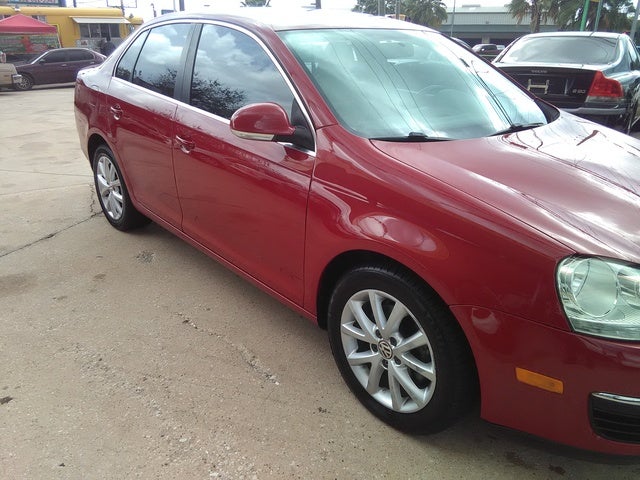 With a plethora of standard features, numerous powertrain combinations, a well-mannered ride, and a Euro-quality feel, the 2010 Volkswagen Jetta just keeps on keepin’ on.

The Jetta has carved a unique niche for itself as the premier bargain-priced European sedan offered in the U.S. That said, don’t expect Corinthian leather, three-second 0-60 times, or sexy looks. Instead, look for decent performance, reasonable handling, comfortable cruising, and a turbodiesel-equipped TDI trim that rivals the fuel economy found in many hybrid automobiles.

Volkswagen’s 2010 Jetta is the direct descendant of a mid-1980’s sedan concept to replace its then-aging Rabbit Hatchback. Today’s Jetta is a more-than-competent compact sedan that’s available in the S, SE, TDI, or top-shelf SEL trim level. Additionally, the Jetta is also offered in the Wolfsburg Edition, which is, at its core, a turbocharged SEL.

With its better-than-adequate list of standard features and options, not to mention its plethora of powertrain choices, the 2010 Jetta combines cabin room, engine performance, handling, and some refreshed interior and exterior dressing to present an attractive value in the small sedan market. Never known as a styling leader, Volkswagen has, mercifully, begun to abandon its ill-conceived efforts at uber-styling in returning the Jetta, not to mention the rest of its vehicles, to their staid-yet-functional origins.

This well-conceived sedan is capable of carrying five passengers, with split-folding rear seats allowing it to add significantly to its already capacious 16-cubic-foot trunk capacity. Competitors such as the Mazda3, Ford Fusion, and Honda Civic are going to have their hands full contending with this compact VW. 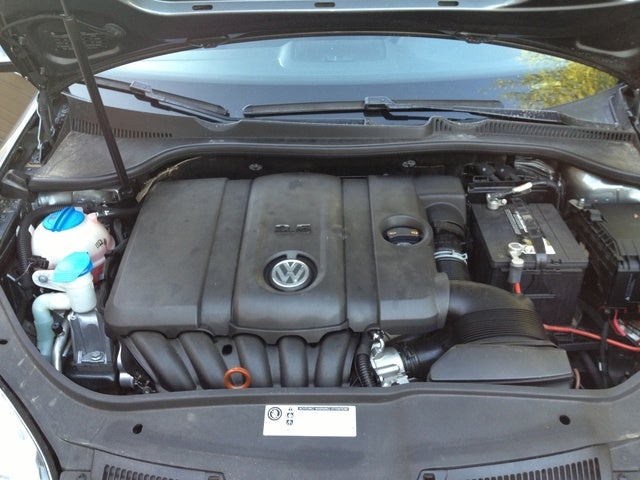 For 2010, the Volkswagen Jetta can be equipped with one of three engines and one of four transmissions. The standard powertrain for the base S and midlevel SE, as well as the top-shelf SEL, is a 2.5-liter inline 5-cylinder engine (I5) and 5-speed manual transmission. This combination puts out 170 hp and 177 lb-ft of torque that are alleged to take the Jetta from 0-60 in 8.6 seconds. Additionally, a 6-speed auto-manual transmission is also available for the Jetta S. The EPA estimates 22/30 mpg with the manual transmission, and 23/30 with the auto-manual.

A 2.0-liter turbocharged, gasoline-powered inline 4-cylinder engine (I4) equips the Jetta Wolfsburg Edition, along with a standard 6-speed manual transmission. This combo generates 200 hp and 207 lb-ft of torque and gets 21/31. The Wolfsburg Edition, additionally, can be delivered with the optional dual-clutch DSG auto-manual transmission, in which case fuel efficiency rises to 24/32. The 0-60 time improves to 7 seconds with the 2.0-liter turbo I4.

Finally, the Jetta TDI trim level boasts an inline 4-cylinder 2.0-liter turbodiesel that’s good for 140 hp and an incredible 236 lb-ft of torque with either the well-regarded, standard DSG auto-manual transmission or the available 6-speed manual gearbox. The TDI is tested at 0-60 in 8.9 seconds and gets some 30/41 with the manual transmission and 30/42 with the DSG auto-manual.

Reviewers find the gas-powered 2.5-liter I5 to be reasonably quick off the line, with adequate merging and passing power, however, many reviewers feel that mileage could be better. The 2.0-liter turbocharged I4 gasoline engine, meanwhile, springs off the line, but is subject to a bit of turbo-lag. Reviewers find the TDI’s 2.0-liter turbodiesel I4 to be a tad slower off the line and in reaching its top end; it’s a bit noisier, too. None of this, however, is bothersome enough to outweigh its impressive mileage numbers.

Virtually all professional reviewers find the 2010 Volkswagen Jetta S and SE trims to ride effortlessly and comfortably over nearly any paved surface on their standard 16-inch wheels. With all trims featuring four-wheel independent suspensions, MacPherson front struts, front and rear stabilizer bars, and multi-link rear ends, it seems that wheel size is the difference-maker in the somewhat less composed ride of the SEL and Wolfsburg Edition with their standard 17-inch tires. The optional 18-inch wheels available for both make for, if anything, an even rougher ride.

The Jetta’s steering is described by most reviewers as decently weighted and reasonably alert, but cornering is noted as a bit eerie with more body lean than might be expected. The TDI trim is noted, as well, to show a smidgen more vibration on uneven roads, as well as making more of a racket at highway speeds. Its huge torque capabilities, however, make the TDI a formidable presence on downtown streets.

Generally, professional reviewers find the Jetta to offer a placid and comfortable, if far from sporty, ride, certainly better than expected for its price level. The Jetta’s cabin in all versions is noted as reasonably free of wind and road noise.

Though offered at an affordable price, the 2010 Volkswagen Jetta doesn’t skimp on the amenities, though options can drive its cost of ownership up considerably. Most reviewers are impressed with the Jetta’s cabin appointments and generally refined cabin, not to mention its well-placed, well-marked gauges and controls. Many professional reviewers note, as well, that the passenger space in the compact Jetta rivals that of many far larger vehicles.

Options for the 2010 Jetta progress from the power sunroof, Jetta Motor Sport Kit with various appearance upgrades, 17-inch or 18-inch alloy wheels and floor mats with both versions of the S trim to touch-screen DVD navigation for the SE trim levels. The Jetta SEL, Wolfsburg Edition, and TDI each offer such additional options as spoilers and upgraded paint, as well as ground effects packages.

Owners of the 2010 Volkswagen Jetta, though overwhelmingly satisfied with this compact, do have a few complaints. One of the biggest concerns is poor rearward visibility due to extra-wide roof pillars and intrusive rear headrests. Most other complaints involve such details as the lack of auto-dimming rear-view mirrors, trip computer, and memory for driver’s settings for seats and mirrors. Additionally the lack of available front fog/driving lights, as well as the unavailability of an automatic climate control system disappoints a few owners.

On the positive side, owners applaud the Jetta’s ride and handling, pickup and performance, cabin ambiance and comfort, and its generous gas mileage, especially the TDI trim’s turbodiesel. The touchscreen audio screen also draws praise from owners, as does the Jetta’s smooth-as-butter DSG auto-manual transmission. Virtually all owners also praise the value they receive from the 2010 Jetta.

What's your take on the 2010 Volkswagen Jetta?

GuruDF917 I have a 2010 VW Jetta 2.0T TSI . This car has one problem after another. Transmission problems, Power Steering problems, electrical problems, fuel economy problems, ignition key problems, etc... I can go on and on for hours complaining about this car.

Users ranked 2010 Volkswagen Jetta against other cars which they drove/owned. Each ranking was based on 9 categories. Here is the summary of top rankings.

Have you driven a 2010 Volkswagen Jetta?
Rank This Car

Their sizes and shapes are pretty same, but Im interested if light connector and fixation parts would fit.

I just had the entire ignition switch replaced on my jetta because the prior switch jammed with the key stuck in it. I now have a new key/key fob for the new ignition and now the car starts for a c...

My Battery Keeps Draining And My Car Won't Start In The Morning.

I've had my car into the dealership and they say the battery and alternator are fine. They also said the parasitic draw test showed nothing. I'm suspicious of the radio. It died about 10 weeks ag...

How Much Does It Cost To List My Car On Your Site?

Does it cost to list my vehicle on your site? Do you make a percentage off my sale?

Using A Lot Of Gas But No Smell Or Leak