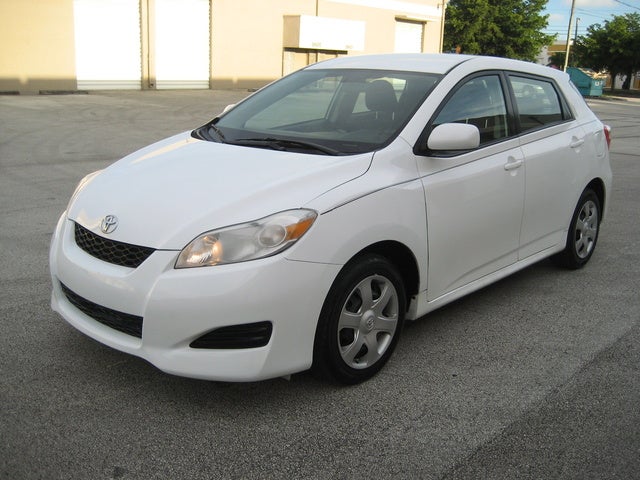 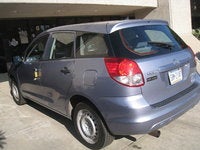 Average user score
4 ⁄ 5 stars
Based on 10 reviews
Nice Simple Ride by Hailey — Gas n mileage is fine, performance is great, still on lease and great service from the dealership. It looks nice inside n out but it does not have alot of trunk space for groceriea or a folded stroll... Read more
Review by Juan — Great car. Great gas mileage. Toyota is a reliable company. Read more
Great Family Cargo Car by MBScooby — This is one of the best cars I have ever owned. It looked great and stylish from the day we got it to two years later covered in snow. It's sporty, fun to drive, handles well and can hold a bunch of s... Read more

Toyota seems to need some time to refine its compact offerings, not to mention a little bit of style, especially considering the younger skew of the target demographic. While the AWD system sets the Matrix apart from its competitors, its shortcomings more than outweigh its appeal. The Base trim has far too many negatives to consider anything other than an S or XRS, for the benefits of the 2.4-liter engine alone.

The Toyota Matrix sees traction control and anti-skid now standard for all trims in 2010, following 2009’s redesign. Otherwise, this five-door wagon, essentially a hatchback version of the Corolla, sees no changes for 2010, available in three trim levels in front- and all-wheel drive.

Base trims get a 1.8-liter four-cylinder engine mated to a five-speed manual or four-speed automatic transmission. S and XRS trims come with a 2.4-liter four-cylinder and are available with a five-speed manual or automatic transmission, although S trims configured with the optional AWD system get a four-speed automatic. The AWD S and the XRS both come with an independent rear suspension system, as opposed to the torsion-beam suspension on remaining trims.

The 1.8-liter engine that also serves as the base engine in the Corolla is similarly underpowered in the Matrix, a problem that's exacerbated by this vehicle’s increased weight - the Matrix is more than 200 pounds heavier than the Corolla. Additionally, sound dampening seems to be less effective here than in the Corolla, and the excessive noise produced by the 1.8-liter, especially under load, is only magnified here.

Indeed, even the 2.4-liter, praised for its refinement in the Corolla, produces harsh tones under load in the Matrix, although power is generally adequate, though it requires deep stabbing of the accelerator to find. The manual transmission produces a much punchier feel, if not extra power, and the four-speed transmission standard on the AWD S trim doesn’t seem to hurt performance, although mileage does suffer at 20/26 mpg versus 21/28 for the five-speed manual and 21/29 with the five-speed automatic.

The 1.8 manages 26/32 with the five-speed manual and 25/31 with the four-speed automatic. The Matrix uses regular-grade fuel, regardless of trim or configuration.

The Matrix offers capable bump absorption in Base and S trims, although the sport suspension of the XRS allows these imperfections to resonate harshly. That suspension does a fine job of increasing the paltry grip and lean resistance of the Base and S trims, however it’s up to the driver to determine if it’s worth the sacrifice in ride comfort. Steering is again a weakness in the Matrix, although seemingly not as exaggerated as in the Corolla. Braking, at any rate, is at least adequate, with good stopping power and pedal feel.

Poor materials, poor assembly, and poor finish seem the intent in the Matrix, as they are inherent at every level, with cheap hard plastics making up the overwhelming majority of surfaces. Many testers and owners alike have found misaligned surfaces as well as squeaks and rattles throughout the interior.

Gauges are hard to read, both from washout and vague type, although most are well-placed and controls seem easy to operate and reach. Wind and road noise permeate the cabin increasingly as speed rises, and the larger wheels of the XRS produce a noticeable thrum.

Headroom is ample thanks to the tall design of the Matrix, but leg- and kneeroom are in short supply, front and back. Firm seats fatigue during longer trips, and rearward visibility is hampered by the hatchback design.

By far the most numerous complaints heard regarding the 2010 Toyota Matrix revolve around the interior, with its poor construction and cheap materials. Fuel economy is quite impressive, as is cargo room, and the option of AWD is refreshing, although it’d be nice to not be stuck with a four-speed automatic. Unpredictable suspensions could use some tweaking, with neither camp seeming to be completely happy with either the base or sport setup.

Have you driven a 2010 Toyota Matrix?
Rank This Car

The other day I found a plastic piece lying on the passenger's side floor mat. It is roughly "U"-shaped, dark grey plastic. It is hollow, and approximately 2.25" across the base, 3.25" across the ...

My matrix has had all electrical flicker off for seconds and at the same time i lose power steering, what would that be?

225 views with 1 answer (last answer about a year ago)

2010 Toyota Matrix Dash Lights All On, Crank No Start

I have a Toyota Matrix base model 2010 Manual The other day, after driving already that morning, I went to start my car and it was cranking, radio etc working but not engaging. Left it a while ...

Happens when: -Cold start (first drive of the day), and - When switching the key to start the car and don’t release the key right away but keep it at Ignition for a couple of seconds. Already replac...