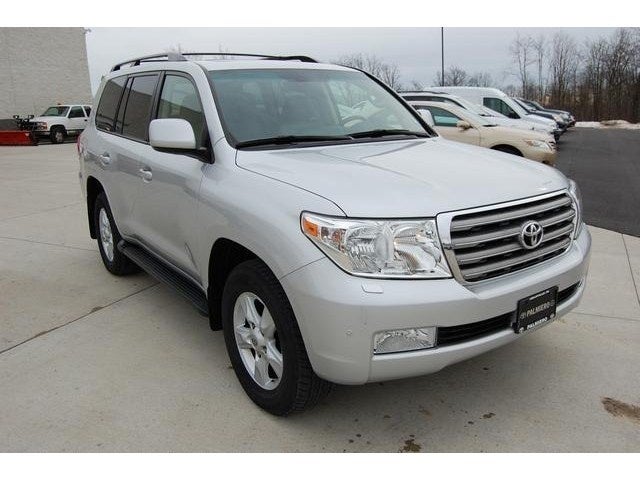 The 2010 Toyota Land Cruiser is once again in the running for king of the SUV mountain. The Land Cruiser remains an awesome combination of extreme off-road capability, on-road comfort, and in-cabin luxury. Yes, it’s pricey ($65,970 MSRP), and it’s overkill if you use it only to run errands and pick up the kids from school, but for those who need to travel off road and want to do it in style, the Land Cruiser is a must-see and, in the end, a likely must-have.

The Land Cruiser was last redesigned in 2008, but there are some noteworthy changes for 2010. Toyota adds its HomeLink universal transceiver with Safety Connect to help with emergency assistance after crashes and recovering the vehicle if it’s stolen (think OnStar). Further technological additions include Bluetooth streaming audio, a USB jack for an iPod or other MP3 device, and real-time traffic for the optional navigation system.

The 2010 Land Cruiser (which comes in just one trim) also gets an upgrade in power with a 5.7-liter, 32-valve V8 that churns out 381 horsepower at 5,600 rpm and a whopping 401 lb-ft of torque at 3,600 rpm. This power boost helps offset the vehicle’s 5,688-pound curb weight. The V8 is paired with a six-speed, electronically controlled automatic transmission with overdrive and intelligence (ECT-i), sequential shift mode, and uphill/downhill logic. It gets just 13 city/18 highway mpg, but that’s to be expected with this type of SUV. With the right equipment, the Land Cruiser can tow 8,500 pounds.

With its body-on-frame construction, the Land Cruiser is built to tackle off-road terrain, and Toyota also gave it plenty of technology to assist with off-road adventures. First, there’s the full-time four-wheel-drive system with a Torsen locking center differential. The Kinetic Dynamic Suspension System stiffens or loosens the front and rear antiroll bars as needed, creating less body roll when cornering on paved surfaces and greater wheel articulation for handling the irregularities when the pavement stops. Toyota’s “Crawl Control” automatically controls the throttle and brakes when the terrain gets the toughest, allowing the driver to focus on steering. And if you happen to get stuck on a nasty bolder or super-steep incline, there’s Hill Start Assist.

Other standard performance features include Active Traction Control, Vehicle Stability Control, speed-sensing and power-assisted rack-and-pinion steering, and power-assisted four-piston front/two-piston rear ventilated disc brakes with a multi-terrain antilock brake system with electronic brakeforce distribution and brake assist. All of this technology may save your hide in the wild, but it also makes driving on roads a breeze. Basically the Cruiser handles like an oversized Camry that can seat eight and climb a mountain in a pinch.

If someone led you blindfolded into the Land Cruiser’s interior, you might think you had entered a luxury sedan when the blindfold came off. The cabin is loaded with convenience features, immaculately constructed, sensibly laid out, and covered in rich, padded surfaces. The driver’s seat is 10-way power adjustable, the passenger 8-way, and both are heated and leather-trimmed. The second-row bench is also leather and has a 40/20/40 split. The third-row leather bench has a 50/50 split. While the first two rows are roomy and comfortable, the third row is best suited for children.

With all three rows up, the Land Cruiser provides 16.1 cubic feet of cargo space behind the third row. With the third row folded (a task some feel is harder than it should be), it offers 43 cubic feet, and with both the third and second rows folded flat, it has 81.7 cubic feet of space. Interior storage also includes 12 cup and bottle holders, center console storage, and front and rear door and front seatback pockets.

What's your take on the 2010 Toyota Land Cruiser?

Iswara_1531 wow! i have wanted one forever

Users ranked 2010 Toyota Land Cruiser against other cars which they drove/owned. Each ranking was based on 9 categories. Here is the summary of top rankings.

Have you driven a 2010 Toyota Land Cruiser?
Rank This Car

Im Look For A Car ,for Work Don't Have A Car My Daugter Is Takeing Me To Wo...

please help me get a car .thankyou