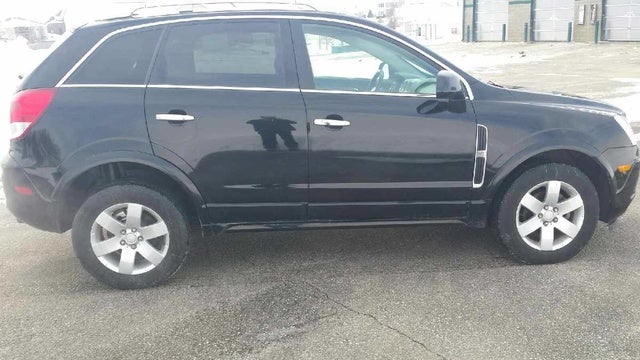 Class-leading handling and controls put the 2010 Saturn VUE in a unique spot among competitors in the compact crossover category.

Sluggish performance from its base engine and seats that seem inadequate for taller drivers are two sore spots for the 2010 Saturn VUE.

The Saturn VUE very well may be the best option in the compact crossover category - unless you fall far on the high side of the 6-foot divide, that is. Avoid the four-cylinder, customize it to your liking, and you really can’t go wrong with a vehicle that truly provides car handling and SUV utility. Just make sure you don’t mind seeing dozens of them on the road, as the VUE’s popularity doesn’t seem like it’s going anywhere anytime soon.

Since 2008, the Saturn VUE has been based on the Astra, manufactured by GM’s European property - Opel. This five-door crossover is available with front- or all-wheel drive and comes with available four- or six-cylinder engines, as well as a new-for-2010 hybrid trim.

The oldest model in its lineup, the VUE is Saturn’s best-selling model as well, and the first to be produced using GM's Theta platform. Along with the Chevrolet HHR, it is manufactured in Ramos Arizpe, Mexico.

Front-wheel-drive XE trims are powered by a 2.4-liter Ecotech four-cylinder, good for 164 hp and 160 lb-ft of torque. With its four-speed automatic transmission, no one is accusing it of excessive power, although it’s a smooth-shifting and competent combination, producing an EPA-estimated 19/26 mpg.

Moving up to the AWD XE means a 3.5-liter V6 sits in front of the firewall, producing 215 hp and 220 lb-ft of torque. These come standard with a six-speed automatic that has found criticism for both its reluctance to downshift and its tendency to hunt for a proper gear under strain. The extra power comes with a 3-mpg penalty in both city and highway travel, for an EPA estimate of 16/23.

The XR gets even more power with a 3.6-liter V6 that pushes an extra 35 hp and 23 lb-ft of torque through the six-speed automatic. Even with the extra power, AWD trims with the 3.6 still manage 16/23, and for those who choose the front-wheel-drive V6 XR, an extra mpg awaits on both ends, for a final estimate of 17/24. The 3.6 is not a loud engine, but you will hear it, and it’s not totally unpleasant.

Hybrid models pair a 2.4-liter four-cylinder with a battery-powered electric motor. With its four-speed automatic transmission, EPA estimates show efficiency of 25/32. While this is hardly a stunning mileage increase, the Hybrid has been praised for its smooth and unobtrusive power delivery.

The Saturn VUE has received extensive praise for its comfortable and competent handling, providing compliance over bumps and composure in turns. Some have even gone so far as to describe it as “class leading,” although the overall popularity of the model may influence opinion slightly here. It’s good, but certainly not astonishingly so.

XR models come with a sport-tuned suspension and larger wheels that don’t seem to increase the harshness of the ride, but don’t seem to increase sportiness much, either. Steering is pleasantly effortless around town and has a progressively increasing presence at speed that inspires confidence. A surprising amount of owners have mentioned impressive wind-damping, saying the VUE provides a quiet ride even in heavy winds.

Perhaps another reason for the VUE’s continued popularity, its interior design, layout, and materials have been described by many as “best in class.” Unfortunately, the same can’t be said for the seats. Too little cushioning, short seat bottoms, and reclining rear seats that seem to recline symbolically rather than functionally all hurt the overall experience.

While taller occupants will find headroom to spare, legroom and support are sadly lacking. At the very least, the Saturn seems to avoid the visibility problems that plague its non-crossover SUV brethren.

NHTSA test results give the VUE five stars in all but the rollover category, in which it earned four stars.

Owners have been impressed with the ride and handling of the VUE, as well as the available power from the two V6 engines. The same cannot be said about its four-cylinder, however, and the enjoyment of the ride is severely hampered by uncomfortable seats. Still, it doesn’t seem enough to turn off consumers, as the VUE continues to be Saturn’s longest-running and best-selling model.

GuruT13CM I am not a very tall person. I'm only 5'4". But I too find the seats not comfortable enough. I find them sort of short. The seat itself. My previous cars came out longer to support the upper back of my legs. I could use a little more power as I'm a fast driver, but very safe and when I need the vehicle to quickly pick up and go, its a hair sluggish.

Guru9B6RMP I had the 2010 Saturn Vue after about 180k the trnasmission went. Then the steering went twice had to replace some big part in the steering system can't remember the name but steering could have went out when I was driving it was that dangerous. Good car up until then nothing special but the one I had was trouble after 180k

Have you driven a 2010 Saturn VUE?
Rank This Car

I Have A 2010 Saturn Vue With The Engine Keep Over Heating But Am Not Loos...