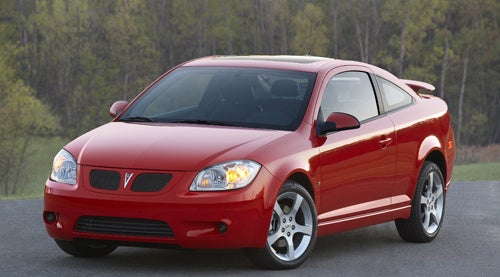 The Pontiac G5 compact sport coupe rolls into 2010 with no changes, other than the addition of Crystal Red Tintcoat and Carbon Black Metallic as new exterior colors. As in previous years, Pontiac offers the G5 in Base and GT trims.

Given GM's decision to phase out the Pontiac brand by the end of 2010, the current version of the G5 will no doubt be the last. Introduced in 2007 as a replacement for the Pontiac Sunfire coupe, the five-passenger, two-door, front-wheel-drive G5 mimics the Chevy Cobalt in just about every way, except for a few exterior styling differences and alternate badging, so the basic car itself won't disappear after 2010, but the G5 name will.

Despite its designation as an entry-level compact coupe, the G5 comes equipped with a number of desirable standard features, including head curtain side-impact airbags and one year of OnStar with the Safe and Sound plan, which includes roadside assistance, remote door unlock, automatic crash response, and stolen vehicle assistance. The GT trim adds a sport-tuned suspension and GM's StabiliTrak electronic stability control system, which reduces engine torque and applies brake pressure to individual wheels when needed to help drivers maintain control of the vehicle in slippery road conditions or emergency situations.

The 2010 G5 delivers exceptional gas mileage of up to 37 mpg. On the downside, that good gas mileage is due to its somewhat anemic 2.2-liter inline four-cylinder (I4) engine, which produces 155 hp and links to a five-speed manual transmission or a four-speed automatic (optional in the base trim, standard in the GT trim). Although the four-cylinder gets the G5 off the mark well enough, it lacks the punch required for aggressive passing situations or fast-paced maneuvers. As a result, many reviewers and owners consider the G5 underpowered for a sport coupe. The G5 gets decent marks for its smooth, comfortable ride, although owners note considerable body lean in tight corners.

Standard features for the Base G5 include reclining front cloth bucket seats with manual lumbar support, air conditioning with air filtration, remote keyless entry, power windows and door locks, and an AM/FM audio system with a CD player and an MP3 input jack. Instrumentation includes a tachometer and a Driver Information Center with an outside temperature display. Owners can add a power tilt/slide sunroof as an option.

Outside, the G5 comes equipped with a rear spoiler and rides on 15-inch wheels. Antilock brakes and traction control come standard on the GT and are optional on the G5 Base.

The Driver's side power windows both front and rear will not operate. The passenger side windows operate just fine. There doesn't seem to be separate fuses for the 2 sides so what else could it be?