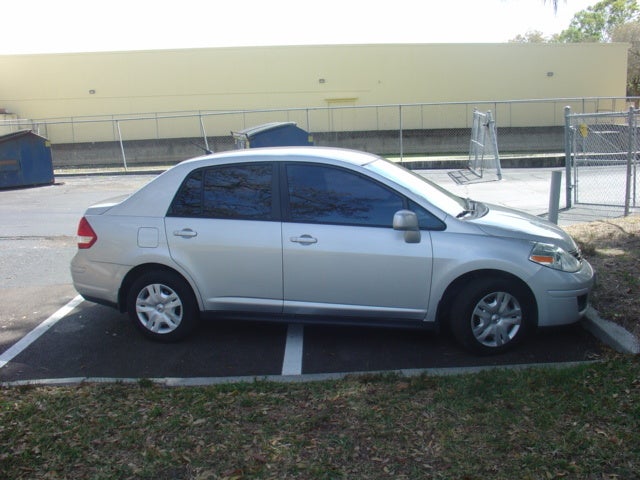 Its nimble handling, comfortably roomy cabin, and high-quality construction make the 2010 Nissan Versa feel like more than a compact economy car, until the amazingly affordable price reminds you that’s exactly what it is.

You’ll have to spend more than the attractive base price to get even the most basic amenities, a drivetrain that won’t leave you crawling off the line, or the full complement of safety features for the 2010 Versa. 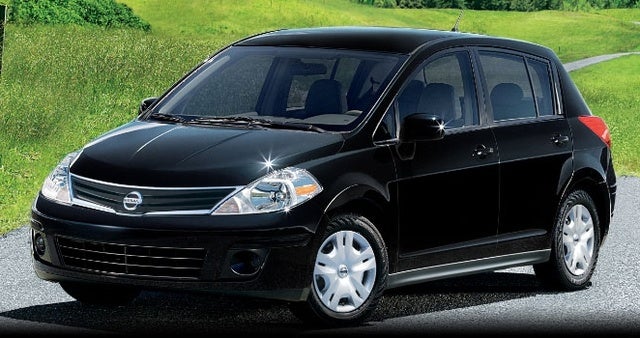 The 2010 Nissan Versa delivers the fuel efficiency, affordability, and reliability consumers want in an economy car, and then offers performance, passenger space, and with the hatchback, cargo room that bely its compact stature. And even if the low-end trims are bereft of accessories, all the gadgets are available for a few more dollars.

If you want to buy new but also want to keep it inexpensive, the 2010 Nissan Versa is a must-see. The base Versa starts around $10,000, a price that is seriously hard to beat. The base provides the interior space, comfort, and reliably sound performance that are highlights for all Versa trims. But the base lacks a stereo, air conditioning, power locks and windows, and a host of other features that can be found on other base economy compact models.

The Versa makes few changes for 2010, so searching for a well-equipped 2009 might put you in a Versa with a radio at a low price. The 2010 version comes in six trim levels – the entry-level 1.6 Base and 1.6; midlevel 1.8 S; high-end 1.8 SL; and the two hatchback trims, the 1.8 S and 1.8 SL. The sedan-only 1.6 trims come with a 1.6-liter, 107-hp four-cylinder engine and five-speed manual transmission. The 1.8 trims all come with a 1.8-liter, 122-horsepower engine. The 1.8 S trims (both sedan and hatchback) come standard with a six-speed manual transmission, the 1.8 SL sedan with a four-speed automatic, and the 1.8 SL hatchback with an Xtronic Continuously Variable Transmission.

Versa sedans are probably best suited for commuting, first-time new car owners or small families. The hatchback and its additional space are more versatile, and it also has a more distinct style than the sedan, which has a plain, boxy look. But if you want style, chances are you’re not shopping around in the compact economy class. If you want fuel efficiency, comfort, solid handling, and a surprising amount of space at a fantastically low price, take the Versa for a test drive. 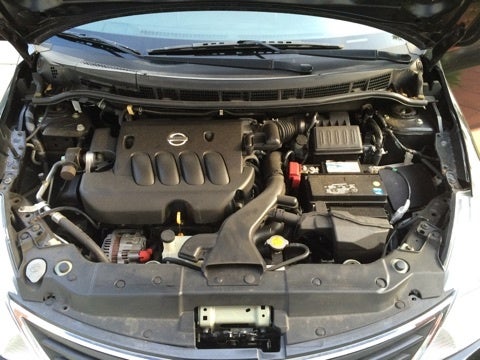 The 1.6 Base is powered by a 1.6-liter four cylinder that produces 107 horsepower at 6,000 rpm and 111 lb-ft of torque at 4,600 rpm, is paired with a five-speed manual transmission, and gets 26 city/34 highway mpg. The 1.6 shares a drivetrain with the Base, but offers an optional four-speed automatic transmission that provides 26/33 mpg.

The 1.8 S sedan and hatchback have identical drivetrains – a 1.8-liter four cylinder (122 horsepower at 5,200 rpm, and 127 lb-ft of torque at 4,800 rpm) with six-speed manual transmissions that get 26/31 mpg. Both trims are also available with a four-speed automatic transmission. The 1.8 SL sedan and hatchback also share the 1.8-liter, 122-horsepower four-cylinder, but the sedan comes standard with a four-speed automatic and gets 24/32 mpg, while the hatchback comes with the CVT transmission and gets 28/34 mpg.

Critics generally agree that the manual transmission options are more vigorous than the four-speed automatic, which can feel especially weak at low speeds. They also agree that the CVT is livelier still, providing drivers with more power from a stop or in passing or merging situations.

Regardless of trim level, the Versa’s performance is lauded by critics as dexterous, responsive, and enjoyable. It’s clearly among the top performers in its class.

The Versa’s steering is especially pleasant, with an easy feel and supremely tight turning radius. The relatively long wheelbase lets the Versa handle rough road surfaces with grace. Those two factors, plus the car’s well-balanced construction, allow for smooth cornering with little body lean and a ride that can surprise you with some very fun moments. And if you start to have too much fun, the braking is reliable with straight stop lines.

Acceleration is not a strong suit, especially if the 1.6-liter is paired with the optional four-speed automatic transmission. The five- and six-speed manual transmissions give you more flexibility and pop, but require a lot of shifting at low speeds and a heavy foot on the gas to get the most out of either the 1.6 or 1.8 engines.

The Versa is also a delight to take on large trips, especially when compared to the rest of the class. The front seats are plenty big enough for even large adults, and the sight lines are unimpeded in all directions. The rear seat is equally large, though probably not big enough to seat three adults for an extended period of time. But two large adults will have plenty of room for shoulders, knees, heads, and every other body part.

There are two schools of thought when it comes to interior features for the Versa. One, the 1.6 Base is so barebones (no air conditioning, stereo, or power anything) that almost no one would want it. Or two, the Versa’s low starting price allows owners to personalize it with their own features, and the vehicle remains affordable.

Reviewers generally like the material and construction quality of the Versa cabin. And one benefit of few features is the simplicity of a dashboard uncluttered with knobs, buttons, and gauges.

The 1.6 Base comes with little more than a tilt steering column, four-way manually adjustable front seats, and audio pre-wiring. The 1.6 doesn’t add much, but it does get a four-speaker AM/FM/CD stereo with an auxiliary input jack and air conditioning, two essentials for most drivers. The 1.8 S sedan and hatchback get chrome accents inside and out as well as a digital clock, and have available power locks, windows, and mirrors. The 1.8 SL trim comes standard with cruise control, remote entry, power locks and windows, six-way manually adjustable front seats, and a premium six-speaker AM/FM/CD stereo with iPod interface and speed-sensitive volume control.

The Versa sedan's 13.8-cubic-foot trunk is roomy for a compact economy vehicle. But if you need more room, the Versa hatchback can certainly provide that. With the rear seats up, it offers 17.8 cubic feet of space under the hatch, and with them down, that expands to 50.4 cubic feet. Those rear seats don’t fold flat, however, creating an uneven cargo floor that can be awkward.

The good news is that the Versa earned four stars for front driver and passenger, side driver, and side rear passenger protection in government crash tests. And the insurance industry named Versa a “Top Safety Pick.”

The bad news is that all of the Versa’s safety features are not standard on all trims, but again this fits with Nissan’s goal of getting the base models to the lowest possible price. Not until you get to the 1.8 sedan trim do Versas come standard with four-wheel antilock brakes with brakeforce distribution, brake assist, a vehicle dynamic control system, and traction control. The 1.8 S hatchback has four-wheel antilock brakes with EBD, but the vehicle dynamic control and traction control are standard only on the 1.8 SL hatchback.

Very few owners and drivers are disappointed with their Versa. One of the most common compliments Versa owners lavish on their car is praise for its seats, both in terms of comfort and the sight lines their high perches provide. Owners also love the Versa’s fuel efficiency, peppy handling, and roomy cabin feel.

There are few owner complaints for the Versa, as most consumers seemed to know what they were getting into before they bought the car. So they may complain a bit about lack of acceleration or the lack of some standard features, but with the common caveat of, “What else would you expect for such a great price?” The one recurring negative that wasn’t taken with a grain of salt was substandard hubcaps that are both unstylish and prone to coming off.

Users ranked 2010 Nissan Versa against other cars which they drove/owned. Each ranking was based on 9 categories. Here is the summary of top rankings.

Have you driven a 2010 Nissan Versa?
Rank This Car

How Much Does It Cost To Sell My Car?

on this service, how much?

Hello all, My Versa didn't want to start up today. At first inserting the key and turn part way lit up the dash lights and turned on the radio, however turning the rest of the way to start the car h...

Does the water pump on a 2010 Nissan versa require titanium bolts? The guy working on our car is replacing the water pump and said two bolts were missing and they should have been replaced with titan...

How Do I Contact The Owner Of A Car By Phone?

i was wondering how to contact the private owner (salah) about his 2010 nissan for $2995. i had some questions i would like to ask him. i am looking for a used car for a friend. my email address is ...